Home » All books » A Circle of Sisters: The MacDonalds 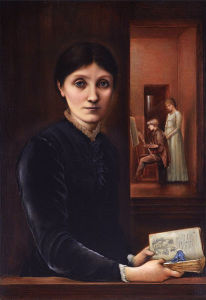 Remarkably, four daughters of a nineteenth century Methodist minister became powerful and feted by Victorian society – against all odds. The girls were born into a relatively impoverished family; their father being a minister who moved around the country and their mother the daughter of a wholesale grocer.

The had few advantages. They weren’t particularly educated. In that society in those days, girls were expected to marry and the only skills they needed were those of running a home.

And it wasn’t expected that the MacDonald sisters would make exceptional marriages. The family wasn’t well-connected and didn’t move in society circles. They weren’t even particularly good-looking.

Although these four women are remembered today because of the men they married -or gave birth to – this is not to overlook their importance.  They provided the family structure which allowed these men to thrive and achieve their diverse successes. What’s more,they lived in a remarkable period of history, being born between  1837 (Alice, the eldest) and 1845 (the youngest of the four, Louisa.)

In effect, the four women were of low birth but the development of the nineteenth and early twentieth centuries gave them the opportunities to become confidantes and intimates of the cream of the political and creative worlds.

How did this happen? The book you see here tells the full story of these remarkable women and their strong family ties.

Curiously, when their father was fourteen years old, he was at Woodhouse Grove School in Yorkshire. During his stay there, his headmaster’s niece, Maria Bramwell,  married the local curate, Patrick Brontë. They too had remarkable daughters. See below.