A day at Sandringham

Home » Royalty » A day at Sandringham

A day at Sandringham House in Victorian times 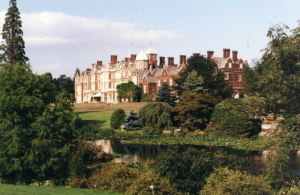 Sandringham House in Norfolk is a royal residence. You can visit the house these days – it has a museum,splendid grounds, a restaurant – but what was it like in Victorian times when it first came into royal possession?

Today’s royal family prefers Balmoral for their family get-togethers and holidays but in Victorian times it was a favourite of the family and the residence of the Prince of Wales. Queen Victoria had purchased the property in 1862 on behalf of her eldest son the prince, who would become King Edward VII.

When Edward and his new bride Princess Alexandra first took possession, it was an eighteenth century building but was in poor condition and rather small so the prince had a new home built on the land – the Sandringham House we know today.

It became one of the country’s greatest social centres. The Prince of Wales loved to entertain, as the king-in-waiting he enjoyed company and the pleasures of the land. The house was furnished in typical Victorian style – cluttered with plushfurniture, bric-a-brac, ornaments, photographs and mounted animal heads. But it atmosphere was unstuffy and welcoming.

Although there was naturally a staff, guests found that it was like a family home and that often it was the Prince or Princess of Wales who showed them to their rooms. The prince was eclectic in the guests he chose – foreign dignitaries would find themselves rubbing shoulders with sportsmen, soldiers, industrialists, clergymen – and beautiful women,of course. Because it was here that the prince also entertained his mistresses.

The prince enjoyed the company of women so abolished the tradition of the ladies leaving the dining room leaving the men to their cigars and brandy after dinner.

Both the prince and the princess were fun-loving. They and their guests played silly games, practical jokes and outdoor activities and there was dancing every evening. But the prince’s greatest enjoyment, possibly with the exception of his mistresses, was shooting. Every weekday he and other guests would set off into the extensive grounds with bearers and beaters  to terrorise the local bird life.

This was something that was considered to be quite normal in those days, unlike today. In the eyes of most people in the country, this was accepted and even desirable behaviour for a country gentleman. And this is what the prince was at heart. He loved country sports such as hunting and racing plus his interests were in the countryside too – farming and the animals of the Sandringham estate.

After the day’s sport,the guests would assemble for afternoon tea. The ladies would change into tea-gowns – probably the third or fourth costume change of the day – and then into elaborate evening dresses for dinner. The men would dress equally formally in full evening dress with medals,if appropriate.

Guests would assemble and wait for the Prince and Princess of Wales to appear before they entered the dining room. As they waited, servants would explain the seating arrangements to them- the prince disliked the waiting around that often took place at formal dinners whilst guests were being seated. The prince and princess would walk down the staircase to greet their guests and lead them in to the dining room.

There they would feast on the richest foods available which the prince loved. There would be a hot and a cold soup, followed by fish- trout, whitebait or salmon. Diners then were served a variety of meats and game,often stuffed lavishly. Quail would be stuffed with truffles or pheasants with paté for example, all served with rich, creamy sauces.

An assortment of gateaux,pastries and ices would follow. And throughout the meal, guests would enjoy sherry, various wines, champagne, madeira and port. The finale of the meal was the fine brandy.

Sandringham Days: The Domestic Life of the Royal Family in Norfolk, 1862-1952

If any guest should be pecking during the evening of dancing, conversation and gossip, there was a constant availability of sandwiches and lobster or chicken salads.

When the ladies retired to bed, the menfolk would play cards or billiards – the prince popularised the game of bridge. In the billiard room there were screens that were decorated with likenesses of famous and distinguished men of the day.

Only the eagle eyed would notice that these dignitaries were pictured in compromising positions with attractive, naked women.