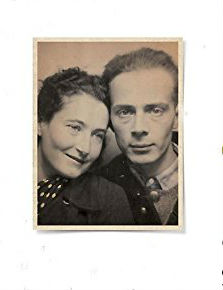 Miranda is American. Growing up, she was devoted to her grandmother Anna, a woman full of character and spirit. As Miranda grew up, she discovered that her grandmother was a European Jew who had survived the Holocaust.

Anna lived alone but when Miranda was five, she discovered that she also had a grandfather, Armand. She couldn’t remember him, although a photograph existed of her as a tiny child alongside her grandfather. But he rarely came to America and lived in Europe.

Anna would never talk about Armand. The pair had separated in 1953 and hadn’t seen each other or spoken since.

The couple had met in 1938 and had married in 1944. They spent the war as refugees and were rarely together – but after the war, in 1948, the bought a house in the South of France. But three years later, Anna walked out on Armand, taking her two children and typewriter.  She began a new life.

She found out that Anna had been a physician and that Armand was a linguist – and that he had been an interpreter at the Nuremberg Trials in the immediate aftermath of the war. Slowly, she unearthed information – old files, letters, jottings and photographs – that allowed her to recreate the strange and horrific world her grandparents had lived in during the Nazi regime.

This helped Miranda clarify her own life and it determined her future. That makes this book into not only a fascinating one but one that it uplifting and positive too. It can also be very funny in places.

At one time, when they were in Miranda’s home town, her grandmother told her they had both been invited to a topless bar. Miranda expressed her astonishment. Her grandmother said “It’s the fashion these days. God knows what they’ll serve, but I figure I can brush up on my anatomy”.

She then said that the places was called the “Zambra or something”. Miranda dissolved into giggles: “Grandmother,the Zambra is a tapas bar”.