A song for Sunrise – The Cherokee Morning Song

Home » All entertainment » A song for Sunrise – The Cherokee Morning Song 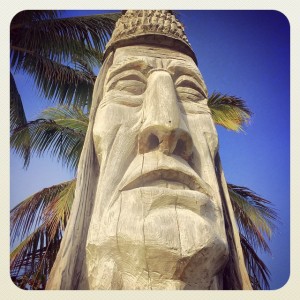 Over looking our Fort Lauderdale beach, his eyes trained on the morning sun, is a single tree totem, the Whispering Giant. He was carved out of a single cyress log by Hungarian-born scuptor Peter Wolf Toth. His aim is always to create a composite of all the physical characteristics of the local tribe or tribes, as well as their stories and histories. There are 74 documented giants around North America, one in each state of the union.

As the sun reaches the eyes of Toth’s haunting Whispering Giant the music that comes to mind is by former member of The Band, Robbie Robertson, and his wonderfully subtle work Music for The Native Americans. The music was originally written for a TBS TV documentary, but the pieces of music therein have taken on their own path.

One of the pieces is called The Cherokee Morning Song, and is becoming well known across the Native American community as a song with deep meaning and significance.

The three powerful singers in this video are sisters Rita Coolidge and Priscilla Coolidge, with Priscilla’s daughter Laura Satterfield, and were the original vocalists on the Music for The Native Americans. The trio would tour and record in their own right under the name Walela – a project that’s really helping the drive to educate and revive native traditions. The women are all of Cherokee ancestry, and the music’s creator, Robbie Robertson is Iroquois in his mother’s side. Weleda is Cherokee for Humming bird. 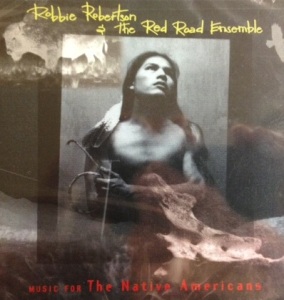 Music for the Native Americans

Music for The Native Americans, a 1994 album by Robbie Robertson and the Red Road Ensemble. Buy It!

Here in Broward County, Florida, the Seminole nation – known as the unconquered, as they never signed a peace treaty with the United States – have traditionally lived in remote camps in the everglades areas of South Florida – and after the Seminole Wars times were especially difficult. Fort Lauderdale grew up so quickly along the coast, yet there is little along our shore that pays homage and honor to the Seminoles who are our city’s First People, who lived and worked the waters around here long before we drained the swamps and build the roads. To those of us who are mindful of our city’s history the Whispering Giant totem is both a reminder and a comforting presence. We need more like him.

In the early morning, before the beach becomes a playground, there’s a peace and tranquility to be had. Although the Cherokee lived further north, around Georgia, Tennessee, North Carolina and South Carolina, there’s a natural kinship to be had in this song. The Seminole tribe are a strong and proud community and are at last beginning to assert their cultural presence here in South Florida.

The lyrics of The Cherokee Morning Song are simple.