Home » All society » Al Capone: The Man Who Created Scarface

How did Al Capone get his ‘Scarface’ nickname? 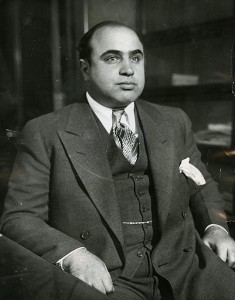 Al Capone hated that nickname. And of course it developed because he had knife scars on his cheek but who did this and how did it happen?

In fact, he was only eighteen when he received the injury that he would hate for the rest of his life. It was August 1917 and Capone was working at the Harvard Inn on Coney Island.  The place was owned by Frankie Yale, a minor mobster. Capone was employed as a bouncer and sometime barman.

He arrived for work one hot evening before the bar (and its upstairs brothel) was open. He saw that there was a group of people on the premises already – drinking and eating.  This irritated Al. He considered himself to be the manager of the place and it bothered him that this group had special treatment but his irritation was gone when he noticed that one of the group was an attractive young lady.

Al was no great chat-up guy. He tried to make small talk with the girl but was totally ignored. This didn’t deter him. He noticed that she was with a man but as he was small and rather drunk, this didn’t bother Capone.  But one of the bartenders put him straight. The small man’s date was another girl. His name was Frank Galluccio but at five feet two, Capone saw him as no threat, even when he discovered that the girl he wanted to attract was Frank’s sister, Lena.

As the bar began to open, the band started to play, Frank and his girlfriend took to the dance floor and again, Capone tried his not-too-brilliant chat up lines on Lena. She was polite but basically told him to get lost. Capone trued another angle. He asked the band, the HyLites, to play a particular romantic tune and he stood there, mouthing the words to the girl.(Yes, big,tough Capone).

Galluccio had had enough of this overgrown wise guy who was making a play for his sister. He told Lena and his girlfriend to pretend to go to the ladies’ room but actually to leave the building and wait for him in front of the nearby Coney Island fun house. Lena urged her brother to forget it but Galluccio ignored her. As the girls were leaving, Galluccio heard Capone say to Lena ‘I’ll tell you one thing,you do have a lovely ass’. (Feared gangster he may have become later, but his chat up lines left a lot to be desired).

Still unconcerned about Galluccio and believing that the girls were just going to powder their noses, Capone had drinks sent to their table – on the house. Galluccio refused them. He looked over at Capone, standing on the edge of the dance floor “come over here” he said. As Capone manoeuvred his bulk over to the table, Galluccio held his pocket knife under the table, his other hand ready on the back of his chair. As Capone approached, Galluccio moved swiftly, throwing the chair at him. Capone lost his balance as the chair hit him and fell to the floor.

Galluccio was a small man but he was wiry and agile. He leapt onto Capone’s back and slashed at his neck with his knife. He was going for the jugular but slashed Capone’s face. He ran off as bar staff rushed over with towels to compress the wounds and arrange for the victim to be taken to Coney Island Hospital.

In the few days that followed. Galluccio realised that some of his friends were avoiding him. Then he heard that word was going round that his days were numbered. Galluccio considered fleeing but the situation was getting out of control. An unofficial ‘court case’ was set up at the Harvard Inn. This was the way it worked in the underworld.

Capone’s boss, Yale, was acting as his consigliore. Galluccio was represented by Charlie (Lucky) Luciano. Yale opened the proceedings and addressed Capone and Gallucio.

“Neither of you are to leave your seat or show disrespect to each other in any way. Speak only when spoken to by me or my good friend Lucky Luciano. Answer truthfully and to the point.”

He then walked over to Capone and moved his head so that Galluccio could see the damage he had inflicted. Galluccio squirmed visibly. The mock-trial began with Yale stating Capone’s case and Luciano performing the same task for Galluccio.  Just as in a real courtroom, the pair were allowed to make their statements and to be questioned. But there was no jury – just several men with guns waiting outside the door to make sure there was no trouble. Instead of  jury, Yale and Luciano conferred and came to the conclusion that both Capone and Calluccio were guilty. They ordered Capone to apologise to his attacker. As for Galluccio, he was ordered to pay $1500 compensation for scarring Capone for life.

Yale then summed up:

“I want to see both of you shake hands and consider this dispute over for ever. Both of you agree to abide by the decision made here today. And both of you understand that if either one of you breaks this contract, both me and Charlie promise you will go to the cemetery.”

In later years, Capone employed Galluccio as his bodyguard.