Alberto Ascari was born in Italy in 1918. By the time he started motor racing as a young man, it was one of the most dangerous occupations in Europe. He knew this because his own father – also a racing driver – had been killed when Alberto was only seven years old.

By the mid nineteen fifties, Alberto had twice won the Formula One World Championship and was looking forward to continuing his career. But drivers in those days knew that in the average year of racing only about half of them would still be alive at the end of the season.

Alberto knew this. In fact, he deliberately distanced himself from his own two children saying ‘I don’t want them to get too fond of me. One day I might not come back and they will suffer less if I keep them a bit at arm’s length’. In winning two championships, he had become a national hero in his home country of Italy. 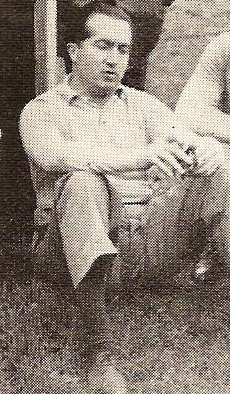 The evening before this famous race Alberto Ascari, along with fellow legend Fangio and a few other drivers, went to watch a film. Afterwards, they walked part of the circuit they would be racing on the following day. When they came to the turn just before the harbour straight, one of the drivers remarked “whoever falters here goes into the water’.

During the race the following day, Ascari did just that. A wheel clipped a curb and barreled down into the waters of Monte Carlo Harbour. Rescue divers were in place and they immediately set about rescue operations. After about twenty seconds underwater, Ascari rose to the surface unhurt apart from some facial lacerations.

But he insisted that one of the divers go underwater to retrieve his pale blue racing helmet – it was his good luck charm. (All racing drivers seem to be incredibly superstitious when they are racing – even if they aren’t in day-to-day life). He never raced without his lucky helmet.

Because he had suffered no serious injuries on Monaco he was to be found at the Monza circuit four days later. He didn’t go there to race – he went to see his friend Eugenio Castellotti who was testing a new Ferrari. The two men planned to co-drive the car in a forthcoming endurance race.

Castellotti took a break from driving the Ferrari around what was then a gruelling circuit with high banked corners. Ascari planned to go home to have lunch with his wife.  But as he said ‘you have to get back in the saddle when you’ve had an accident’ referring to Monte Carlo ‘ otherwise doubt sets in’. So he decided to drive just a few laps.

His lucky blue helmet was still being repaired so he borrowed Castellotti’s white one. Off he drove, wearing the borrowed helmet and ordinary street clothes. Castellotti listened to the roar of the engine as Alberto completed one lap …. two …. then on the third lap the engine fell silent.

Castellotti rushed over to the place where the car should have been on the circuit and found that the Ferrari was upside down in a patch of bushes. Alberto had been thrown out of the car but he did not survive his injuries. The cause of the crash was never properly determined.

Two days later his coffin was paraded through the streets of Milan – his lucky blue helmet resting on the top.

An interesting footnote — only two Formula One drivers (to date) have crashed into the harbour at Monte Carlo. Ascari of course, and an Australian racing driver called Paul Hawkins. This was during the 1965 race — ten years after Ascari’s accident.

Just like Alberto, Paul Hawkins escaped unhurt from the mishap.

Four years later he was racing at Oulton Park in Cheshire. He was killed when his car crashed at Island Bend — also a fast left hand corner.

The date was May 26th — the fourteenth anniversary of the death of Alberto Ascari.