We learn and grow, we make heroes of our own. For me, being a child of the 60s there were astronauts and civil rights leaders, soccer stars and Olympic champs. Gran loved her music, so Nat King Cole, Paul Robeson and Ray Charles were high on my list. Dad’s a big sports fan, and Cassius Clay impressed as much by his trash talking as his skills in the ring.

The undisputed Heavyweight Champion of the World. If someone wanted to shut Clay up they had to beat him in the boxing ring. And between 1964 and 1980 very few people did. To me when he yelled “I am the greatest!” he was just stating a simple fact. As a seven years old even I knew that.

The undisputed nature of his championship in those days of civil rights marches and injustice in the American south made him a big deal – a black man who by his very presence made a mockery of notions of white superiority, which to my five year old self back in northern England, made no sense at all. 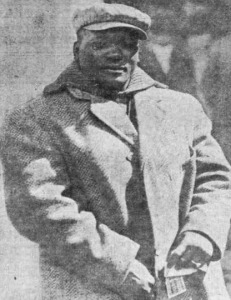 The man who more than anyone put this to the test lived in a much harsher era. He was another world champion boxer, Jack Johnson, a descendent of emancipated slaves. To quote Fightland.com’s Jack Slack, “Jack Johnson couldn’t give a damn for the perception of the black community, he knew exactly what he was, how much he was worth, and how he could prove it.  Johnson—The Galveston Giant—built his own American dream with his wits and with his fists.”

Johnson, at the turn of the 20th century was a backroom brawler who fought all comers for cash. It didn’t take long for him to meet a self-styled black heavyweight champion of the world and put him on the canvas. The problem for Johnson was that in those days none of the real heavyweight champions would fight a black opponent. There had been a precedent to this situation at the highest level when John L. Sullivan retired rather than fight a genuine black contender. 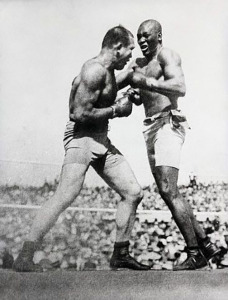 Many of the following champions had all fought black opponents prior to becoming contenders for the title, but  in 1903 the leading heavyweight Jim Jeffries had all sorts of ways to avoid the inevitable clash with the rising force in the sport, Jack Johnson. Then as now, true sporting fans didn’t let color get in the way of their support of a great competitor, though, so the pressure on Jeffries to meet Johnson was growing.  Johnson had fought for and won a legitimate world boxing title in Australia, so the meeting back in the United States seemed inevitable.

These were strange days. Why there was so much fuss about the idea of a black world champion at heavyweight level when there were black champions at lightweight and bantamweight? The answer was partly down to the fact that the heaviweight crown was the absolute. The absolute best fighter in the world.

To some white eyes, Johnson wasn’t the kind of man they wanted to see take on the world title recently vacated by Jim Jeffries. He was his own man, loved fast cars and faster (white) women, dressed in fine clothes and gambled away his winnings. And he particularly seemed to love teasing, goading and finally beating his white opponents. When he took the title it really did ruffle feathers; to some, even though Johnson now had the title, Jeffries was still the real champion.

The British magazine Boxing wrote at the time “Here we are, the hitherto dominant race, compelled to recognize that an American negro, the descendant of an emancipated slave, is the principal figure, our acknowledged master at the one great physical sport in which actual physical superiority can be authoritively tested.”

What followed was a search for ‘The Great White Hope’. So many beefy white boys tried their luck at the sport, in the hope of challenging Johnson in the ring, but no-one came close, as he faced what John L. Sullivan called wash ups and patsies. In their desparation to topple Johnson Jim Jeffries was talked out of retirement to take part in what was widely billed as the fight of the century, in Reno, Nevada. It was a mismatch. The beating Jeffries took was so severe that film of the victory was banned in many cities. Even the President agreed with the ban, expecting it to provoke race antagonism.

Johnson himself recalled “The last hope of the white race had failed, since that day no other has been found to try to replace him.” 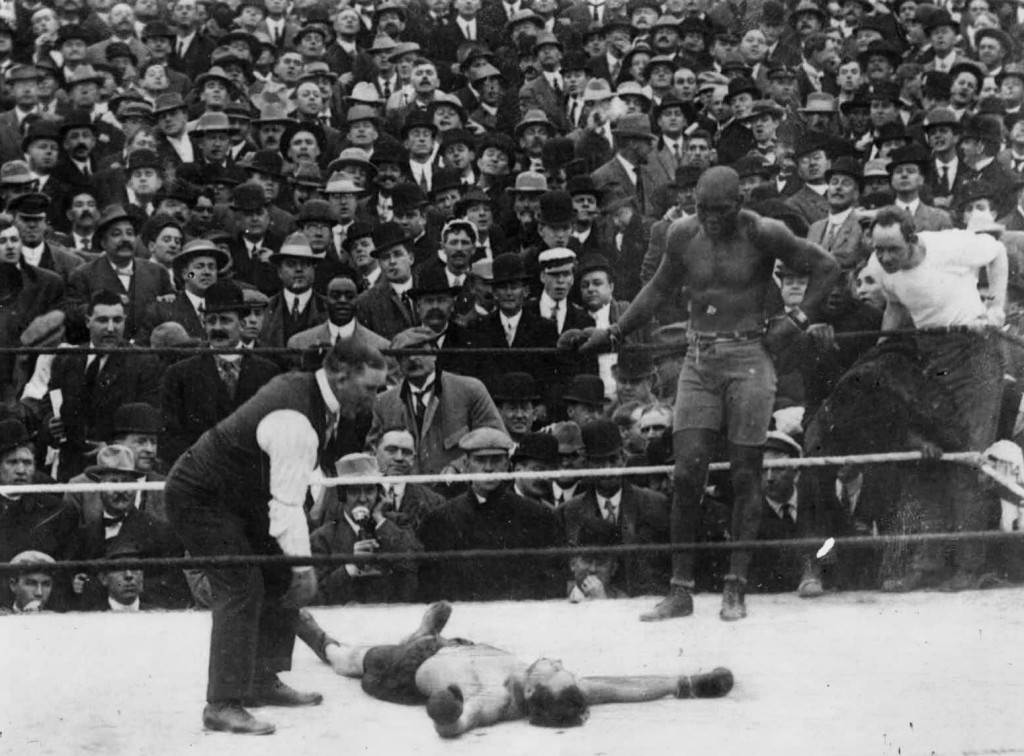 Jack Johnson knocks out Stanley Ketchel in the 12th round after being knocked down by Kerchel earlier in the round.

To me Johnson was a hero because of how he was out of the ring as much as in it. From the distance of a century he seems very much a  modern man. The newspapers portrayed him as a celebrity playboy and his life and habits were splashed across the media. What impresses it the cool way that he dealt with all the pressures and prejudice, that he thought himself above all that.  Today, as the hype surrounds the boxing face-off between longtime rivals Floyd Mayweather and Manny Pacquiao in a modern day Fight of the Century it’s easy to imagine Jack Johnson in today’s sporting arenas, facing up to Wladimir Klitschko in the MGM Grand on pay-per-view. Now I’d pay the big bucks to see that one!

Johnson’s downfall came down to his relations with women, from wealthy white divorcess to common prostitutes. He was charged under the Mann Act, an act which prohibited the transporting of women over state lines for “immoral purposes” a law that was loosely worked to allow all kinds of interpretations. Johnson was forced to live abroad, defending his title three times before losing the title during a crazy 26 round bout in Havana, Cuba. It was thirty years before the next black contender, Joe Louis, would step in to challenge for the undisputed crown.

Ultimately Jack Johnson was his own man, and a strikingly self-contained individual at odds with the times. In the days when Jim Crow still stalked the fields below the Mason-Dixon line America wasn’t at all ready for his frankness and honesty.