The making of Amelia Earhart. 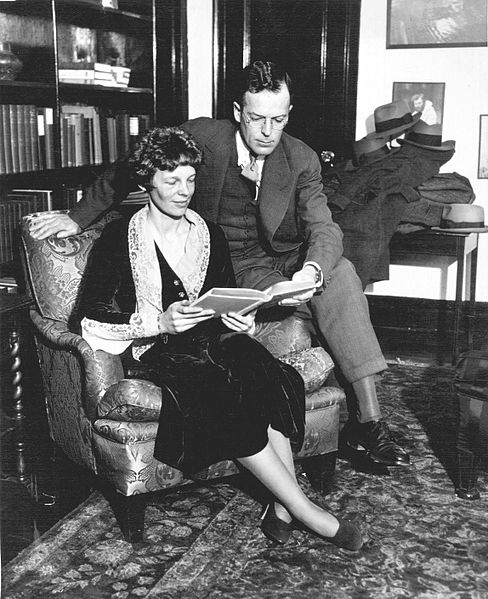 Amelia Earhart became world famous for flying planes. Lots of other women were flying at the time, but Amelia became the  female pilot.

Today, she is known for her mysterious disappearance but during her lifetime, her popularity was largely due to the skilled promotion and public relations created by her husband, George Putnam.

Amelia was always an adventurer and was a tomboy as a child. She’d started flying before she met George and as part of her independence, she had often remarked that she would never marry because she considered that most married women were little more that ‘domestic robots’.

So why did she change her mind?

George was ten years older than Amelia. He was married and had two children. Amelia was tall and gangling, gap-toothed, not the best flyer of her generation and determined not to marry.

But George was rich and clever – he was a seasoned procurer of sponsorship and had promoted and published the famous aviator Charles Lindbergh.

It’s easy to imagine that when the couple met, both saw dollar signs in abundance.

His marriage was unhappy (his wife was having a long-standing affair with a man nineteen years her junior) and as soon as he was free, he married Amelia.  Her job was to fly the planes and his was to arrange her interviews, book contracts, lecture tours, newsreel coverage, photo sessions,press releases,product endorsements and sponsorship deals. He insisted that she write articles and books – even though writing wasn’t her forte.

He made her write a book about flying solo between Newfoundland and Paris. Or at least, almost write the book. She hadn’t made the flight yet. She completed the volume, all apart from nine pages, then undertook the journey. She ended up in Ireland, rather than in France, but as soon as she returned she was set to work finalising the book – which was released a week after she had got back to America.

Part of his problem in promoting her was that she really wasn’t an exceptional flyer. She crashed a lot.  She was casual about navigation and was often lost. She never bothered to learn Morse code. Another problem was that the public demanded more feats. Once a trip had been done, George had to think about more. He decided that round the world was the ultimate flight.Wiley Post had already flown around the globe but George decided to lengthen the route and thus declare it a new record. She needed a navigator and George chose Fred Noonan. It’s said that this wasn’t because of his skills but because, well, he wasn’t terribly good so George was able to employ him for the trip at a very low rate of pay.

When they flight set off from Miami on June 1st, 1937, but George was extremely disappointed because American Wallis Simpson was due to marry the abdicated King of England (by then relegated to being the Duke of Windsor) and was therefore hogging the headlines in the US press.

Earhart and Noonan flew to New Guinea where they refuelled. When they took off,  Amelia made a hair-raising take-off that cleared the bay by only five feet and they were never seen again.

The disappearance of Amelia Earhart

They were expected at Howland Island in the Pacific Ocean. The officials there did hear her on the radio but communication was difficult because of static and because neither Amelia or her navigator understood Morse code. When last heard from, the plane had been in the air for twenty three hours – and it had had twenty three hours’ worth of fuel. It’s thought that the disappearance was due to the fact that they simply ran out of gas.

The two people and the plane disappeared without trace. Wallis Simpson was no longer on the front pages of the newspapers and Amelia’s disappearance took over as four thousand men in ten ships and sixty five planes conducted a two-week search – finding nothing.

Ever since, theories have abounded. Some said that the pair were working as spies for the government, or that she had been captured by the Japanese. Another popular theory was that she’d faked her death and was living in New Jersey under an assumed name. Some pointed out that she had always said that she wanted to die in a plane and that she never wanted to grow old.

We might find out one day but it’s likely that the hapless pair simply ran out of gas.