Home » All books » Angels Sing To Rest, by Chrinda Jones

Today’s book is reviewed as part of the Partners In Crime Virtual Book Tour for Chrinda Jones’ engrossing novel.  You can visit the author at a variety of sites during the month of November.  The complete schedule is listed below.  We hope you will drop in on a few. It is a wonderful opportunity to get to know both the author and the book.

Chrinda Jones’ newest release, Angels Sing to Rest, is a twisting tale of murder, with a sadistic killer preying on children.  It is a solid suspense that will have you looking over your shoulder as you read.

Book two in the Olivia Gates and Will Green series won’t disappoint fans. it’s a descriptive, frightening look at life for teens on the street, along with a gritty police investigation of an unconcerned killer.

Olivia Gates, a detective sergeant with the Dallas Police force is just back on the job after the suspension and IA investigation over the death of a serial killer. No sooner has she returned when she is called to a crime scene at a nearby park.

A child, only ten years old, has been found murdered.  When several more attacks show similarities in the manner of death, Olivia knows the brutal killer can not working alone.

Olivia, a single mom to a young son,  now lives with her father, a former District Attorney.  Between child, father, career and Will, she has her hands full.  The last thing she needs is an ex-husband, the father of her son, back in her life.  Yet it is there surrounding and invading her life in the middle of a dangerous investigation.

Will Green, a criminal psychologist from Britain, wants to help. Since he left the police force to teach. Olivia’s superior wants him to stay out of it. His past and the horrors that he has seen in his career weigh on him, leading him to doubt himself. Still, his relationship with Olivia feels essential to his sanity. A strong and able man, yet in need of the therapy he is receiving.

I found the angst that Will goes through personally and with Olivia, a little distracting.  But the drama and mystery is very suspenseful. When you have a killer who believes himself untouchable, it makes it harder to investigate within the lines.  The realism of the gangs that plague Dallas and similar major cities brings home the difficulty youth face when it gets close to them.  Lessons all of us should learn.

A superior who wants Olivia out.  Someone on the force who is  being blackmailed. The violent ex-husband.  The “king” of a gang that is afraid to even speak his name.  And kids, teens and younger, dead, abused, afraid, living on the streets that would swallow them up.

The novel has a good conclusion.  Yet there will clearly be more in the series.  Some unanswered questions and unsolved crimes remain.  Chances are very good that you will want to be there to see what happens next.

The first book in this series is Darkness Knows Me, published December, 2013, may be where you will want to start.

In this debut novel from Ms. Jones, a serial killer is stalking the streets of Deep Ellum, in South Dallas. 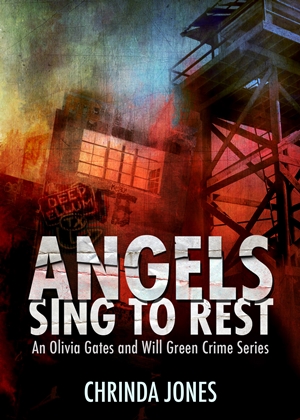 “Angels Sing to Rest” begins where “Darkness Knows Me” left off: after the investigation into the death of the Deep Ellum Killer, Levi Devereux.

Detective Sergeant Olivia Gates returns from a two-month suspension, to find her team has gained a new member, her ex-husband is being released from prison, and a 10-year-old street kid has been murdered on her patch of South Dallas.

Her ex she can deal with, even when he drags their young son into the mix or so she thinks. The murdered boy with the crushed chest, isn’t so easily handled and weighs heavily on her as more street kids are killed with an unimaginable sadistic flare and no discernible motive.

If the continuing body count wasn’t stressful enough, Olivia’s falling out with long time friend and colleague, Doctor Will Green, threatens any hope Olivia had for more than a friendship with the good doctor.

Drugs, gaming, prostitution and sadistic murders lead Gates and her team on a trek through the seamy underbelly of living rough on the streets of downtown Dallas.

Published by: Wing and a Prayer Publishing

That he killed this woman with his own hands didn’t panic him. She wasn’t his first dead prostitute and she wasn’t likely to be his last. If he thought of prostitutes as human the whole scene might have played out differently. Her kind provide a service. They make themselves available to him and others like him to use up and throw away. His father told him it was the order of things. He believed him.

Vincent rolled the woman over so he didn’t have to look at her face and untied the scarf from her neck. He threw the silk bed sheets over her naked body, not out of any sense of propriety — he purely despised the look of her, with her dyed red hair and stubble covered legs. Experience taught him that her kind was always ready — for cost, a few extra twenties and a bottle — to do what the higher priced call girls wouldn’t.

He went to his closet to cover his own nakedness with a robe and picked up the phone beside the bed. He dialed. When someone finally answered, it was his second in command. “Martin, come to the loft and drive the van. I have some garbage for you to pick up.” Vincent purposefully hung up before Martin could ask questions and went to the utility room for the thick plastic drip sheet and masking tape the remodeling company left behind.

He returned to splay the drip sheet on the floor at the foot of the bed. When he pushed the body off the mattress, it made a sickening thud as it hit the floor, reminding him of a large tuna hitting the deck of a fishing boat. He rolled her up in the plastic, securing the bundle with masking tape. Vincent walked away leaving her in the middle of the room for his lackey.

He tilted his head toward his chest and opened the dressing gown, sniffing for the odor that nauseated him. She left her sex scent on him. The strong odor made him involuntarily gag. He covered himself again and entered the bathroom to shower off what remained of her humanity.

Chrinda Jones is a crime writing and reading fiend, which she believes is genetic and began with her great-grandmother, who hoarded crime novels.

“Darkness Knows Me” is her crime novel debut and “Angels Sing to Rest” is next in her series. When she’s not putting her time in with the writing gods, you can find her playing music or enjoying a good meal with friends and family.

Chrinda currently resides in Murphy, Texas, with her husband, children, grandchildren and her Jugg, Abby.

Don’t Miss Out on the Giveaway: