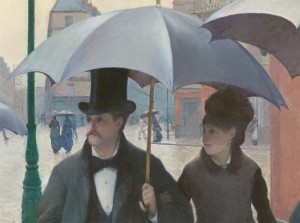 I thought I knew Gustav Caillebotte. I know that he was a rich man who was able to retire from work as a lawyer and indulge in his love of art and of impressionism while still in his 20s. Freed from having to worry about the bills, or even sell his work, Caillebotte lived in the newly developed 8th arrondissement district and painted realistic and impressionistic scenes of the fashionable Haussmann-designed boulevards.

Over a century later I find myself on a rainy afternoon in Chicago as the evening began to draw. I decided to step out of the rain blowing across Grant Park, drenching Michigan Avenue and see some art. And that’s how I walked right into Gustav again – or  more precisely his 1977 painting Paris Street: Rainy Day. One of my favourite paintings of student days right there, in all its glory.

I thought I knew Gustav Caillebotte. I was wrong.

I thought I knew his painting too. A postcard of it had been tacked to my wall since my days as a teenage art student. A sharp renaissance perspective, with a brollyed couple strolling right in the foreground. The people on that Paris street seemed so beautifully modern – their cheap department store umbrellas and laissez-faire casually choreographed stance felt like an honest representation of his gentile neighbors. Almost photo-realist and technically impressive, the glistening street brings back memories of early morning bouches de lavage and petit dejeuner at a glistening street cafe.

I’d seen and studied Paris Street, Rainy Day countless times, mainly from the glossy pages of coffee table tomes. I thought I had a measure of the piece.

That is until we met, nez à nez so to speak.

Hey, he’s a big lad, this painting. I expected him to be at best four or five feet wide, in some chintzy gold frame in some dusty old museum corner next to a Degas or a Pissarro or some such. I certainly didn’t expect to see him dominating one of the biggest gallery walls in North America. He’s taller than Michael Jordan and as wide, it seems, as Michigan Boulevard.

I didn’t expect the painting to be so, well, énorme.

It was totally disconcerting, as if I’d taken Alice’s Drink Me potion and was being mentally dragged down the rabbit hole.

I’d had a similar feeling gawping up at Gustav Courbet’s brutally realist Burial At Ornans in the Musee D’Orsay. At least with Courbet you know that he’s messing not only with your own sense of what a painting should be, but that of the academy grandees of the day. Burial to Ornans stomps its big muddy boots all over the history painting tradition and what a man to do it.

But Gustav Caillebotte was just representing the streets outside his well-to-do apartment . Why on earth should he place such a large piece of the every day right up there on the gallery wall like this? And why didn’t I expect the work to be such a big presence in real life. 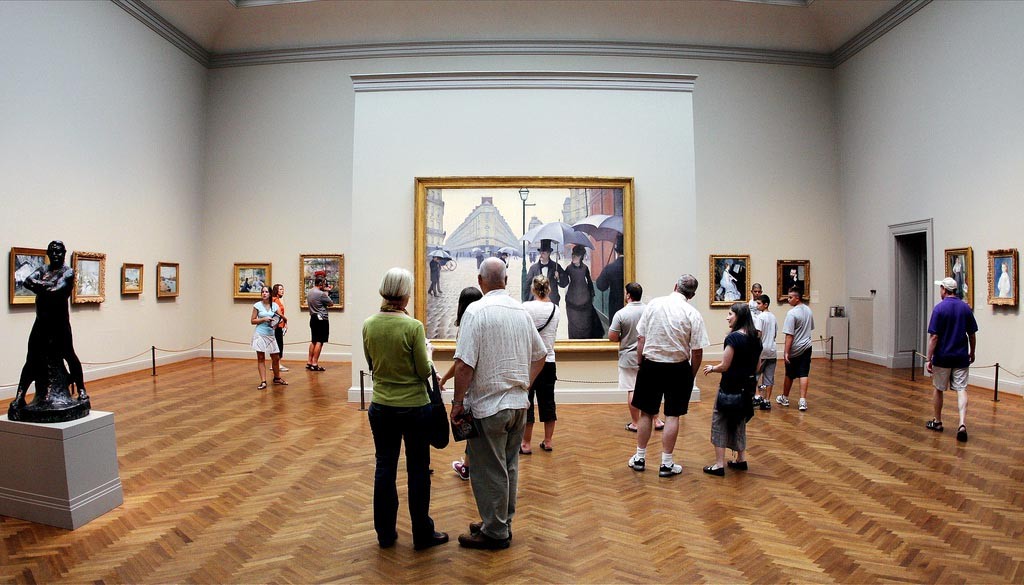 The scale of the piece really forces the scene on the viewer. It is as carefully arranged and meticulous as anything Seurat painted a generation later. The painting is modern in that it feels like a photograph – Caillebotte was careful to sharpen the focus onto the center of the image,  with the perspective elements becoming more faded and blurry to accentuate the sense of depth. From close to the effect is disconcerting – you feel a part of the scene, and the couple are about stroll on past.

That day in the Institute time was getting on and the Museum was approaching closing. I stepped back out into the fading Chicago light and walked north through similarly lighted streets, couples walking by under their black umbrellas, under the shade of the old buildings along South Michigan Ave.

Gustave Caillebotte had played a neat trick there. Unlike any of his Impressionist contemporaries his work still feels as fresh as the rain on his cobbled streets, and to be able to stop and say hello to those elegant Parisians in person,  was an unexpected pleasure. 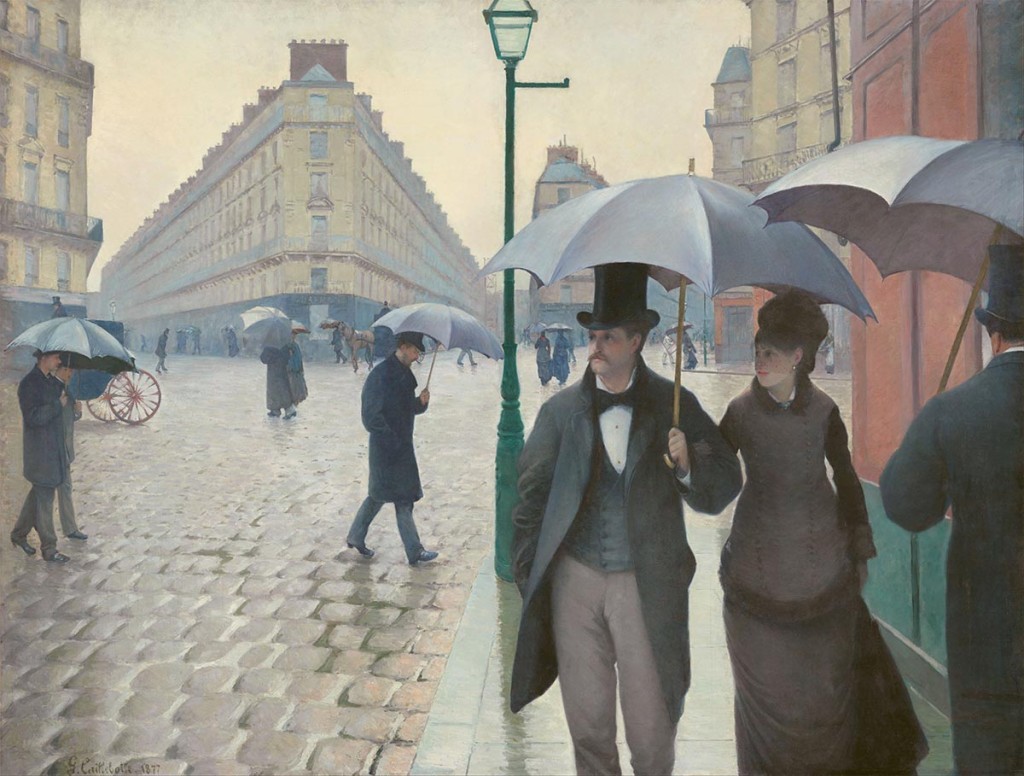