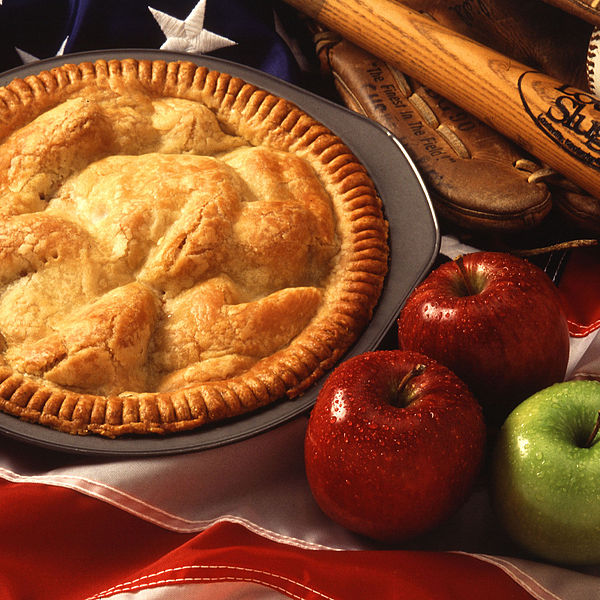 In our tiny apartment I can often hear the TV when I’m cooking and the other day, on an ad, I heard someone say “It’s as American as apple pie”.

Hang on, I thought.

Where did that come from? Apple pie isn’t American. I happen to know (oh the trivia that rattles around in my head) that the first literary reference to apple pie was in Chaucer (would that be the thirteenth century?) which was a long time before America was even thought of.

This prompted a discussion with a few friends – American and English – about what is American cuisine? Which dishes were truly invented in America by Americans?

Someone suggested hotdogs and hamburgers until I pointed out that hot dog sausages are called frankfurters after the city of Frankfurt in Germany … oh, and that’s where Hamburg is too.

So all we could come up with were green bean casserole (which I’ve never been tempted to try) and Coca Cola (which I drink by the gallon).

But the ever-informative Wikipedia but the apple pie question into perspective as follows:

There are claims that the Apple Marketing Board of New York State used such slogans as “An apple a day keeps the doctor away” and “as American as apple pie!”, and thus “was able to successfully ‘rehabilitate’ the apple as a popular comestible” in the early twentieth century when prohibition outlawed the production of cider.

But here’s more about American cuisine: