Auschwitz: The Monster Within

Home » All society » Auschwitz: The Monster Within

Auschwitz: The Monster Within.

And so, I’ve arrived.

Polish bus PK97 gallops off into the distance. The old girl has delivered me to the location on my ticket – a place I’ve wanted to visit for quite a while. Like most people, I’ve got a wishlist: Elvis’ Graceland, The White House, The Grand Canyon, The Pyramids and possibly the Paris tunnel where Diana was killed. Half expectedly, a slow churning in the pit of my stomach has begun, a reminder… this isn’t like any of those places.

Near to the entrance, there are people everywhere. Almost every one of them brandishing a camera of some sort. It’s not quite 10 AM and it’s a Wednesday, not even a public holiday, but there are empty coaches in the car park and full ones continue to arrive; it seems a lot of folks want to come here! The dominant language around me I recognise to be Polish, but I hear other languages too, including Yiddish, American and my own… the Queen’s English.

This could be the entrance to any popular amusement park. There are ticket issuers and ticket checkers, and there’s security. You cannot enter with a bag that is larger than the rules state and you cannot take photographs in certain areas. But this is no amusement park; the attractions here are very different! There is no entrance fee. And you can stay as long as you like.

Waiting for my turn to have my ticket checked (I’d printed it off the website before I left England) I look about the busy area that I am in. Why have all these people, and so many students, decided to come here on the same day that I have? No, I shouldn’t think like this, especially considering where I am. And as if on cue, from behind me a student, or teenager anyway, shouting words in broken English that penetrate my ear:

“Look everyone. The gates to Hell”.

My intention was to avoid absorbing the menace of the infamous gates until my ticket had been checked, but thanks to that teenager… I eye them. My eyes quickly race over the old, brutal iron that is them. The flaking black and white paint that coats them. The rusty bolts that hold them together. And my eyes climb until they glimpse the words cut into the iron that runs above and across them. The sun’s rays this beautiful May morning cause me to squint at the message. It’s written in German. I cannot read German, but I know what the words say. Everybody knows what they say!

An attractive Polish woman in her 20’s beckons me forward. Her and her colleagues welcome around 1, 400, 000 visitors every year here. Just four months ago, it may well have been her that greeted Steven Spielberg as he and his wife passed through this entrance. With a warm smile she inspects my ticket and is satisfied. No broken English for her; she has learnt my language well. 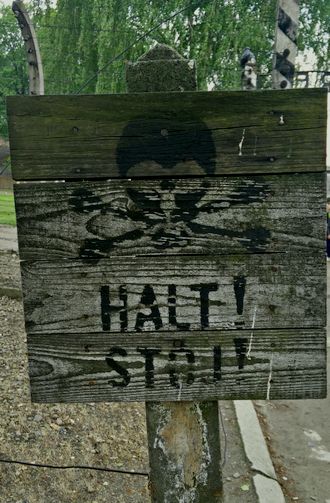 Enjoy my visit – not likely. But I had to come.

It seems to me, that as you stand before the gates of Auschwitz, you’re faced with a choice… you can either try and keep control of your imagination, or you can let Auschwitz control it for you.

Which it will be depends on your attitude towards your visit – have you come here to see, or to feel. Some people come to Auschwitz to see. They dash around taking pictures of this, video clips of that, and then they leave.

They’ve been to Auschwitz, and they’ve the photos to prove it.

Others choose to feel everything the largest mass murder site in human history has to share with them. And it all starts with the gates.

These gates. The gates I now stand before. No officialdom left to keep me from them. The only way into this vast place (the size of thirty English football fields) is through them. I take up a stance a metre away and I glare at them. Not surprisingly, they glare back at me. A little more than a minute passes before the pair of brutes smash an iron fist into my mind and take ownership of it. Like daydreaming, I suppose… eyes wide open and unblinking, conscious but mind somewhere else. I can neither see the daylight nor hear all the people around. My thoughts, my imagination… wrenched from the now and dumped into the past, seventy years into the past.

Flashbacks, to a time when I wasn’t even present in this world. But I see. The gates… not the relics they are today – background props for endless selfies, but existing for a different purpose seventy years ago, and serving a very different master! Back then, they were alive with activity. Ferocious German Shepherds forever beside them, mouths frothing with rage, tearing at their constraints, hell-bent on sinking their jaws into their human enemies. Swathes of officers wearing the Death’s Head on their uniforms, always present too. And rifles, leant up against the gates. Cigarettes stubbed out on the gates. Conversations held around the gates, about the war, about the Fuhrer, about the Jews, about loved ones back in Germany. And trucks… endless streams of trucks passing through the gates, day in and day out, overflowing with frightened and confused people, the officers screaming at them in German, and beating them, the dogs ripping into them. And…

“YES”, I fire back at him, as I’m startled back into the now. And then calmly add, “I know that”.

“So you from Australia?”

“No. I’m English. Excuse me, I’m going to head into the camp now. Maybe we’ll run into each other a bit later and stop for tea or something”.

The words above the gates were a lie, of course. More than one million innocent souls, mostly Jews, but also Poles, Ukrainians, Russians, gypsies, homosexuals, the elderly, the infirm, women and children – all arrived here against their will via a network of trains from across Europe, and they never left. They saw the same message above the gates; it was intended for them. ‘Work makes you free’. But there would be no freedom for them once they got here, except death, and that was part of the plan. It had even been given a name by those that had conceived it and those that ensured its implementation. It was the ‘Final Solution’.

And now it is time for me to enter this human killing factory. Unlike those imprisoned here during the second world war, I’m free to wander where I like, unescorted, and I can leave whenever I wish. So far, no birdsong, and I have been told not to expect any – the wildlife can sense death, even after all this time, so it stays well away. The ashes of over a million people are still here, and they are said to be everywhere… in the soil – a mound here, a grey patch there – in the lakes. When Steven Spielberg knelt down and put his hand in one of the lakes, he pulled it out only to find it covered in human bone meal!

A tidal wave of emotion hits me full on. I feel guilty for everything. For complaining earlier about the coffee back at my hotel. For my choice of clothes today. For being alive and for being healthy. I feel guilty for everything that I have. But I had to come. Perhaps everybody should come! Perhaps it should be made a legal requirement that everybody who wants to be a President, and a Prime-Minister and a leader of a country – any country – has to first come here before taking office.

I do a 360 degree in the courtyard and wonder where to start. A sightseeing tour of human cruelty towards other humans on the largest scale there has ever been. Where do you start? I know I’ll see it all. I have come to see it all: the crude, wooden and cement bunkers where thousands of people collapsed every night for a few hours sleep after a day’s hard labour and with little food in their stomachs to sustain them, the tons of human hair, the mounds and mounds of personal belongings, including clothes, spectacles, dentures, and children’s dolls and teddy bears, the execution wall, where people were marched to nude, for breaking rules such as trying to escape or being defiant, then shot in the head, the gas chambers, where more than one million people took their last breath, screaming, crying, panicking, scratching at the walls as they realised they were being murdered, and not simply being deloused, as they had been told, and the crematoriums that incinerated their bodies immediately afterwards. Where to start?

Rudolf Höss was the commandant of Auschwitz. In March 1947 he was found guilty of mass murder and sentenced to death by hanging. On April 16th he was driven from Krakow to Auschwitz and hanged on gallows that had been erected especially for his execution. Here are the gallows and the spot where he was hanged: 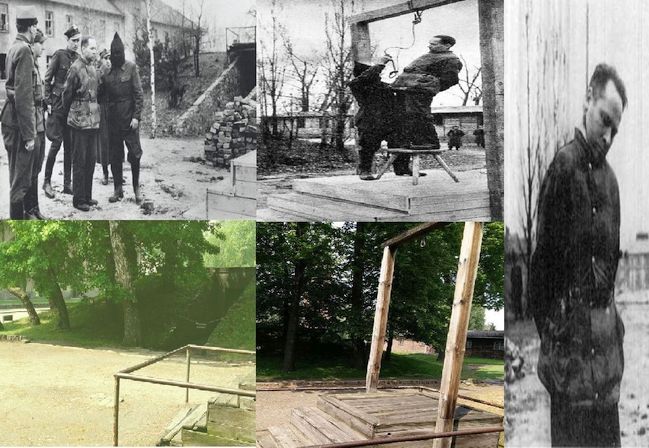 I will end any further commentary now. Instead, I leave you with a few of the photographs I have taken, they will surely say more than I ever can (black & white photos sourced and used to help give clarity).

But I doubt it! 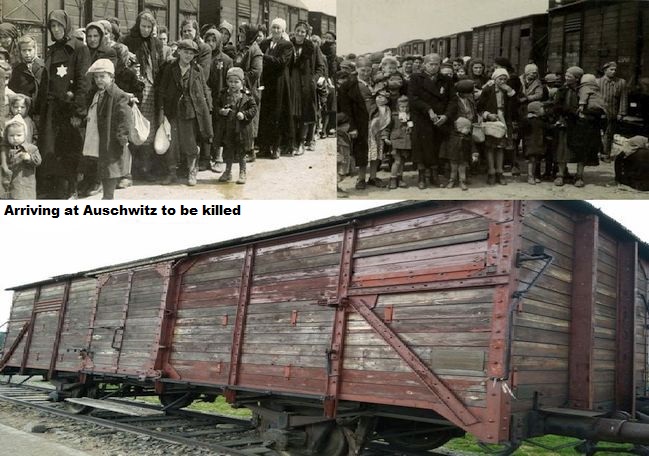 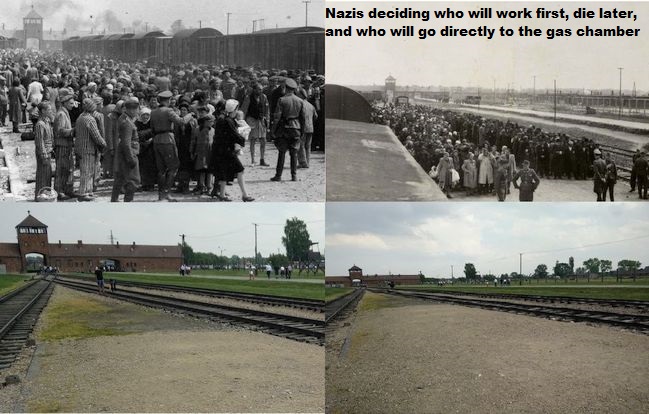