Below Stairs by Margaret Powell

Home » All books » Below Stairs by Margaret Powell

The memoirs of a kitchen maid. 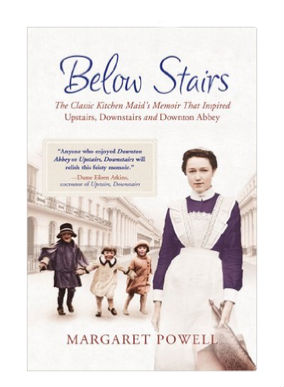 Margaret Langley was born in an age that was so different to today. She came from a family of seven children and when she was thirteen left school to go to work. She had to – to help the family finances.

This book tells about her early years and in particular, her life when she entered domestic service as a kitchen maid. She worked in a laundry until she was fifteen but then began work as the most lowly of the low household servants, as the general dogsbody of the imperious cook.

Margaret has a wonderfully down to earth attitude as she describes her life in those days. There are some very funny stories, and also some which will make you shudder at the hard work that was required in those days – plus the inequality between ‘us’ and ‘them’.

For example,one of Margaret’s co-workers was fired from her job as a housemaid because she was pregnant. And yet the father was her rich employer’s nephew. From Margaret’s point of view there was one rule for the rich and certainly a very different one for their servants.

Life as a kitchen maid wasn’t easy. Margaret describes how she worked from the early morning until late at night being bossed about by the sour Mrs Bowehard, the second cook she worked for. Gradually her positions improved and it’s a joy to read her descriptions of her employers such as the Italian Mrs Bishop who was sixty years old, acted half her age and had an entourage of gigolos. It was when she was working for Mrs Bishop that Margaret accidentally shot a portion of new potatoes in hot butter down the cleavage of a female guest at a posh dinner party.

But Margaret’s ambition, like all maids of the day, we to marry and escape from the life of domestic service. (This despite the fact that Mr Bishop had a fondness – probably better described as a fetish – for seeing the maids wearing hair curlers). As she searched for a man to rescue her she describes her efforts and opinions in a wonderfully fresh and funny manner.

She and her fellow-maids would go to tea dances and to the cinema, always with the goal of getting a bloke. Cinemas were trickiest though, when young men would come and sit next to them. As she says:

“You couldn’t see what he was like in the dark. When anyone nudged me he usually turned out to have a face like Frankenstein’s monster and the morals of the farmyard.”