Home » All society » Who Was Bernarr MacFadden? 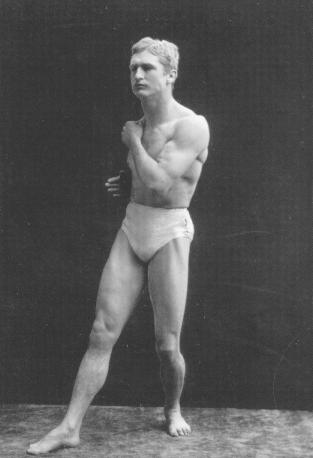 He fully expected to live to be a hundred and twenty. He often predicted that he would in his health magazine and his over one hundred books.

He was a bodybuilder and chose to subsist, so he maintained,on a diet of nuts, carrots and beet juice.

He also recommended exercise, relaxation and that sex should be performed only for the purposes of reproduction. (He was married four times and had eight children). His favourite exercise was to stand on his head. He claimed it was good for the digestion and the spine plus, because of gravity presumably, made the hair grow.

After a childhood of being rather weedy, he began to exercise and take care of his body- in his own curious way. In 1899 he founded Physical Culture magazine and this was the start of his publishing empire.

He founded health clubs and boarding schools too – he was determined to spread the  word about his beliefs. As time went by he revised his intention to live to be one hundred and twenty – he decided that a hundred and fifty would be nearer the mark.

One regime he highly advocated was that of fasting. Going without food for a week or so worked wonders, he claimed. He believed that grapes and grape juice cured cancer.

Little is known about his first two wives but he found his third – she was the mother of his eight children – in England. She had won a contest which was created to discover ‘Great Britain’s Most Perfect Woman’. Despite being the perfect woman and providing him with eight children (presumably all done on a diet of nuts and carrots) he divorced her because ‘she did not follow my instructions as to her own body. I wanted her to be an example of my work and a credit to me’.

She had neglected her wifely duties,evidently, because she did not want to take part in his daybreak exercises followed by a ten mile run. Imagine – the poor woman had no intimate marital life apart from when Bernarr decided it was time for another child, she had given birth to eight children ( he insisted that no medical persons should be present at their births), she lived on carrots and nuts and she was still expected to get up at dawn for vigorous exercises and a ten mile run. What’s amazing is that she hadn’t divorced him years before. but of course…

He was hugely rich

He encouraged his readers and followers to bury their money in the ground as banks weren’t to be trusted. There are numerous accounts of him heading out into the countryside with  large bag and a shovel – and returning with only the shovel. After he’d died, in 1955, his wife (his fourth who managed to avoid having children) claimed that there were many metal boxes buried by him containing money. Many people scoffed.

Although five years after his death, a buried treasure trove was found on Long Island,onland MacFadden once owned, containing cash to the value of $89,000.

Well, he didn’t make it to a hundred and fifty – not even to a hundred and twenty. But he did live to the old – but not remarkable – age of eighty seven. He might have lasted longer if he’d taken his doctor’s advice. His doctor urged him to eat but Bernarr deciding fasting would cure him.

He slipped into a coma and to the astonishment of his avid disciples, died shortly afterwards.