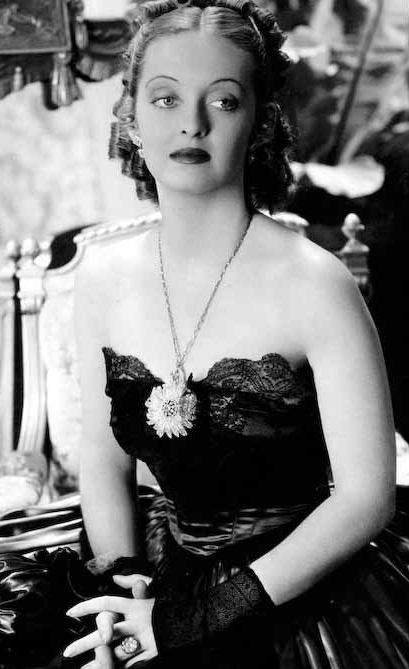 Bette Davis, who was born in 1908, was one of the most stunning and unusual actresses from the Golden Age of Hollywood.

Whereas most actresses of that era made it to success because of  their beauty, Bette Davis succeeded by sheer force of personality.

Most actresses at the time wanted to be portrayed as beautiful and stylish women – Bette didn’t care about that. She took the parts of slovenly women, bitchy women, unpleasant ones – because she wanted to demonstrate her acting ability, not her looks.

She was happy to play older women – she portrayed  a sixty year old Elizabeth I when she was twenty nine. She played the parts of dowdy women and was padded to appear to be overweight.

Yet she was decidedly glamorous and sophisticated as some of her other roles show only two well.

Throughout their careers, these two women were rivals. Yet their lives were strangely similar.

Both married four times and both adopted children. Joan Crawford’s daughter famously  wrote an exposé bestselling book about her mother (in 1978) and Bette’s daughter did the same about her own mother (in 1985).

These daughters’ allegations were very similar and spoke of child abuse, failed marriages and overindulgence in the booze.

When Bette died, she left no provisions for her daughter or her grandsons because of the book. Her other daughter (adopted) had been put into an institution when she was three years old. This was more than likely due to problems caused during her birth.

Her other adopted child, a son, was provided for in her will. Just as happened with the Crawford siblings, he did not agree with what his sister had written about their mother.

Whatever Happened to Baby Jane?

Despite their rivalry, Davis and Crawford starred together in the incredibly creepy 1962 film, Whatever Happened to Baby Jane? In the movie, they portrayed what they were – two aging actresses. Chillingly. Blanche (Joan Crawford) was bedridden and at the mercy of her sister Jane (Betty Davis) who had been a child star and was looking to revive her career. You can see a video clip below.

Some commentators say that the success (and spookiness) of the film is due to the real animosity between the two actresses.

Again, Bette Davis plays an unattractive woman older than her real years. She was only just in her fifties when the film was made. Joan Crawford’s year of birth have never been conclusively proved but it’s likely that she was slightly older than Bette Davis by anything from one to five years older.

But the pair successfully play two elderly – and very chilling – women in this delightfully creepy film.

In the reprint of the novel on which the film was based, it is said that Bette Davis was first given her part in the film and that it was she who suggested her rival Joan Crawford to play opposite her.

“The best time I ever had with Joan Crawford was when I pushed her down the stairs in Whatever Happened to Baby Jane?”