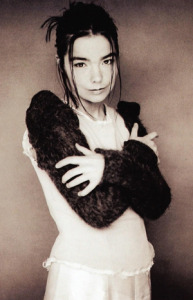 Bjork – as photgraphed on the inner sleeve of the album Homogenic.

I was one of the first to turn on to Bjork’s extraordinary solo talent. And I mean this literally – I was listening to her first album ‘Debut’ several months before its official release.

Working on the fringes of the British music scene it was not unusual to find oneself holding pre-press or advanced copies of albums before public release. I’d written a good few music reviews for listings magazines and fanzines so this was all part of the business of releasing material.

But in this case I confess I didn’t have an advance copy through legitimate means. I happened to be in a record execs office and somehow this advance cassette  found its way into a tape-to-tape. I accidentally-on-purpose pressed the record button. Nobody noticed.

This is how I became acquainted with Bjork’s brilliant solo album (which is actually her second, if you include her Icelandic language Gling-Gló and her third if you count Life’s Too Good – made with her crazy band Sugarcubes five years earlier but I digress).

So did I capitalize? Did I rustle off a batch of bootleg copies and flog them down Camden Market? Not my style. I may have knocked off a tape for a mate or two, but that was enough.

Twenty years on and someone else clearly managed to get hold of an advance copy of a new Bjork album, Vulnicura. Only this recording didn’t stay on a tape deck, it was leaked to the world, and in the internet echo chamber it was soon out there being shared left right and center.

This was potentially a tragedy, as the release of Vulnicura was meant to coincide with a major exhibition/retrospective at New York City’s Museum of Modern Art later in the year. But the cat was out of the bag, and a few days ago an official digital release was made of this, her 8th album, Vulnicura.

My copy? Bought and paid for, if you please.

Vulnicura is, by the way, extraordinary. It’s immediately familiar because it is a return to a style associated with her earlier work, particularly the Homogenic album, with it’s intoxicating blend of classical strings and electronic beats. On Homogenic was a beautiful,powerful opening suite, Joga, where she sang of emotional landscapes.

Bjork has always sounded confessional, and on Vulnicura the power of this emotional delivery is accentuated here by lyrics centered upon the breakup of a loving relationship. Always an exceptional collaborator she’s working with producer Arca, most recently known for his work with Kanye West, and young hip hop auteur Alejandro Ghersi. The result is a complex and powerful album that I believe is her finest yet.

Harsh electronica, smooth strings and intimate confessional themes have been done well before – most recently on Shaking The Habitual, by Swedish duo The Knife, but Bjork’s emotional landscapes are on another, astral plain.