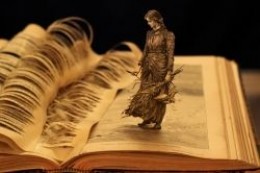 Every day thousands of old books are sent for recycling. Nothing wrong with that, you might say, and I would agree.

But there is another use for discarded books: as book sculptures.

The image in this introduction is by book sculptor, Justin Rowe (used with his permission). Other photographs in this article have been taken by me from books in my collection. 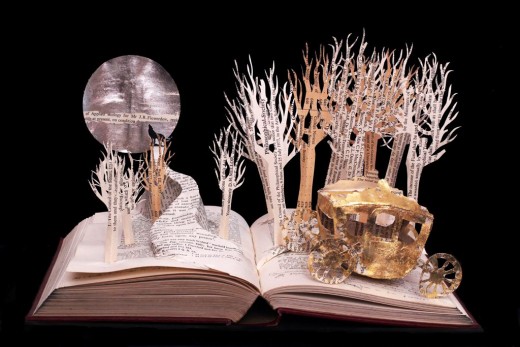 I came across Justin Rowe’s work when working as a volunteer at a storytelling festival in Yorkshire, where I live. Photos of Justin’s work were to be displayed at the Festival and I had the chance to ask him about them (example above).

He told me that he had studied for an art degree and after graduating had found work as an academic bookseller at the Cambridge University Press book shop in Cambridge, England. In 2010, when given the opportunity to decorate the shop window for Christmas, his wife suggested he tried making paper sculptures from old books.

He said, “I cut out a tree from a page of text with a scalpel and thought it looked OK, showed some other people and they thought it was better than OK!” Justin made additional sculptures, “…and when they went in the window I was surprised to see groups of people gathered round and coming in to comment on how wonderful they were.”

The following year Justin made more sculptures for the bookshop window on the theme of ‘The Twelve Days of Christmas’ song, which were later donated as raffle prizes to support a local charity.

By 2012 Justin had exhibited his book sculptures, including at an exhibition for Literature Week 2012 organised by the British Academy.

Justin’s inspiration derives from illustrations within the books, which are cut and sculpted into 3D scenes, or from Justin’s own imagination whilst using the book chosen as a source for his ideas.

(Image supplied by Justin to me) 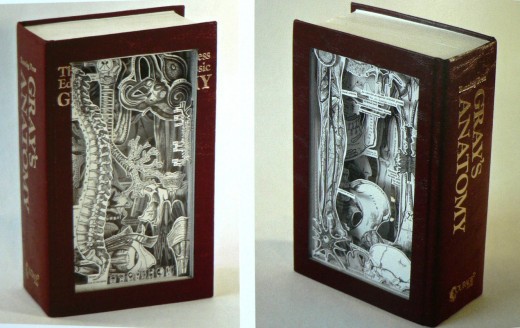 How does the idea of using a book as something to be carved into and transformed strike you?

At first – if you have a particular reverence for what books represent – you may be shocked. But thousands of discarded books are pulped each day.

When I was learning the ropes as a bookseller, I spent time at an Oxfam book recycling centre finding out about which books sold well, and which didn’t. At the centre, thousands of unsold second-hand books arrived from Oxfam charity shops and were unceremoniously dumped on conveyor belts. They bumped their way along the moving belt whilst sorters picked out anything that could be sold online – occasionally a valuable book ended up there. But most ended their lives tipped into great metal containers and moved onto be pulped and turned into … toilet rolls.

Book sculptors, on the other hand, use books as their medium and canvas – in terms of both inspiration, and as a physical reusable resource. The artists may be inspired by the text to produce artefacts that connect with the ideas in the chosen book. Or they may use the book as a three dimensional and tactile surface on which to produce their art.

All the artists represented in this article profess their respect for books – what those books represent – and many see their artistic creations as a transformational homage to the text that inspired the sculpture.

In the photograph, above, artist, Julia Strand, uses both sides of an old and outdated Gray’s Anatomy to show the ‘innards’ of the book. Julia rescues old reference books from garage sales or second-hand shops, and using a range of tools – knives, tweezers, pliers, and files – will carve into the book and rearrange the page contents to form a three-dimensional collage, In the illustration above, the book cover forms a ‘window’ into the collage. 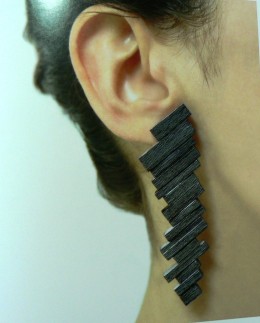 Book art is careful, slow work, requiring imagination, inspiration – and a steady hand with fine cutting and lifting tools. Books can be transformed into objects of beauty, and can perform a functional, as well as decorative purpose.

In the photograph, right, we see, for example, an item of jewellery produced by artist, Jeremy May. He describes these as ‘wearable narratives’. After first reading the book, he finds a distinctive quote that inspires the design.

Jeremy then removes pages that inspired him and reinforces these with additional recycled and laminated coloured paper, forming them into the required shape. He then buffs the finished item into a high gloss finish. Another example of Jeremy’s work is illustrated in the photograph of the ring immediately below.

The text that inspired Jeremy May to produce this ring was taken from The Everglades, River of Grass, 2011, by Marjory Stoneman Douglas. 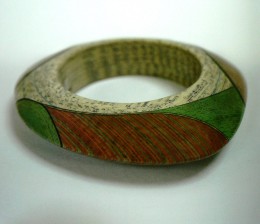 The ring is made with book pages, combined with additional green, brown, and grey recycled papers. 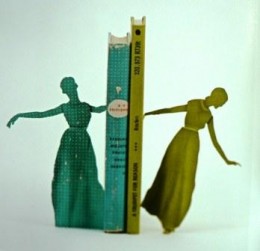 I really admire the imagination that has gone into this pair of ‘bookends’. The artist is Thomas Allen. Here he has shaped and carved out the two figures from the front boards of the two books. They have then been peeled out from the covers, and reinforced, to stand as lovely bookend decorations. 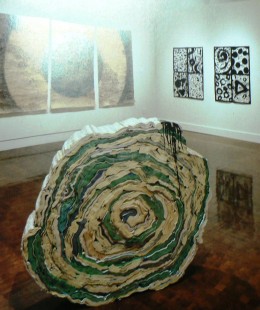 This photograph illustrates the work of artist, Jacqueline Rush Lee, who transforms books into sculptures on a large and visually stunning scale. The image shows hundreds of telephone directories rolled and screwed together and on display at the Honolulu Museum of Art, Hawaii.

Jacqueline’s artwork and artistic concepts usually link to the original purpose of the book. So here the telephone books project the visual idea of a telephone cable connecting people in the directories. 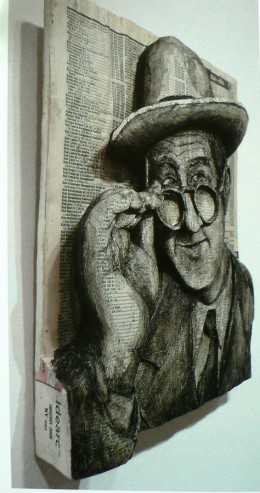 combine the pages. To produce a portrait like this, he first cuts and peels away pages to produce the desired 3-D effect. He then applies a black wash to enhance facial and other features, before sealing the work with acrylic to protect and preserve it.

This piece is titled, ‘I See You’.

Old readers may know that Phil Silvers (1911-1985) was a popular US entertainer and actor, best remembered for ‘The Phil Silvers Show’ in the mid 1950s. He played the part of Sergeant Ernest G. Bilko, a scheming, wily old sergeant at a peacetime US army camp. It was one of favourite television programmes in Britain at that time, so I have a great affection for this representation of Phil Silvers.

In addition to producing three-dimensional images, books can be carved into relief patterns. In the following two images, we see the surface of books carved and scooped out to produce the visually stunning effects seen here.

The image below shows eight books stacked with an oak tree carved into the fore-ends. The artist is Kylie Stillman. 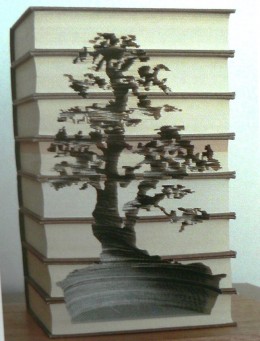 The photograph below (a personal favourite) is by Nicholas Jones and the book is an Australian Year Book. 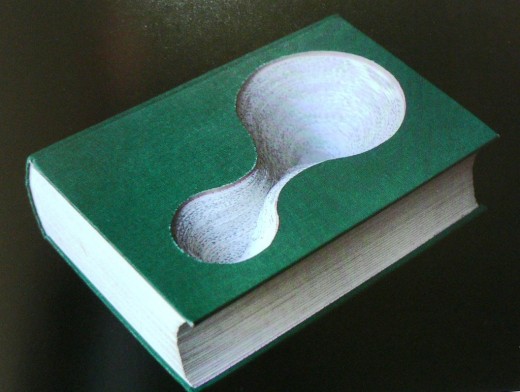 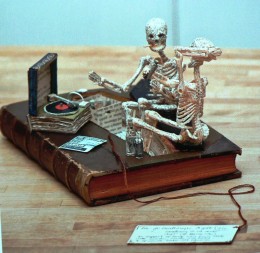 Over a ten month period in 2011, ten small book sculptures were smuggled into art and other cultural venues around Edinburgh by an artist, who has not to date revealed his or her identity. The sculptures were left to be found by the delighted staff.

The one shown here was apparently made to celebrate the publication of an Ian Rankin novel, The Impossible Dead . Ian Rankin is an Edinburgh based author, and the sculpture is an affectionate tribute to Rankin’s work and for his patronage and support of the arts in Edinburgh.

Tools of the book sculptor’s trade 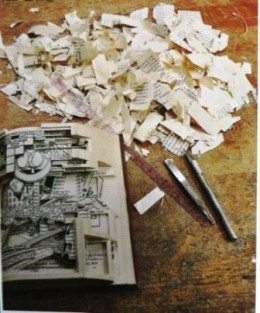 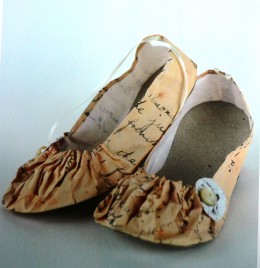 These hand-stitched shoes were made by Jennifer Collier from the pages of a cookbook.

For this work, Jennifer used the pages from a vintage cookbook, combined with ribbons and buttons. She treated the paper as if they were cloth, stitching the paper with thread and decorating it with buttons and other trimmings.

The resulting work is not functional as a shoe – but is a stunning decoration.