Home » All books » Boy soldiers in the Congo 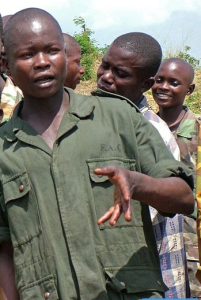 Children have been used for military services for almost as long as mankind has existed. In 1967, two men were driving through the Congo where they had the most frightening encounter with a couple of boy soldiers who held them at gunpoint. Read on.

The two men were rally drivers, Eric Jackson and Ken Chambers, and they were racing – of all things – an ocean liner from Cape Town to Southampton.

They inspiration behind this was the Ford Motor Company and the two drivers had experienced some pretty scary stuff on previous African trips. But this was truly terrifying.

Eric Jackson tells the story in his book, Petrol in My Blood, which you can see in the sidebar on the right or below.

The pair had come across what seemed to be random checkpoint.  It was out in the country, miles from anywhere. It was just a bar across the road. The car slowed down and there was no-one in sight.

The drivers saw that the bar could easily be raised manually and were just about to do so when a figure appeared from the tall grass where he had been sleeping. Waving an automatic rifle, he gestured to them to get out of the car and then proceeded to scream at them. Pointing the gun at them, he forced them through the tall grass.

He wore only a tattered pair of shorts, a filthy vest and a dirty bandage on his arm. He wore no shoes. Eric describes how he realised then that their captor was no more than thirteen years old. He had a dead expression in his eyes looked ruthless and was careless with his gun. When Ken didn’t move fast enough, the youngster hit him over the head with the rifle. The two men stumbled on through the grass.

They came to a clearing where they found another boy soldier. The first boy started shouting at his comrade and gesturing with his rifle to his two hostages. The only word they could make out one one he repeated constants – ‘espion’.

“He was telling his comrade that we were spies. We tried to explain what we were doing. The second boy, more placid, seemed to accept the explanation but the first was having none of it. He wanted the glory afforded to him as a spycatcher, evidently. He kept pointing the gun at us, safety catch off, finger on the trigger. Our own guns, of course, were back in the car…”

The boys started to fight between themselves. It seems that they only had the one gun and were fighting over it. It could have gone off at any time. The two drivers took the opportunity to run like hell. They made it back to the car – where they could still hear the shouts of the fight going on, and sped away.

As it says in Petrol in My Blood:

“‘Blimey, Jacko’ Ken said when we had put a few miles between ourselves and the pair of maniac boy soldiers ‘Spies, indeed.I’m a ruddy car dealer and a rally driver, not James bleedin’ Bond.'”

The book is available from Amazon. Read more fascinating adventures. Here are the details.