It’s much easier than you think to break and create habits.

I imagine that we all have bad habits that we’d rather not have. Furthermore, wouldn’t it be great to have some good habits? If it sounds impossible, let me give you some great examples that the book you see here can help you with. 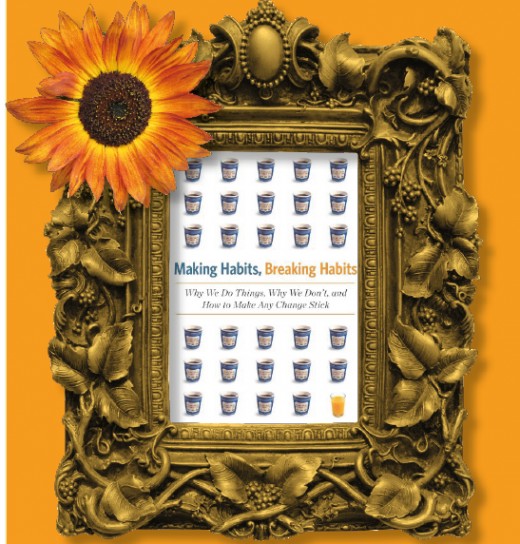 Many of us make New Year resolutions and I imagine that one of the most common ones is to get more exercise. I think it was about five years ago now that our doctor told my other half that he had high cholesterol. He offered drugs to lower it. I asked if there was any alternative and he said that the only option was exercise.

Is an exercise routine hard?

I guess it must be because the doctor looked rather taken aback that we’d rejected the easy-to-take pills. But himself embarked on a morning walk every day at dawn. All these years later, he’s still doing it every morning, come rain, shine or hangover. It simply became a habit, you see.

Do something for a week and it is beginning to be a habit. Do it for three weeks and it becomes second nature.

When you think about it, there have probably been several habits in your life that you’ve overcome. It’s natural and a part of human nature; part of growing up. We’d be a little weird if we still had the same habits we had when we were six months old (I’ll leave that to your imagination!) or when we were six or even sixteen.

You’ve done it, so you can do it again. It doesn’t matter how trivial they are. I don’t have amazing willpower but I know that I’ve stopped the following over the years:

There are many things that we do every day without really thinking about them because they are a habit. Think about things such as:

We don’t think about these – and many other actions – because they are habits. With a little thought and the help of this book, we can turn our bad habits into good ones.

Change your habits with help from this book

There’s no need to try to improve your life without help. Experts have studied habits for many years and the results of that research is available to help you.

Once you understand how habits are formed – and how they are broken – you are on the road towards improving your life, your health or whichever part of your daily routine that you think needs help.

Even habits that are classed as addictive can be broken, as any ex-smoker will tell you.

Let me give you an example. I used to be completely hooked on strong black coffee – the full version, not decaffeinated. I would drink a full pot of coffee (would that be about six cups?) before ten o’clock in the morning.

That seems ludicrous to me now ) I can’t remember the last time I had a cup of strong black coffee.I have replaced that habit. Now I drink herbal tea – something I used to hate with a vengeance.

That’s because human beings can change. We are adaptable – probably more so than we realise.

If you think back, you too can probably remember some habit that you used to have at some time, that you no longer indulge in.(Even if you have to go back to babyhood when you used to suck your thumb).

That’s the proof that you can change your habits,you can develop new ones and they will improve your life.