The Norman Rockwell painting that was a fake. 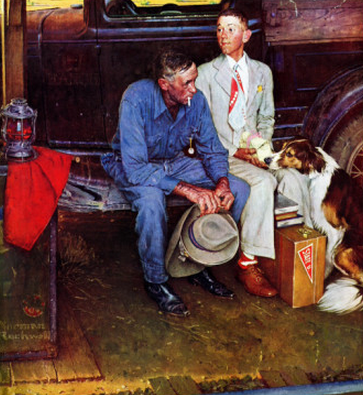 Breaking Home Ties is one of America’s favourite illustrations.It was created by Norman Rockwell in 1954, originally for the cover of the Saturday Evening Post.

For years it was exhibited and admired by the American people but there was just one minor detail – it was a fake.

More than fifty years after it had been painted, it was discovered that the artwork on display was a forgery. The forger himself was dead and behind lay a intriguing story of a family and a broken marriage.

At the time the illustration was created, Rockwell lived and worked in Arlington, Vermont,.It was a small and quiet community and several of his neighbours were illustrators and cartoonists who also worked for the Saturday Evening Post.  One of these was Don Trachte.

Don was a cartoonist who worked for the Post and he’d moved to the area in 1949. He was married with a family and he and Rockwell became friends. Don, like many other locals, sometimes sat for Rockwell as a model. Within the small artistic community, its members would often buy each others artworks, building up small collections.

In 1960, Don and his wife Elizabeth decided to buy Breaking Home Ties. It was a substantial financial investment in those days at $900 but the couple knew that Rockwell’s work was appreciating in value. Indeed, six years later, Don was offered $35,000 for the painting- which he turned down. Rockwell wrote to him and affectionately told him he was crazy 🙂

Don was willing to lend the painting to exhibitions over the years – it went as far as Moscow and Cairo –  but mostly it had pride of place in the Trachte home.

However, the Trachte marriage was beginning to breakup. Eventually they realised that the only option was divorce. Threshing out the financial terms of the settlement were prolonged, particularly because of the couple’s small collection of increasingly valuable paintings, but an agreement was reached.

Don and Elizabeth agreed that the paintings should be formally made over to their children; Don would be the custodian of the Rockwell and two other paintings and Elizabeth would look after the remaining five. On their deaths, the children would take possession. This was deemed very fair because the couple would still have the enjoyment of the paintings during their lifetimes but the children would reap the financial rewards, should they wish to do so.

The couple duly divorced and Don bought a small home which he used as his studio. The artistic community faded away but Don was still drawing and he remarried. Sadly his second wife became ill as the years went by and Don nursed her until she died in the 1990s. Worn out, Don went to live in an assisted living facility. With his consent, his now adult children lent  Breaking Home Ties to the Rockwell Museum.

At the museum, a small number of experts – museum staff – were surprised to see that the painting’s condition wasn’t what they’d expected. It just didn’t look quite right. But knowing that its provenance was impeccable, they put it down to the lighting in the gallery. Another expert wondered if it was a preparatory work rather than the finished painting. Or maybe its condition had deteriorated when it had travelled to overseas exhibitions. It certainly wasn’t what they expected,knowing the painting so well from its photographs and reproductions but its history was well known. It turned out that they were right to be suspicious.

Sanden was a successful artist and a Rockwell devotee and he consistently remained adamant that Breaking Home Ties was a fake. The family, especially Trachte’s eldest son Don Jr were disturbed by Sanden’s pronouncements but the museum still believed that the painting must have suffered when it travelled – they did not doubt its authenticity.

Don Jr’s unease became even greater when an important New York gallery contacted him and said that they would like to borrow another painting, by Mead Schaeffer, from the family collection. But they then decided against it, informing Don Jr that there were ‘discrepancies’ between photograph he sent them of the painting and the published version.

Don Sr died in 2005 and after the memorial service, his now adult children went to their father’s home and studio. Quite by chance, they discovered a painting by George Hughes in a closet. What was strange was that there was an exact replica of that painting hanging on the wall.

Put together the facts of the gallery’s rejection of the Schaeffer painting, John Sanden’s confident assertions and now the fact that there were two identical Hughes paintings — and the family were now seriously concerned. But Don had been contacted by a prestigious auction house informing him that it would be an excellent time to sell Breaking Home Ties. But how could the family do that when the painting’s origins were in doubt?

Don’s younger brother Dave had a practical approach to solving the problem. He lived close by his late father’s studio and regularly visited the place which had been untouched since Trachte’s death. He looked through his father’s papers, he looked for clues. Eventually, he found two photographs of Breaking Home Ties. At first glance the two photographs were identical. But the more he studied them, the more he realised that they were not alike. One was without doubt the painting he had grown up with. The other, he had to admit, was fractionally closer in appearance to the illustration that had been published on the cover of the Post.

Dave continued to search for clues. Regularly he called his brother Don to discuss the situation and his latest finds. They were baffled. They discussed their father who they remembered fondly. They recalled how he was a practical man in addition to his creative side. He had more or less rebuilt their family home and his studio with his own hands. Don remembered his father fitting wood panelling in the property —

Dave went to the studio and checked the panelling. Prising it away from the wall a little he could see the edges of two canvasses behind it. He called his brother to get to the studio quickly. The two men removed the shelves from the panel. It revealed five paintings – ones that they believed had been given to the custody of their mother when Don and Elizabeth divorced in the 1970s.  It was obvious what had happened. After their parents split up – but before the divorce was finalised – Trachte had copied the paintings, hidden the real ones and handed over the fakes to his ex-wife.

The mystery didn’t last long. They removed the panel on the  adjoining wall and there is was – Breaking Home Ties, the original Rockwell painting – looking as fresh and vibrant as the day it was painted.

Elizabeth was still alive and aged eighty nine. Don and Dave went to see her. She was sitting in her farmhouse in her rocking chair and on the walls were the paintings she believed to be genuine. She listened as her sons explained what had happened. She listened silently, then looked at her ex-husband’s fakes. She remarked wryly,”I’m not surprised”.

Later that year the Trachte siblings attended an auction at Sotheby’s in New York. They watched the auction on a video screen from a private gallery adjacent to the saleroom. As they watched, the genuine Breaking Home Ties was sold for just over $15 million.

Don explained that when he had first looked through his late father’s belongings, he had found a sheet of paper in the safe. he had dismissed it at the time. It bore no writing, just seven rectangular shapes.It was only when the paintings were found that he realised it showed the exact locations of the genuine painting behind the panelling.

Note: You can buy reproductions of the genuine Breaking Home Ties here. What a great idea for a gift – especially if you print this page and include the fascinating story!