Are the British and Americans divided by a common language? Yes!

When I first came to live in the States, I truly felt that I needed an Anglo-American dictionary. Yes, the two countries speak the same language on the face of things but there are so many differences and misunderstandings occur all the time.

I have been here for twenty years now and the situation is better – but still not perfect. Even after all these years, I might look at an American with a blank stare – and vice versa.

If only I’d had a dictionary 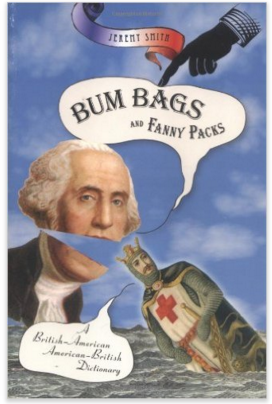 It would have been invaluable. It didn’t help that my first job here was selling used cars. ‘You’ll like this one”. I’d tell a customer ‘It’s very good on petrol (gas), we’ve repainted the wings (fenders), it has a new windscreen (windshield) and let me show you under the bonnet (hood) and in the boot (trunk).’

Oh dear, no-one had a clue what I was talking about.

Then there was food

The first time I was invited to a meal at an American household, it was Thanksgiving. It sounded as if it was going to be exotic. Rutabaga. What’s that? Green bean casserole? Never heard of it. There would be things like biscuits (with dinner?) and romaine. Some food words I came across were just ordinary foods with different names (like rutabaga = swede).

I was rather annoyed that American food shops (grocery stores) didn’t sell coriander until I realised that it was there all the time, calling itself cilantro.

It is a source of amusement to Americans that to the English, your bum is your posterior and not a tramp. And a tramp in the UK would be a call girl. And the English are invariably amused by the American use of fanny, this being to us a very intimate part of the female anatomy.

I was once in the office here in the States proof-reading. My colleagues were all English but I thought I had the American language sussed by now – I spoke a sort of hybrid. ‘Oh no’ I exclaimed, finding an error in the text ‘I’ve missed a period!’ My English colleagues didn’t realise I meant a full stop and thought I was having a pregnancy scare.

Are you confused? I am

And yet I was brought up watching American telly (TV). I know who Jethro Bodine was, And Darrin Stephens. I can remember even which programme (show) had a character called Wilbur Post. I thought I knew this stuff. (Do you remember them? Let me know in the comments section).

An English / American dictionary can keep you out of trouble

I find that I’m loving these David Mitchell videos. If I never write anything again, and disappear from public view, you’ll find me at You Tube, watching him.

Here are more beefs, with which I agree.(Wasn’t that beautifully grammatical?)