Home » All society » Plane Lost in the Andes for Fifty Years

In 1947, an aircraft flying over the treacherous Andes Mountains, and all the passengers and crew aboard, disappeared into thin air. The radio operator sent a strange message which has not been deciphered to this day and the aircraft wasn’t seen again – for over fifty years.

The plane, Star Dust, was a converted World War 2 bomber. The crew numbered five and all were experienced from the war. There were six passengers. Among them were:

Was the plane attacked because of one of these three passengers and the items they were carrying? Or was it, as some surmised, that the aircraft was abducted by aliens? (Truly, this was a popular theory at the time)

The plane was heading from Buenos Aires to Santiago and flying over the Andes. It departed in the early afternoon of August 2nd, 1947. Four hours later, the radio operator sent a message to Santiago saying that their arrival time was estimated to be within a few minutes. But the aircraft never arrived. A massive search was undertaken but nothing was found.

What does STENDEC mean?

At the end of the last radio message was a seven letter word, in capitals – STENDEC. No-one has ever been able to discover the meaning of this. It is,of course, an anagram of the word ‘descent’ which is what the aircraft was planning to do when the radio message was sent but is that relevant?Or were those letters the first initial of a sentence – and therefore some vital coded clue?

The Santiago operator who received the message didn’t understand, reasonably enough, so asked for confirmation. The airplane repeated the word – ‘STENDEC’.

Then, within two months of each other, two other aircraft from the same airline also disappeared…….

It was discovered that the civil servant on board was a King’s Messenger – how sensitive were the documents he was carrying? We have to remember too  that at the time, Nazi war criminals were escaping to South America. Could that be a connection? Rumours started that there had been a fortune in Nazi gold in the aircraft.

Discovery of the aircraft

In 2000, a group of people who were hiking in the Andes found remnants of the aircraft in the Tupungato Glacier. Yet this was in an area that had been searched extensively back in 1947 when the plane disappeared.

Then it was discovered that several body parts, including a manicured hand, were found to be perfectly preserved due to being frozen for the last fifty three years. The Argentinian army then mounted a campaign to discover the remains of the aircraft and delve deeper into the mystery. A hundred soldiers were deployed.

The expedition went as far as they could towards the glacier by army truck. When the terrain became unsuitable for vehicles, they rode mules. Eventually, they had to proceed up Mount Tupungato on foot. One of the first things the expedition found was a wheel from the landing gear. Over fifty years after the plane had been lost, the tyre was still inflated. This led investigators to surmise that the landing gear was still tucked inside the aircraft – the pilot had not been intending to land.

When the propeller was found, it indicated that the engine of the plane had been functioning normally when the plane crashed. Therefore, investigators now knew that engine failure wasn’t the cause of the crash. As more fragments were discovered, it was found that the debris was scattered over a relatively small area, showing that the plane had not exploded or been the victim of a bomb.

But the wreckage found was indicative of a huge impact. Yet it seemed that right until the last moment, the aircraft was flying normally and there had been no explosion. So far, the mystery of what happened to Star Dust was deepening – no answers were being found.

Investigators then found the first evidence related to the people who had been on board. They found a perfectly preserved woman’s shoe. Then they found, well, human body parts, none of which were recognisable. But the mystery still exists. Despite thorough searches, most of the aircraft is still missing and there are still no clues regarding its fate. Why had the plane disappeared just fifty miles from its destination? Why wasn’t it found during the massive search in 1947? And how did it reappear fifty three years later?

Because the wreckage had been located on a glacier, an expert was consulted who told the investigators that they had missed a vital point. Perhaps the wreckage they had found had not been the crash site. After all, glaciers move. Gravity moves them downwards – down mountain sides – so the glacier expert concluded that Star Dust had actually crashed much higher up the mountain – what the investigators had discovered was simply the parts of the wreckage that had been brought down from the mountain over the last fifty three years.

Investigators realised that the aircraft, for whatever reason, might have crashed into the face of the snow-covered Mount Tupungato. The impact had caused an avalanche which buried the wreckage. This would then have been absorbed into the glacier. As more snow fell, the wreckage became more engulfed in the snow and ice. In fact, Star Dust gradually became part of the glacier. Thus hidden, it travelled slowly down the mountainside, deep inside the glacier itself, out of sight.

The glacier expert explained that the clue was at the bottom area of the rock-covered Tupungato Glacier. Gradually,over fifty three years, the plane wreckage moved down the mountain hidden within the glacier. When the glacier reached the lower part of the mountain, where temperatures are higher, the ice began to melt, revealing the wreckage. It’s surmised that over the years, the glacier will reveal more parts of the wreckage as time goes by.

Once the crash site had been located, investigators realised that although the plan’e final message said it was just a few minutes away from landing, the plane had actually been fifty miles off course. Studying archived weather records, they realised that the aircraft had encountered bad weather. This had caused the experienced crew to climb above the cloud.

This bad weather though, didn’t explain why the plane had crashed. What the crew didn’t know was that they were about to encounter a weather phenomenon that was largely unknown in those days – the jetstream. This is a powerful wind that develops above the clouds. Old weather records show that Star Dust flew head first into the 100 miles per hour winds of the jetstream which slowed them down considerably.

The crew had radioed saying that they were increasing their altitude to 24,000 feet above the cloud. This meant, of course, that they could no longer see the ground and in those days, there were not the navigational aids aircraft have today. Because of the jetstream slowing them down, they thought they were approaching Santiago whereas in fact, they were fifty miles short of their destination.

The crew thought that they had passed the mountains and were just a few minutes away from Santiago. But in fact, the mountains were still ahead of them. Confident that the plane was approaching Santiago airport, the crew began their descent, fully believing that as soon as they were out of the clouds, they would see the airport below them. In fact, they were heading straight for the face of the Tupungato Mountain.

So now we have solved the mystery of why the plane crashed and why it disappeared for over fifty years. But one mystery still remains. 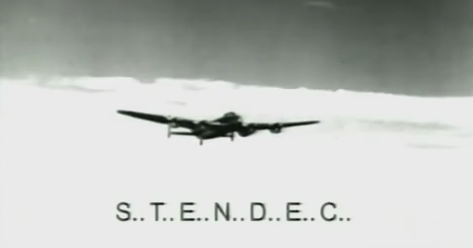 What is the meaning of STENDEC?