Home » All society » The Bombing of Buckingham Palace in WW2

The Second World War: The Bombing of Buckingham Palace.

Buckingham Palace was hit by bombs seven times during the Second World War. It was just a matter of sheer luck that King George VI and Queen Elizabeth (know to most of us as the Queen Mother) weren’t killed or very badly injured when the third raid took place on September 13th, 1940..

Two German bombs fell in the quadrangle – the centre courtyard – and in addition to structural damage, the windows shattered sending lethal shards into the rooms of the Palace. The palace had been bombed on two previous occasions, the most recent being only four days previously.

The king and queen were in one of the rooms near where the bomb went off. But crucially, the window to that room was open at the time. Hence no glass was blown into the room and the royal couple escaped unscathed. One man did die in the attack though, due to the shards and several others were injured..

The bombing attack took place at about eleven in the morning – a time when it was likely to be fully occupied with members of the royal family, staff and workmen. The king and queen were quietly sitting enjoying a cup of tea when the bombs exploded just outside their window.

The royal chapel at the palace was also damaged at the same time by a third bomb. The bomb plummeted through the roof destroying the altar, causing a great deal of structural damage and hurling tons of debris into the basement.

The young princesses, Margaret and Elizabeth, were living at Windsor Castle – twenty miles away from the palace – at the time and indeed for the duration of the war. The government had tried to persuade the royal family to live somewhere safer than London, with its constant attacks from the Luftwaffe.

The whereabouts of the young Elizabeth and Margaret were kept secret from the press and the public. From Windsor though, the pair made a broadcast to British children who had been evacuated to the countryside or even to other parts of the world.

Unknown to the family at the time of the bombing, a delayed-action bomb had also been dropped in the palace grounds. Fortunately this was discovered by not finally made safe and detonated until almost twenty four hours after it had been dropped. Even the ‘harmless’ detonation caused damage and created a huge crater. 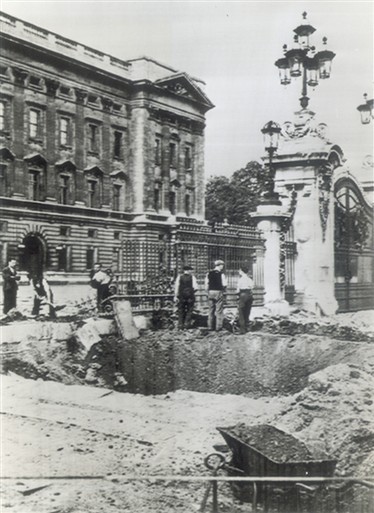 Two days later, the palace received  further direct hits – some bombs falling in the grounds and another destroying a bathroom in the palace. And two days after that, more bombs fell into the palace grounds – again at about eleven in the morning.

Further bombs fell in October and on November 1st, both causing damage. Three months later the palace’s North Lodge was destroyed and  policemen killed during a Luftwaffe raid. Finally three years later, the grounds, walls and outbuildings were badly damaged in a raid.