Andy Royston follows the fate of one of England’s most famous cars.

Garage Manager: You must have shot an awful lot of tigers, sir.
Charlie Croker: Yes, I used a machine gun.

Charlie had just done time in the slammer but wasn’t about to let the valet parking company know.

He’d left his silver Aston Martin DB4 in the giant underground parking lot underneath Hyde Park in London. He didn’t go there directly. He told his girlfriend Lorna, who had picked him up at he prison gate, “Take me to my tailor”.

The smart gray semi-solid gray suit came courtesy of Douglas Hayward, Caine’s personal tailor at the time, who also dressed Roger Moore’s James Bond. It has that 1960s close fit – very different than the baggy number he wore when released from prison. The suit tells us that this is clearly a man keeping up with the times, which in the mid sixties were very much a’changin’.

A little more air through the second carburettor.

The DB4 give us a clue as to how long Croker has been behind bars. A convertible DB4 was introduced in ’62, and within a year the DB5 was all the rage. It had starred in Goldfinger, and you can bet Charlie would have upgraded to the 4.0 all aluminium engine and the 5 speed transmission. The DB4, though, was as rare as hen’s teeth even then.

As it was he had to liberate the DB4 -with the famous plate 163ELT – from the parking garage – in reality George Yard Underground Parking Lot at Grosvenor Square.  By the time the old girl was revealed with a grand flourish by the garage manager, Charlie was now Captain Croker. After nice bit of improvised banter with John Clive “There’s a bounty for shooting tigers, you know…” she started first time. He was back in business.

“Typical, isn’t it? I’ve been out of jail five minutes, and already I’m in a hot car” 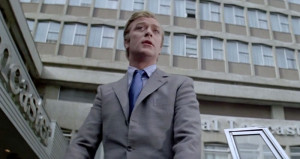 The next sight of the Aston Martin is drawing up at the reception of the Royal Lancaster Hotel, though the driver wasn’t Michael Caine, who famously didn’t have a driving license. The shot was edited to show Croker emerging from the Aston and walking into reception – his status already elevated to Lord Croker by now. He had a wild night ahead of him – His girlfriend Maggie Blye, the glamorous Mrs. Beckerman, still in her “widow’s weeds” and a bevvy of girls con négligée.

“Well, I thought, a coming-out present! Now, what would you like?”

For the next few outings, Lorna (played by MaggieBlye) was at the wheel and the Aston was given the swinging sixties treatment. She memorably turns up in knee-high boots and a brown leather skirt suit after bringing her silver Aston Martin to a stop outside her Portobello Market mews pad. S fashionably cluttered with sixties bric-a-brac. She climbs out, and enters her place only to wind up pelting Croker with stuffed animals for philandering in her absence.

Of course the whole premise of the movie is a daylight robbery of bullion on the continent, carried off by a team of lovable british rogues.

“You all know Bill. He’s just done three years in Parkhurst. He’s as honest as the day is long. You can trust him…” 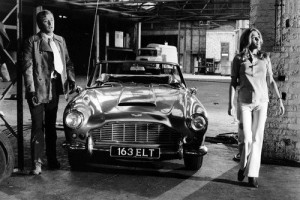 Classic film still of Michael Caine and Maggie Blye. Click on the image to buy a print.

Once the plans are hatched a number of classic motors are prepared for the heist, which centers on three souped-up Mini Coopers and a trio of classic British sports cars to provide a quick getaway if things go wrong.

Two of these fast cars were Jaguar E-Type, Series 1’s. These cars were at the time the British rival to the Italian Lamborghini  Miura that so dramatically opened the movie (more on the Miura later). The two cars were not the newest models though, and the producers picked them up for a mere nine hundred nicker. One was bought from Richard Essame, the actor who played ‘Tony’, one of the Mini Cooper drivers. Sesame drove the car to location in Italy and where the production team thought it would be ideal in the movie and purchased the car from him. Bargain. Even though both the E-Types were given a battering on the Alpine Grand Saint Bernard Pass, one managed to survive. The red 3.8L Roadster (848 CRY) is alive and kicking to this day, and probably worth a lot more than nine hundred.

The caper really begins with the The Three Fast Cars disappearing up the winding mountain roads in the direction of Vieyes and Cogne – typically British the boys are driving on the wrong side of the road. But they don’t have things easy, because…

“Well, gentlemen, it’s a long walk back to England.And it’s that way.”

A masterly ambush by the mob, make no bones about it. The location was a good choice – Mussolini was reportedly ambushed up here by the communists. Any British movie goer, and car buff will know this scene well.

For those who don’t know the movie, Lord Croker and his fast cars are stopped on a remote alpine road by Mafia boss Altabani at the same pass where they killed Croker’s old pal Beckermann early in the movie. Altabani warns Croker that the Mafia are aware of the gang’s intentions and smashes their E-Types, and sending Croker’s personal Aston Martin DB4 drophead down a deep ravine as a warning.

Now there’s much debate about how much of the Aston Martin went over the edge of that ravine. Some say that the original DB4, seen in the London scenes, never made it across the channel after blowing an engine.

The stand in, that recieved the damage and was thrown over the cliff wasn’t in nearly as good condition and refused to expire in the required explosion. Director Peter Collinson wanted the car to go out with a bang so a quality body building firm in Turin dressed up a Lancia Flaminia 3c Cabriolet to look like an Aston and this is the car that we see rolling down the rocks.

Eagle eyed car buffs have spotted that the car mysteriously goes from left-hand to right-hand drive, and the bonnet opens from the wrong end.

The smashed red jag? Totally restored in the early nineties and has been featured in magazine articles and on BBC’s Top Gear. Current owner is Jaguar author, motoring historian and founder of The E-Type Club, Philip Porter.

As for 163ELT, the car is very much a star attraction these days. The car has made appearances in pristine condition at car shows – notably the Concorso d’Eleganza Ville d’Este. Its worth? Well put it this way. Bonhams reckon that with the exception of the Zagato, the DB4 Convertible is the rarest Aston Martin of the David Brown era. Only  70 were built, six less than the legendary DB4 GT. The one that actor Sir Peter Ustinov had delivered in 1962 recently went under the hammer for one and a half mill. 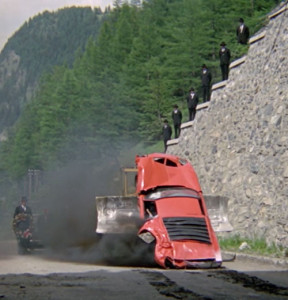 But what about the Lambo, you may ask?

The films opening sequence features one of the most coveted sports cars in automobile history, sweeping up the Alpine curves as Matt Munro croons “On Days Like These”.

The crew just got to film this magnificent machine. It was driven by factory client manager Enzo Moruzzi to the Gran San Bernardo pass in Italy for 3 days’ filming, returned to the factory and dispatched to the Lamborghini dealer Zani on 2nd July 1968 and never seen again. The car that emerged, wrecked from the tunnel, was in fact a wreck anyway and had no engine. Still, even the idea of deliberately wrecking such a wonderful sports car brings tears to the eyes.

By the way – the Lambo’s for sale. You’ll need to pull off a bank job to afford it though.