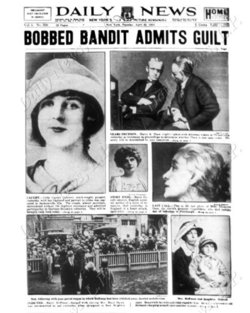 In 1989 it was clear to Ed Cooney Jr that his mother, now aged eighty five, was suffering from Alzheimer’s Disease. Ed had been a computer programmer and had moved to Florida when he retired. His mother Celia, having no other family except Ed and his brother, had also moved from New Jersey to the Floridian sunshine.

Ed didn’t realised that his mother had lived in Florida before – or anything about the unusual circumstances in which she had left the state. He also didn’t know that he’d once had a sister who was buried there.

One of the symptoms of Celia’s disease was that she liked to wander away from home. She would set off to walk to New York, where she had spent most of her life. And of course, it was often the police who brought her home. Celia hated this.

One day she told Ed why – ‘they’ll find out who I am’ she explained. Ed asked her what she meant and she told him that before he was born, she was the famous Bobbed Haired Bandit. He had no idea what she was talking about – he assumed that it was the Alzheimer’s talking.

Born in 1904, Celia Roth had a dreadful childhood of poverty and hardship. When she was in her teens and working as a laundress she met the tall and handsome Ed Cooney and the couple fell instantly in love. They courted, married in May 1923 and in September discovered they were expecting a child. They were delighted.

But Celia was also worried. The couple lived in a furnished room and she wanted to give her baby a better start in life. So they developed a plan. Ed had access to a car and he owned a gun – not unusual in those days for even law-abiding men – and they decided to rob a grocery store.

Their first robbery took place on 5th January 1924. Celia entered the store and asked the clerk for a dozen eggs. Then, as Ed entered the store behind her,  she produced her gun. They got away with almost seven hundred dollars – twenty two times Ed’s weekly wage. It’s said that they then staged seventeen other robberies and Celia, with her fashionable bobbed hair became known as the Bobbed Haired Bandit.

The newspapers of the day loved the story. Although they mentioned Ed, her sidekick, they were fascinated by this young, attractive and tiny girl, Celia was only five feet tall and pleasantly slender. Their final robbery was on April 1st. They intended it to be their biggest and last. It went wrong. A sales clerk was shot (just a minor wound) but worse was that the location was close to where they lived. And – it was obvious now that the girl bandit was very pregnant. Celia and Ed fled to Jacksonville in Florida.

At first the police followed several clues that were red-herrings. But slowly, because the last robbery had been so close to home, the couple were identified. They couldn’t be found, but the police knew who they were and had accurate descriptions. Public opinion began to change. Before, it was assumed that the girl bandit was a ruthless ‘flapper’ and her companion no more than a common criminal.

Now they discovered that they were a married couple who had been respectably wed in a Catholic church, that Ed had acquitted himself well when he was in the navy, that he had been a good and reliable employee – and that a baby was on the way. The public now assumed that it was poverty, rather than fun, that had led them to their short life of crime.

But things weren’t going well in Florida. Because their last robbery had been bungled, they fled with no cash. They had to rent a shabby, dirty room and Celia was due to give birth. They had no money for medical facilities. Ten days after their fruitless robbery, she went into labour, several weeks early. The labour was long and rough but she eventually gave birth to a girl.  Less than two days later, the baby died.

The Bobbed Haired Bandit: A True Story of Crime and Celebrity in 1920s New York

Celia and Ed were adamant that they wanted a proper burial for the baby. This is so sad – because it was the undertaker they chose that finally led the police to the couple. They were found hiding out in a grim Florida room just after midnight on April 20th, 1924.

Celia and Ed surrendered – they knew it was over.

Celia was only just twenty when the couple were arrested. Ed was five years older. THey were still devoted to each other.

What happened to Celia and Ed Cooney?

The story of what happened to the couple after their crime spree is almost as fascinating as their short career. They did not deny that they had been robbers, although it’s likely that they committed only half the crimes that were ascribed to them.

Both were found guilty and jailed.