As we say a fond goodbye to George Michael, Andy Royston remembers the hairspray days. 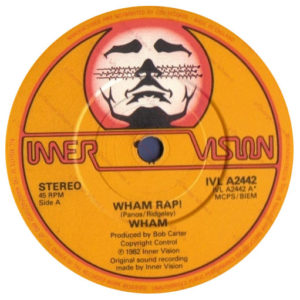 Enjoy What You Do.

It had been a mad year. I’d spent most of it living in a South Manchester bedsit, wasting time on a year out of college.

Way too many nights had been spend on dank dance floors and working (badly) on my day job running socials at the Poly student union. I spent life back then wearing a leather jacket and a Sony Walkman, dreading the moment that I had to get back to real life.

In theory I was still studying, but a year booking bands, organising night life and never going home had put this in the shade. One more year and then what. I didn’t want to work in the industry I was training for, but didn’t want quit altogether. I’d been ostridging the problem for too long and it was time to take my head out of the sand.

In the clubs I had been grooving to a 12″ single called Wham Rap (Unsocial Mix) and a line I’d been hearing pounding from the disco speakers was “Do you enjoy what you do”. It was clear, as I began to disappear into a whisky glass, that I really didn’t.

Not long afterwards I woke up in a strange Salford tower block and had no recollection of how I’d got there. The people in the flat, high above the Salford Precinct were not totally sure who I was either. A week later I watched two friends getting far too serious with some tin foil and a lighter and realised I needed a big change. 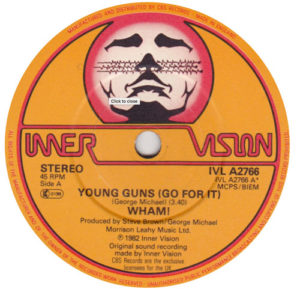 Young Guns, Having Some Fun

“See me, single and free
No tears, no fears, what I want to be…”

So to an attic flat – a “Rented room in Whalley Range” for my trouble and pain.

In many ways it wasn’t much of a step up from the bedsit, but the two Mersey girls who would be my flatmates were instantly a huge bonus. Both were funny and positive with a fine line in sarky humour, and within days there we were on a daft day trip to Blackpool. Silly sunglasses, fairground rides and lots of wine in Yates’s. Guaranteed to get my mind off things.

The all-in together atmosphere at 2 Alness Road was the opposite of what I was used to. Tucked up in the eaves of a draughty old town house there was barely room to swing a cat – the kitchen was tiny and with no living area we ate and hung out in each others rooms.

I barely noticed that I was falling in love with Chris, the most gregarious resident. All kohl eyes, wild black hair and a big grin, she was adept at burning the candle at both ends. Like me she was setting about her final year studying, and her enthusiasm for college work was infectious. Quietly I’d been in a panic about what to do to get my studying back on track – and here in a blaze of lipstick and eyeliner was someone who got me back down to business in an instant.

Enthusiasm for a night on the town or two was equally obvious. The girls adored dressing up and making up, and were outrageous in their shabby-chic hard-times creations. This was the height of new wave fashion, so wild hair was in. Teased, back combed and recitaled we left to hit the nightclubs and student bars made up to the nines. Me included. 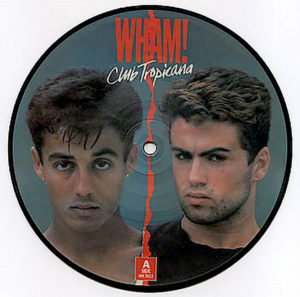 By the end of the academic year, with my social life revolving entirely around Chris, Sue and their equally beguiling friends, studying and partying was all about to come to an end. After years of living low and rarely socializing with the same folks for very long I was really loving the way that my college days had turned out.

Meanwhile 0n the radio those nice Wham! boys had pretty much taken over as the leading lights of British dance pop. George Michael to some degree was someone to take the piss out of. A coming-of-age new waver, dancing with the disco dollies on TV after his first Club Med to Majorca. The white teeth and blow dries were so straight. The crossover appeal of their music though was huge.

Before I’d met the girls, I’d sometimes go alone to Manchester’s soul clubs and lose myself in the dry ice, dancing to what mates used to call furry-dice music – Frankie Beverly and Maze, Ashford and Simpson, Kool and the Gang and Shalimar. With my Clash-style duds I did not fit in much with the jheri curls and spandex crowd. Wham! were clearly kids who’d done the same as me, and they turned it all into gold. The early Wham! vibe was initially pisstakey and this early edge gave them a little hipster credit. “You got soul on the dole/You don’t take no shit from the benefit”

Nights out with the girls was always a pleasure – the extended gang had eclectic dance tastes and frequented places that had a mix of styles. Rockers reggae, old soul, Grandmaster Flash and goth punk all blended on these long weekend nights. I can still smell the crimping irons and the hair spray. Amigos enchiladas on the night bus home. 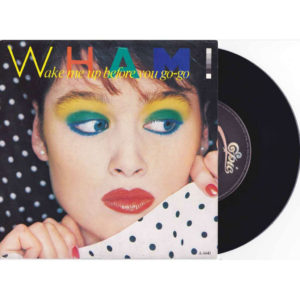 Wake Me Up Before You Go Go

Getting my degree turned into a breeze thanks in no small part to these days at Alness Road. My final year in Manchester was a perfect storm of fun and creativity. My inclination to go it alone dissolved in a breezy relationship that continued south to London. It certainly wasn’t the plan, as neither Chris or I had Dick Whittington syndrome. It wasn’t about seeking fame and fortune – more that a good, well priced flat was available and Chris had a persuasive old school friend living down the hill in Finsbury Park.

So we moved to London and suddenly, after a year together we were a couple! Another of the gang – Sarah, a fashion model shock of leather and lace – also joined us. Not one of us had work, money or connections in the Capital and it turned out that I was the only one with an inclination to stay. I hadn’t graduated in graphic design as such but I was determined to meet all my alt design heroes (Malcolm Garrett, Dave King, Neville Brody, who was partly responsible for getting me my first real job) whereas Sarah and Chris had half an eye on moving back north where the parties (and the jobs) were.

Chris and I began to make a pact – she had an eye on teacher training and moving back up to the North West. I was beginning to love London and wanted to stick around. In the meantime we’d play house and have a fun time together. And if the time came to make bigger decisions we’d take them. Maybe. 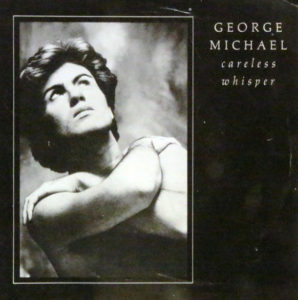 As the music dies, something in your eyes
Calls to mind the silver screen
And all its sad good-byes

Chris applied for her teaching course and by Christmas it was settled. She’d be leaving London to start her training and I’d stay in the smoke. It seemed a logical choice in spite of our easy time together. The long goodbye was the stuff of movies – her increasingly spending time partying up north while I set about opening a small art studio in an old church in Crouch End. By the following summer it was all set; the hairspray days were coming to an end and before long we’d packed up and I helped move her into new digs in Reading.

On TV and the radio George Michael was through his Club Tropicana period, now producing bitter sweet ballads clearly thinking of ditching his own partner and going solo.  I was mindful not to take the impending break up too seriously, but there were times that it had seemed a little drawn out for comfort.

At the time those radio hits didn’t help me at all, though; Careless Whisper, When Doves Cry, What’s Love Got To Do With It, Time After Time, Only When You Leave. John Waite’s ‘Missing You’ still brings back the sentiments even today. But all this was ultimately sentimental hogwash – we had lives to lead. 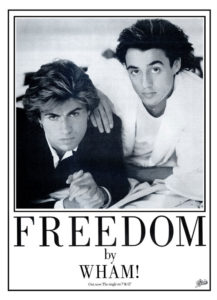 So George Michael ditched Andrew Ridgeley and took his first steps as a solo artist. Even in the fickle world of pop music, this all seemed so swift and brutal. What was Andrew to do?

For me going solo proved to be easy. I missed the banter, the larks and the girly stuff around the place. But the serious business of setting up as a designer was all encompassing. For most of the next year it was quite literally back to the drawing board and making things stick. I’d begun work in the art room of a hip co-operative listings magazine and was picking up work on the fringe scene. It was hard work but fun.

Freedom was well worth the effort. 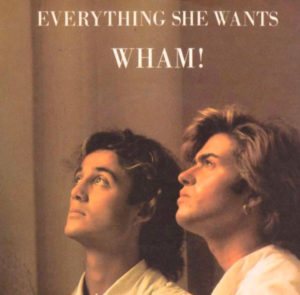 I said you were the perfect girl for me,
But now we’re six months older…

Slipping back into just good friends ultimately worked out. Just one embarrassing aberration after a New Year party six months on, all swiftly forgotten. We were firm friends now – I’d no business stepping through the looking glass.

As my career as a designer began to pick up it was cool to watch how the girls’ lives evolved and grew. Over the years friendships have held true and I always look forward to visiting and catching up with the various adventures. This was ultimately a happy time full of great memories that don’t fade.

George Michael of course finally went solo and became a world class act, to be mentioned in the same breath as Madonna and Prince and Michael Jackson. Apart from that very first plain labelled release on Innervision (when they were still unknown Watford teens) I haven’t spent a farthing on his music. Yet with today’s news of his passing the songs and the memories flood back. George was just a few years younger than I so his passing is all the more shocking. He seemed fit, healthy and in control of his life and there was a lot of reason to feel positive for the future.

Thanks for the coming of age soundtrack, fella. I don’t think I’m the only one who discovers how your music provided a soundtrack to life.