Dada : Buffoonery and a Requiem Mass

Home » All style » Dada : Buffoonery and a Requiem Mass

Andy Royston takes us back one hundred years to the very birthplace of meaninglessness. The Cabaret Voltaire, opened on 5th February 1916 in a back room of run down old cafe in the city of Zurich, Switzerland.

“What we are celebrating is both buffoonery and a requiem mass.” Hugo Ball : Diaries

In 1916 the Great War was raging all across Europe, and there was no room for art anywhere. Swiss neutrality became a place of refuge for the avant-garde. 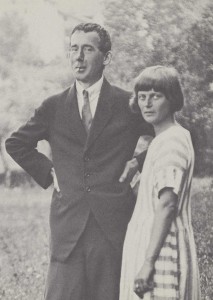 Hugo Ball, a German theater director was one of many artists who had made a home in exile in the city of Zurich, and with his future wife Emmy Hennings Ball set about forming a new artistic and political cabaret in the city. The patron of a cafe called the Holländische Meierei was cool with these young artists using a back room as a base for the anarchic art movement that Hugo Ball had named Dada.

In German the term meant yes, yes… A dismissive goodbye, “get off my back” kind of word.

Ball and Hemmings had met in a Munich bar three years before. Emmy was a year older than Ball, an expressionist playwright,  and had already lived the life. She was an itinerant actress and nightclub performer who had travelled across eastern Europe, had a broken marriage and seen time in prison for forging passports. 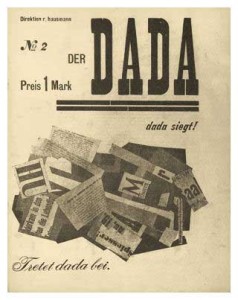 The two of them had left Germany after participating in an anti-war protest in Berlin, but found life in Switzerland hard. Zurich was awash with expatriates of all kinds – not least Russian Socialist exiles, pacifist German expressionists, known writers and a bunch of young German and East European hotheads who would join Ball’s daily craziness.

The five principal founders of Dada – Ball, Arp, Janco, Tzara, and Huelsenbeck) had vastly differing attitudes to their new art movement. Tristan Tzara and Richard Huelsenbeck took it very seriously indeed, while to Hans Arp it was one big joke. 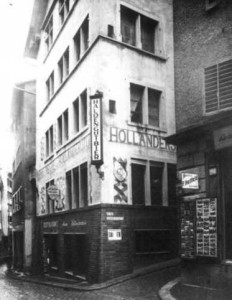 The Holländische Meierei at Spiegelgasse 1, Zurich

The cafe space they took over had a small stage, a piano and space for tables that could fit 40 or 50 people. Ball reckoned that providing a cabaret with “artistic entertainments” would attract many of the intellectuals who lived in the old quarter neighborhood. On the 5th February the cafe was decorated with  futuristic posters and ‘Coloured papers, ascendancy of the New Art, abstract art and geographic futurist map-poems.’

Hans Arp would describe what followed as total pandemonium, and Richard Huelsenbeck wrote about the violence and drunkenness that the cabaret habitually generated.

The protagonists would say that they set out to outrage the public, but I think it’s safe to say that the public had much more pressing things to concern themselves with. The Gallipoli campaign was already in progress, and within days the battle of Verdun would begin between soldiers of the French and German armies. 750,000 Franco-German casualties in 299 days of battle. 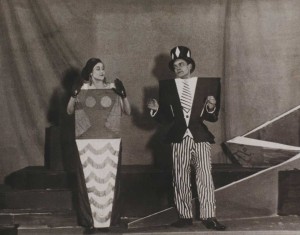 On the small stage performers recite poems, shout manifestos, sneer and strut and charm, sing, dance, and make music. THere was no real plan – The provocations and ‘experimental’ events would include a balalaika orchestra organised by the Russians in the audience and readings of French and German poetry.

The cabaret was closed on June 23rd after persistent complaints from the public, but the ideas and the momentum just grew. Ball edited an anthology publication Cabaret Voltaire which included work by Apollinaire, Arp, Cendrars, Huelsenbeck, Kandinsky, Marinetti, Modigliani Picasso and Tzara. The latter soon became the driving force behind Dada, publishing poetry collections and a series of ‘manifestos’ and magazines that attacked the social, political and cultural attitudes that failed to oppose the war.

The first public Dada soiree was held at the Waag Hall in Zurich on the 14th July – . an evening, which included the reading of manifestos by Arp, Ball, Janco, Huelsenbeck and Tzara, that ended in a near riot. The commotion of the NEW was now very much upon us. 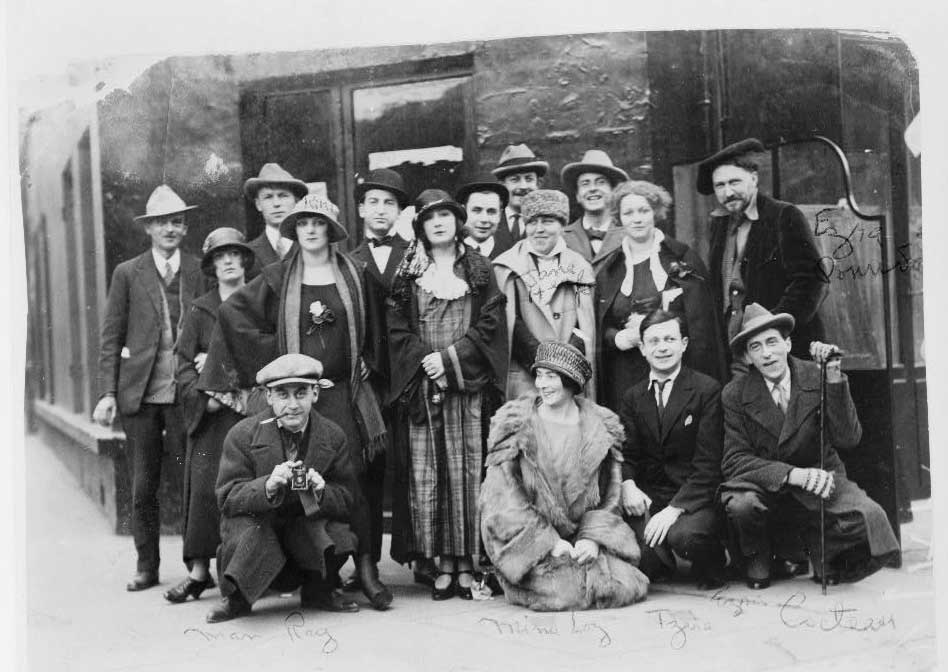