Dead Wake: The Story of the Lusitania

Home » All books » Dead Wake: The Story of the Lusitania

Dead Wake: The Story of the Lusitania by Erik Larson 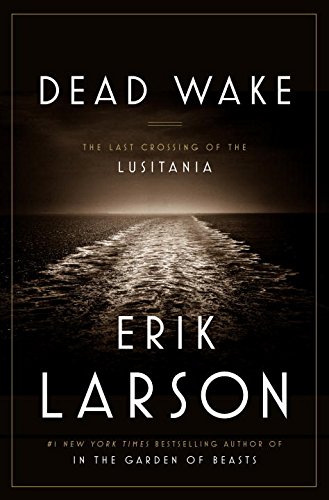 Dead Wake: The Last Crossing of the Lusitania

The wonderful thing about being a book reviewer is having the opportunity to read books before they are published and sharing them with you.

I’ve long been fascinated by the story of the Lusitania and its final voyage and this book is by far the best I have read on the subject. It is incredibly detailed – more so than any other book about the tragedy that I’ve ever come across.

At the end of April in 1915, a German U-boat left its base in the North Sea. Its destination was the war zone sea area that surrounded the British Isles.

The following day, the Lusitania, a passenger ship carrying 1,962 people left New York en route for Liverpool across the Atlantic. The two were to meet a week later in the war zone waters of Southern Ireland.

As a result, the Lusitania would be at the bottom of the ocean and 1,198 people would have lost their lives.

These people were civilians – including women and an unusual number of children. This disaster, which is much more fascinating than that of the Titanic, has been recounted several times but never is such detail and in such a readable form.

Most people know that the Lusitania was torpedoed by a German U-boat and that’s often where their knowledge ends. But this book gets to grips with the personalities of the people on board, the ship’s captain and Walther Schwieger, the young German commander who ordered his crew to fire on the liner.

How could the U-boat torpedo a civilian liner? What was the justification? And what about the people who perished – and those who survived?

Don’t think that you’ll be able to read a few pages of this book and then set it aside for later.

You’ll want to keep reading as the story, which is told in immaculate detail, unfolds. The Lusitania disaster was the coming-together of many decisions. Some of these were large and made at high level, others were minor issues, but they all came together on that sunny afternoon in May 1915.

As the passengers – some of them millionaires, actors, opera singers, celebrities – enjoyed their lunch or their postprandial coffee or cigars …as mothers played with their children … as passengers enjoyed games on the deck … as lovers whispered their secrets plans … the eyes of Walther Schwieger were watching from the U-boat’s periscope. He thought that the liner was too far away and that because of its speed he would never be able to catch it but then the Lusitania’s Captain Turner made a decision that was to change the course of history.

The book was released on 10th March, 2015, just a few weeks before the 100th anniversary of the sinking of the Lusitania.

PLACE YOUR ORDER AT AMAZON