Stop messing about with Creme Eggs. For our sake and Major Cadbury’s 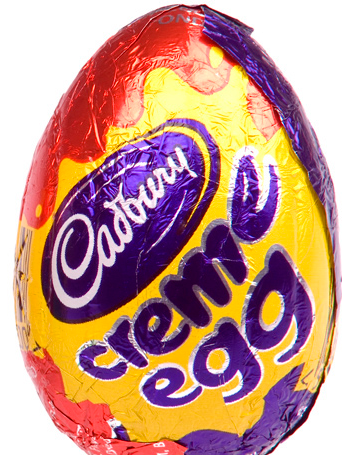 Britain is in revolt. This is nothing to do with politics or any of that nonsense. This is far more important. No, England is outraged by the changes made to Cadbury’s Creme Eggs. I agree wholeheartedly. How can they do this to us?

We have grown up knowing that there is one constant in life. Things change. Fads may come and fashions may go but the one thing we can rely on is the fact that our Cadbury’s Creme Eggs remain the same – just as we remember them from childhood.

Or we could. No longer though. The fabric of British tradition has been ruthlessly ripped apart. Twitter is a-tweet with this appalling news. The American owners of the confectionery company has sneakily and secretly replaced the chocolate with an inferior version.

This means that 12 January, 2015 will forever be remembered by chocolate lovers with sorrow

We will shake our heads in sadness and bafflement for years to come. We will always remember the day when Kraft Foods, who bought our revered company, decided that our creme eggs will henceforth not use proper Dairy Milk chocolate but some vastly inferior substitute that the Guardian, in it’s infinite wisdom, refers to as ‘vomit-inducing’.

What about Major Cadbury?

One hundred years before this inane decision was made, young Cadbury, had just joined the Royal Naval Air Service, the forerunner of the Royal Air Force. Major Cadbury – who eventually became an Air Commodore and was highly decorated – bravely, from his tiny bi-plane, shot down several of the fearsome, huge German Zeppelins that were terrorising the east coast of England. He was, of course, a member of the chocolate family.

Now there is no doubt a strong theory that the Cadbury filled eggs, which were first produced in 1923 by the way, are so named because they are egg-shaped. I have another theory.

Major Cadbury was the son of George who himself was the son of the founder of the Cadbury company. Who is to say that George didn’t produce this confection as a tip-of-the-hat to his heroic son? After all, he was Major Egbert Cadbury. EGGbert.

So, Kraft Foods, not content with changing our creme eggs, you are also negating the bravery of our gallant World War One heroes. Even if my naming theory is nonsense, then bear in mind that the Cadbury’s chocolate factories might have been completely destroyed by those mighty Zeppelins that were shot down by a Cadbury. Then where would you be?

When this sneaky and secretive ploy was discovered, the newspapers in the UK (yes, even the ‘quality’ ones) wrote at length about this abomination. The illustrious BBC arranged a Cadbury’s Creme Egg tasting. They assembled the old style and the interloper eggs and a group of chocolate experts.

The results were unanimous. You don’t need me to tell you what they were. The new chocolate was derided by the experts as being sweeter, having less cocoa solids and it was described as ‘tasteless’ and ‘pasty’.

So what can we do?

I’m sure that someone will start a petition. I wouldn’t be surprised if questions are asked in parliament. But against the high and mighty we-don’t-care-we-just-want-to-cut-costs bosses at Kraft Foods, we have little chance of overthrowing their stupid decision. But there’s one thing….

This probably isn’t even necessary because according to the chocolatiers who took part in the BBC tasting, once you have tried this new chocolate abomination, you will never buy one again. This is good and hits Kraft Foods where it hurts but it’s yet another example of our old traditions that has been forced to bite the dust. Such a shame.

Note: My grandad was in the RNAS in EGGbert Cadbury’s squadron.(Which is why I feel a vague family connection to the late-lamented creme egg). You can read more about this, and my dad’s amazing adventures in Petrol in My Blood .