On March 20th, 2015, it seems that American magazine were tired of waiting the required nine months for the expected royal baby. Not one but two of them reported that Catherine, Duchess of Cambridge, had given birth to a girl in dramatic  circumstances. See the screenshot below from the Daily Mirror, a British newspaper. 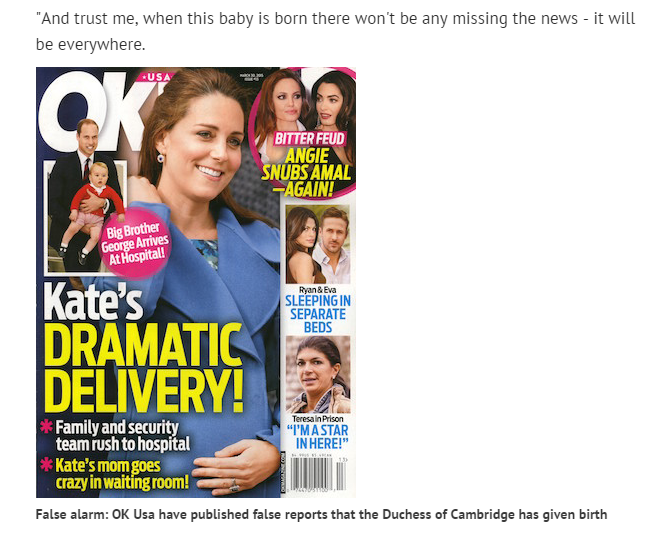 As you can see, it was announced that the baby had been born, that it was a girl and that there was a dramatic operation. Meanwhile, evidently, Catherine’s mother was going crazy in the hospital waiting room. The magazines went onto describe how young Prince George, despite the ‘medical emergency’ and the ‘craziness’ had been allowed into the hospital to greet his new sister.

Needless to say, Kensington Palace has totally dismissed this as utter nonsense.

Of course, this isn’t the first time that American magazines have played scaremonger. THree years before the fictitious baby story, US magazines printed a story saying that Queen Elizabeth was seriously ill and was in her deathbed. They stated that the evil Camilla, the Duchess of Cornwall,was plotting to take over the throne.

Needless to say, none of this happened.

But it’s not the first time that America has branded the somewhat sweet and charming Camilla as the wicked stepmother. There have been plenty of stories about her evil machinations designed to ruin the royal family, to split up the marriage between William and Catherine – or whatever nonsense they care to invent. These stories do nothing to benefit anyone – except of course the magazines themselves who have known from the nineteen forties and fifties that British royalty on their covers sells.

Oh, and don’t forget that the Prince of Wales is evidently a cross-dresser. Prince Charles envies his mother’s clothes, evidently. Why do they print this bunkum? What worries me more, is does anyone actually believe it? The trouble is, that I suspect that they do. You can tell this from some (most)of the comments that are posted by the general public when these stories are translated onto the magazines’ websites. This in turn opens up another round of nonsense comments, many of which will also be believed.

It’s bizarre. There are even ‘experts’ on television propounding about the UK. You can see an example here.

As much as these magazines might say that they are ‘for entertainment only’ there will always be people who believe the nonsense that they write.

On the day the magazines hit the news-stands telling the world about the birth, a very-much-still-pregnant Catherine was at the Brookhill Children’s Centre in Woolwich in London carrying out a royal engagement.