Home » All books » Duck Dynasty and the Women of Duck Commander

You may be familiar with the hit reality show, Duck Dynasty. Even if you’ve never watched an episode, you probably remember hearing some of the fallout from patriarch Phil Robertson’s unabashed comments a year or so ago, very politically incorrect, that almost led to cancellation of the series. Loyal fans spoke up, though, and the producers agreed that Phil would still be featured on the show (a no-brainer decision because the family wouldn’t have done the show without Phil) and the show resumed production with an ever-growing fan base. Now they’re in their eighth season.

What’s so special about Duck Dynasty and “Duck Commander,” the company behind it? The Robertsons base their worldview and their very lives on two things, God and family, and they’re not afraid to speak up about their faith. That’s the first thing that makes them special. The second is the women behind the men of the family. Combine the faith and faithfulness of Miss Kay, Korie, Missy, Jessica, and Lisa Robertson and you really have a force to be reckoned with. These women validate the saying that behind every successful man is a woman, and in this case these are God-fearing, praying women who vocally support their men. 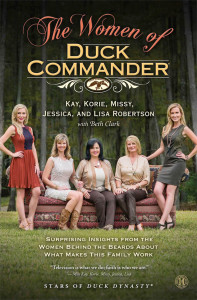 Their book, The Women of Duck Commander: Surprising Insights from the Women Behind the Beards About What Makes This Family Work, was published in April 2014. In it you’ll find a chapter from each of the Robertson women, written from each heart and revealing stories about themselves and their husbands that will give you even more insight into these amazing individuals.

And if you’ve never watched an episode of Duck Dynasty, do yourself a favor and give it a try. You might be surprised at how real, down-to-earth, and relatable this inspiring family can be.

Related Reading: My encounter with Jase Robertson. Or was it Jase?

You might also like: The next generation of amazing Robertson women includes daughter Sadie. She’s an inspiration and a role model for teenage girls who strive to put God first in their lives. Check out some of Sadie’s Live Original line of products, featured at DaySpring.com.