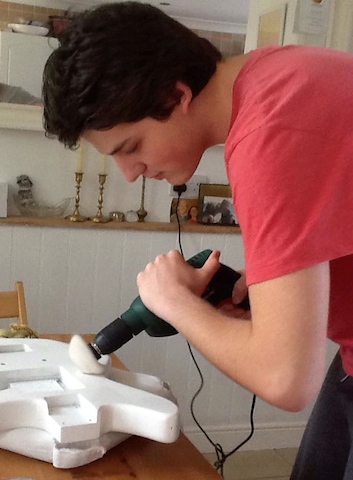 I was given an electric guitar kit for my birthday, which was in February. The fact that I finished in June gives you an idea of how many difficulties I had making it.

I don’t want to put anyone off making a guitar from a kit, because it’s been great fun to do and I have learned so much. I’m just pointing out that how much you already know about woodwork, finishes, and electronics, will determine how long it will take you.

The kit I bought was intermediate to advanced level. There’s a link to it below. The difference between a beginner level and one like mine is that I had to do all the soldering. The beginner’s level kits are about finishing the body and assembling the guitar.

I made lots of mistakes as I went along and here are some lessons that I learned on the way:

Here are some of the techniques we used that worked for us: 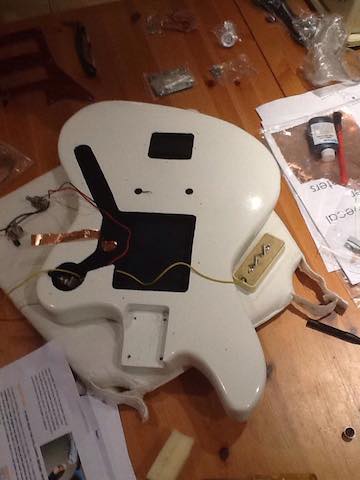 The best thing about making your own guitar, in my opinion, is playing it after it’s finished. You get such a sense of achievement, and a real rush of pride. Also, knowing what’s inside it, and how it is made makes it a really special thing. There were times when I thought it would never come together, but it has turned out to be a really beautiful guitar. I love it.

Plugging it in for the first time is really scary – and it didn’t work the first time, so we had to try to fix the problem by working out where we had gone wrong. It was just a simple mistake – we had wired the jack plug wires the wrong way round. The multi meter helped us work that out – it’s a bit like being a detective.

I got a fantastic feeling of achievement when it finally played. All the problems I had making it vanished from my mind!

I hope I have encouraged you to buy a kit and have a go and that my tips help you.

If you need any advice please leave a comment below and I’ll do my best to point you in the right direction.

Good luck with your guitar. I’m making a Bass next!

This is the kit I bought, but you’ll see that there are many more on Amazon.

If you are not in the UK then I would buy this one:

Here’s some of the gear I used to build my guitar: