Andy Royston looks into the darker side of this newfangled electricity fad.

I beheld a stream of fire issue from an old and beautiful oak . . . and so soon as the dazzling light vanished the oak had disappeared, and nothing remained but a blasted stump. . . . I eagerly inquired of my father the nature and origin of thunder and lightning. He replied, “Electricity.”- Victor Frankenstein 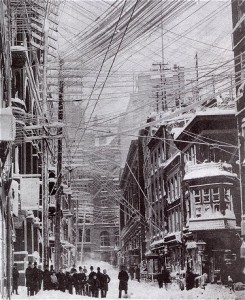 1880, New York City. The metropolis had embraced the new electric technology with enthusiasm. Optimism for this revolutionary energy was growing by the day: a magical, protean force that powered lighting and communications, rapid transit, cooking and heating.

Thomas Edison’s company controlled every segment of the system, from generators and cables to motors and light bulbs. Manhattan was his first big customer; and there was another fortune to be made if other cities signed up too.

But New York streets were increasingly covered a black web of humming overhead wires and the enthusiasm began to wane. The brilliance and cleanliness of electricity was beginning to lose its lustre as competing electric power systems and supply companies fought for business. Electricity and its dangers were beginning to come to the fore, and the image of electricity was further tarnished by the invention of the electric chair.

Buffalo, New York, August 7, 1881. A drunken dock worker sneaked into an arc lighting power plant and grabbed the brush and ground of a large electric dynamo. He died instantly, without a mark being left on his body. Pretty soon, after experiments with stray dogs, a repeatable method of euthanize animals via electricity had emerged.

After a series of botched hangings in the US, a New York State governor set up a commission to find alternative methods of execution. By the end of the decade convicted axe murder William Kemmler went down in history as the first person executed by electric shock. It did not go to plan however, and it took eight minutes for him to die – and the story made gruesome reading in the newspapers.

Bizarrely the commission saw two rival companies –  Edison and Westinghouse –  testifying on behalf of electrocution in ways that advanced his own inventions and tainted the other guy. 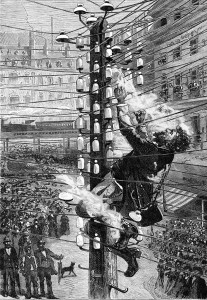 In the spring of 1888 New York newspapers reported a spate of deaths caused by the high voltage AC ‘arc light’ currents. The first that made the news was a 15 year old who, during New York’s ‘great blizzard’, had died when a telegraph  line had been energized by a downed AC line. An office clerk, and then a wire man perished, and the papers went into a frenzy over it.

The public was quick to jump to conclusions. Looking up at the tangle of wires above their heads and wondering just how dangerous they really were.

On October 11, 1889 an incident in downtown Manhattan brought it all to a head. John Feeks, a Western Union lineman grabbed a line that carried a high voltage AC current. Feeks was killed instantly, but his body fell into a tangle of wires, sparking, burning, and smoldering for the better part of an hour while a horrified crowd watched, appalled.

The incident happened right by government offices, so many of the witnesses were city aldermen, who rushed through legislation demanding that the lines be buried underground. New York was plunged into darkness for much of the winter as companies scrambled to rescue their reputations.

Death does not stop at the door, but comes right into the house, and perhaps as you are closing a door or turning on the gas you are killed. New Orleans Times-Picayune

In Britain, where electric lighting was just rolling out, replacing the familiar gas lamps, these stories from America were not helping the public image of this ‘clean’ energy source. 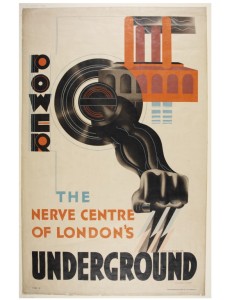 In those early days street lights were providing the bulk of generating demand, which meant that demand peaked in the evenings and dropped right back during the day. No efficient method of storing electricity outside of this peak had been developed, so the new electricity companies were working hard to promote other possibilities of power: factories, traction for trams and trains, cooking, heating and other domestic purposes. Until the demand could be evened out, electricity remained expensive.

Domestic electricity applications featured strongly in the Great Expositions of the time, but the man on the Clapham omnibus was having none of it. Provocative journalists, frustrated electrical engineers and sarcastic members of the gas industry all added their tuppence worth.

The English home had taken to gas relatively late – with many rural homes still relaying on the paraffin lamp or the trusty candle. It households had only just accepted the idea of gas lamps, electricity had a lot of work to do. In this respect the US was ahead of the game – gas power had only really been used in the biggest cities.

England had its own ‘wire panic’ moment, thanks to the death of a young groundsman, William Dimmock , at one of the country’s best known stately homes, Hatfield House. He’d touched an uninsulated electric wire, his situation not helped by the fact that he was wearing wet clothing at the time. Lord Salisbury, Dimmock’s employer was known for his experiments with electric bells, telephones and ran an unorthodox high voltage DC current designed for arc lighting. 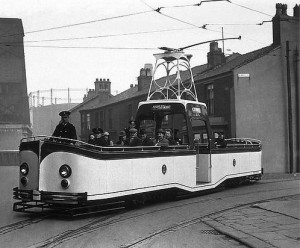 None of these details reached the general public, who by now had bought the idea that electricity was inherently dangerous.

After the inquest, the Journal of Gas Lighting pointed to the inherent dangers of high-tension electricity and the avaricious untrustworthy electrical companies involved. It would not be long, they wrote, before an electrician transmitting a “death-dealing force through an unprotected wire would find reason to repent his criminal recklessness”.

Oh there were stories.

Old ladies who anxiously kept plugs in all the electrical sockets and tightening the light bulbs to prevent the electricity leaking out.

A country house where a private generating set was installed by an owner so apprehensive of the unpredictable powers of electricity that he set a limit of 50 volts.

The only way around these irrational fears was to counter the idea of electricity by selling a more positive image.  Advertisement talked of a miraculous source of energy that would take away all the troubles of the world. Never mind the fact that the first wave of electrical appliances were pretty poorly conceived, and that even in the 1930s many homes had just been wired for lighting only.

Extravagant claims for the luxury of all-electric homes were hardly justified by the appliances themselves, which were badly designed and cheaply made, but that’s a whole other story. 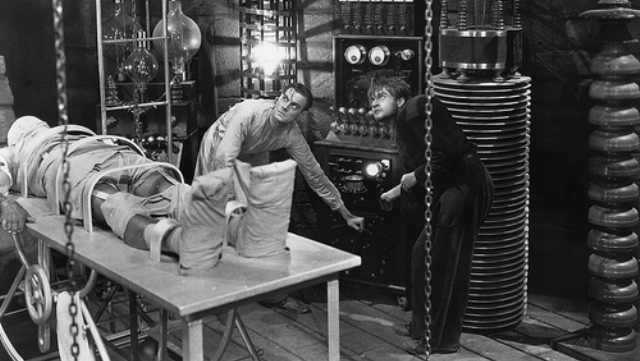 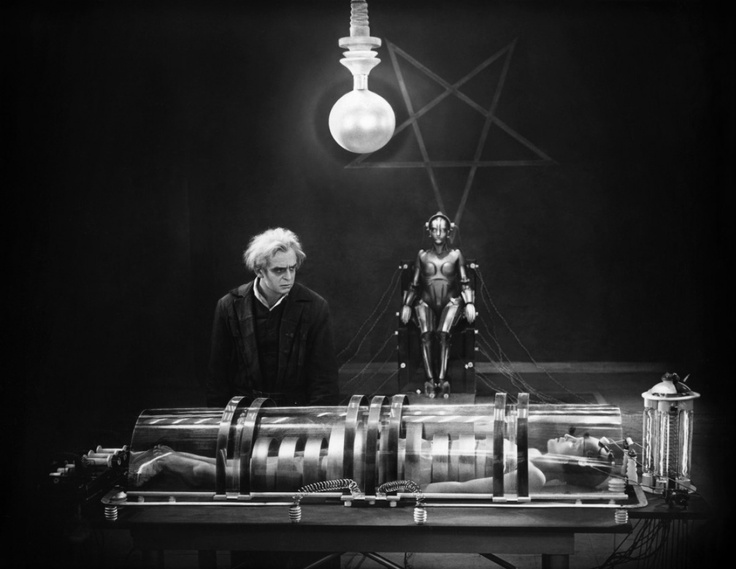