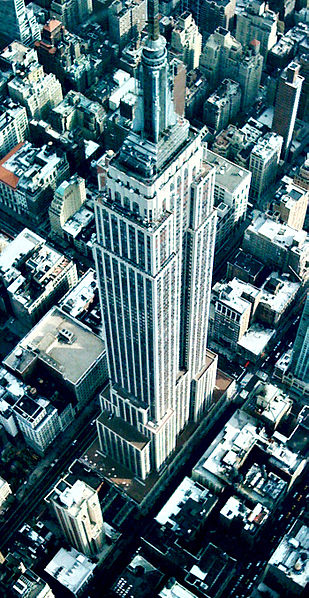 What do you know about the Empire State Building? Here’s a series of weird and wonderful facts.

For the golden anniversary of the building’s opening in 1981, workmen opened the time-capsule that had been buried in its cornerstone. The contents hadn’t stood the test of time. The items within it had rotted away during their fifty years burial.

It should have contained a newspaper dating from September 9th, 1930, coins and currency, plus one hundred and ten photographs of the construction of the building.

On July 28th, 1945, a B-25 bomber was flying over New York. Because of thick fog, it hit the Empire State Building. The area caught fire and in total, fourteen people were killed.

This caused an elevator to plummet from the seventy five storeys to the ground. Inside was the operator, Betty Lou Oliver. She had been burned when the plane hit and rescuers put her in the elevator but the accident had weakened the cables, hence the plummet. She survived.

In 1981, when the original time capsule was found to be empty a replacement was buried in the cornerstone of the building. When the building celebrates its centenary in 2031, it will be opened as part of the celebratory events. Officials claim that this time, it is properly sealed.

Once the construction workers who built the Empire State Building were up on the girders for their shift, they stayed up there until their shift was over. Food and beverages were sent up for them. And oh yes, sanitary facilities were provided up there too. (Good to know!)

On April 24th, 1986, a guard saw two men perched on a fence on the eighty sixth observatory floor. He told them to get down and they did – by parachute. Michael McCarthy and Alastair Boyd, both from London and in their twenties, glided 1,015 feet down to the safety of Fifth Avenue.

The most famous portrayal of the building was in the film King Kong, when the giant gorilla seemed to scale the side of the building holding actress Fay Wray in his hand. When the actress died aged ninety six in 2004, the building’s lights were extinguished for fifteen minutes in tribute.

In 1938, a group of dancers from the Congo, Shogola Olaba, were having an unsuccessful American tour. Deciding that this was due to evil spirits they  performed a ceremony at the top of the Empire State Building to be rid of them.