The Curious Life and Death of Empress Elisabeth

Home » All society » The Curious Life and Death of Empress Elisabeth

Who was Empress Elisabeth? 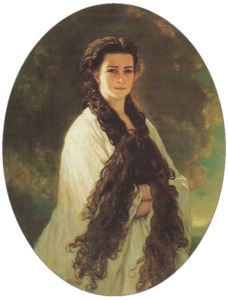 The Curious Life and Death of Empress Elisabeth.

Elisabeth, or Sisi as she was known, wasn’t destined to be the Empress of Austria but that became her role, nevertheless. She was born into the royal family of Bavaria – her parents were both related to the upper-crust of Europe.

It was the fact that her mother, Ludovika, was the sister of Sophie, the mother of Emperor Franz Joseph that sealed her fate. But she was never supposed to marry him.

Elisabeth lived a curious and often tragic life and ultimately came to a violent end herself.

When she was just fifteen, the twenty-two year old Franz Joseph was looking for a wife. Or at least, his dominating mother was hunting for a bride for him.

Various princesses were considered but Sophie decided for political (and familial) reasons that her son should marry one of his cousins. But Elisabeth wasn’t the one who was selected.

Sophie decided that the perfect match was, in fact, Elisabeth’s older sister, Helene.

Helene was summoned to court to meet her potential husband and fifteen year old Elisabeth – and their mother – accompanied her. But Helene wasn’t happy about the arrangement.

Helene was a timid girl and had rather hoped that she would spend her life as a nun. She did not impress Franz Joseph or his mother, Princess Sophie.

But there was an almost immediate attraction between Franz Joseph and the younger sister, Elisabeth. The two were cousins and a bond was soon formed. Reluctantly, Princess Sophie allowed her son to marry Elisabeth. The bride was just sixteen years old. But her life was dominated by her mother-in-law.

When Elisabeth had her children – the first being born only ten months after her wedding –  Sophie insisted on taking over their upbringing. And because her first two children were girls, she was ridiculed by her mother-in-law who was desperate for a male heir to the title.

Within this confining atmosphere, Elisabeth became self-absorbed. She started to become obsessed with her body, her hair and her general appearance and undertook beauty regimes that seem bizarre to us today. For example:

Elisabeth and Franz Joseph’s third child was indeed a son. As with the previous children, Rudolf was whisked away from her to have his education and upbringing controlled by Sophie, Elisabeth’s fearsome mother-in-law.

When reaching adulthood, the heir married well and the couple had a daughter. But the marriage wasn’t a happy one. As the couple began to drift apart and go their own ways, Rudolf amused himself with other women. There was one in particular who at seventeen years old, was thirteen years younger than he was. The couple were staying at one of Rudolf’s properties, the Mayerling Hunting Lodge, when both were mysteriously killed. It was believed to be a suicide pact but to this day, it is not fully known what the truth was.

Elisabeth, rather like Queen Victoria, wore black for the rest of her life.

The death of Elisabeth

The Lonely Empress: Elizabeth of Austria

Elisabeth devoted herself to travel and to learning. At sixty years of age, she was in Geneva and decided to move on by steamship.

She was travelling incognito and she and a  lady in waiting walked briskly along the promenade towards the vessel. As they did so, a man lunged forward and stabbed Elisabeth.

No-one quite realised what had happened.

She managed to make a few more steps and board the ship but lost consciousness and her lady in waiting and a nurse who was on board discovered her knife wounds.

There was no hope and she died shortly afterwards.

The man who killed her was an Italian anarchist who said: