The childhood of Eric Clapton. 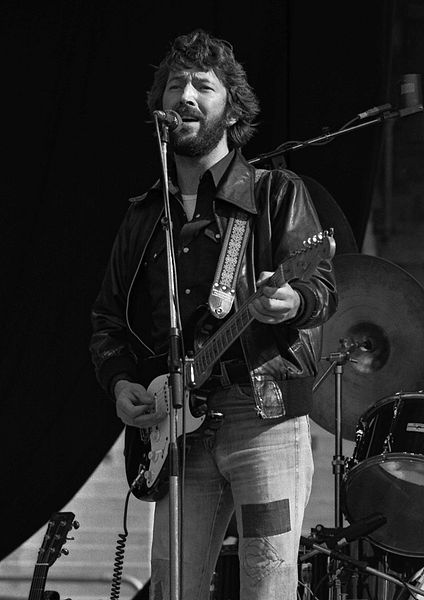 Eric Clapton is a grandfather now but what about his own early days and his childhood? It’s all rather complicated. Various websites will tell you – seemingly with authority – who Clapton’s father was but in his autobiography, he claims he wasn’t sure.

He says he was never convinced that the man who was purported to be his biological father really was.

In many ways, it’s a typical story of its time.

He was born in  Ripley in Surrey which is now a suburb but at the time of his childhood was a tiny village. His mum and dad were called Rose and Jack Clapp. Or at least, that’s what he thought until he was about six or seven years old.

By that age, he started to get the feeling that he was treated differently to the others in the family. Rose had  six sisters and two brothers and the extended family would often get together.

But Eric reasoned that because of the whispers and the glances he received from his aunts, there was something amiss.

He was slowly coming to realise that the whispers and secrets were about him when he heard one if his aunts ask ‘have you heard from his mum?’ That’s when he realised that Rose and Jack were not his parents but his grandparents.

Eventually he made sense of the complicated story.

Rose, his grandmother, had been married before she met Jack. Her husband was an upper class sort of chap called Rex Clapton. They had married in 1927 and had two children, Adrian and Patricia. Rex’s family were much opposed to the marriage because they thought Rex was marrying beneath him. But they were happy. Three years after their daughter Patricia was born, Rex died of consumption. The couple had only been married for five years.

Rose was distraught and returned to her home village of Ripley with Adrian and Patricia. She had no interest in other men but Jack Clapp was determined and courted her for several years.Eventually they were married – in 1942.

Jack now had a wife and two stepchildren. It was wartime and like so many rural English towns and villages there were airmen stationed nearby from the United States and Canada. When she was fifteen, Patricia met one of these airmen, a Canadian named Edward Fryer. He was playing the piano at a dance she attended.

It’s easy to imagine the outcome. Fifteen year old Patricia found she was pregnant and that Fryer was a married man. She turned to Rose and Jack,her mother and stepfather, to help her. She gave birth to the baby, Eric, in secret, in the back bedroom of  her parents’ house on March, 30th, 1945. Only Jack and Rose knew about the birth. No outsiders were involved.

Once Eric had turned one year old, his mother Patricia left the area and the boy was brought up by his grandparents, believing them to be his mum and dad. He was very fond of them both and in his autobiography, speaks warmly and fondly about them.

But at the time, he realised that he was a secret, a stigma. Illegitimacy wasn’t spoken about in those days but as a boy, he began to be aware that he had brought shame on his family simply by being born. Now, he is aware that his grandmother, stepfather and aunts and uncles really didn’t know what to do for the best about the illegitimate boy. They didn’t know how to handle the situation but simply did the best they could. But at the time, his secret made him withdraw into himself but in general his boyhood was a happy one.

The reappearance of Patricia Clapton

In 1954, when Eric was nine, he was taken to Southampton. His mother Patricia had married a Canadian soldier called Frank MacDonald, moved abroad but was now returning. She had her two Canadian children with her. He saw her come down the gangplank – a very glamourous woman with auburn hair.  Patricia, Rose, Jack and Eric of course knew by now that the boy knew the truth but nothing was said.

This went on for days until one evening when he said to Patricia ‘can I call you mummy now?’

There was incredible tension in the room.Rose and Jack didn’t say a word and eventually Patricia spoke:

“I think it’s best, after all they’ve done for you, that you go on calling your grandparents mum and dad”.

She said it in a kindly way but he was too young to really grasp what was going on. He had expected a grand reunion with his mother. He felt totally rejected. Patricia stayed with the family in Ripley for a year and was publicly known as his sister. Her children, because they were ‘exotic’ Canadians, were something of a novelty in the village and given the best of treatment. Again, Eric felt rejected and inferior to his half brother and sister. One day, he shouted at Patricia:

Before long, she did.

Many years later a Canadian journalist decided to trace the biological father of the now-famous Eric Clapton. He discovered that Edward Fryer had died in 1985. Eric tried to investigate on his own too but the trail was cold. Throughout his adult life,if ever he was asked about his father, his attitude had been ‘I don’t want to know’ and now it was too late.

Eric had a son in 1986. When the boy was four and a half years old he fell from the window of a 53rd floor apartment building and died. Eric wrote the song My Father’s Eyes. He says that in the song he tried to describe the parallel between looking into his son’s eyes and seeing the eyes of the father he had never met.