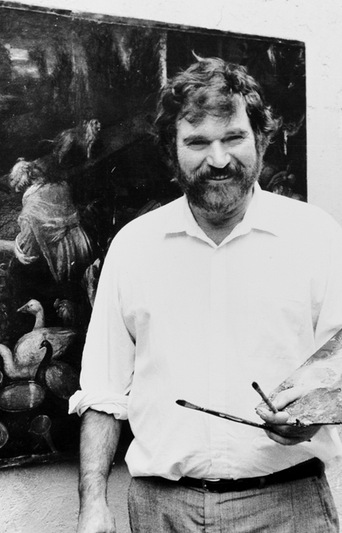 On January 8th, 1996,  English art forger Eric Hebborn was found in an alley in Rome. He was unconscious and had been beaten about the had by a blunt instrument. Hebborn had been living in the area since the nineteen sixties when he and his then lover, Graham Smith, had opened a gallery.

He survived for days after the brutal attack but despite the efforts of the doctors, he succumbed on January 11th.  He was sixty one.

It was apparent when he was still young that he had considerable artistic talent but like fellow forger Tom Keating felt that his work was under appreciated and realised he was not going to make a good living. Like many artists, he started to work as picture restorer when he was a young man.

Having done this sort of work myself, I can appreciate the skills that picture restorers develop. Quite legitimately, restorers are often called upon to repaint sections of work when the canvas or the surface has been damaged. Less legitimately, but not actually illegal, is the practice of enhancing lesser works.

For example, an art dealer might have a seascape that is well crafted but not quite as attractive as it could be to a potential buyer. So  picture restorer might be called upon to add  galleon in full sail. This will make the painting far more saleable. Sometimes a gloomy portrait can be improved by adding jewellery or a lace collar. A painting of a horse might be more attractive with a rider added, a boring landscape can be made more valuable by the addition of  rural cottage or a pair of peasants.

Art and antique dealers – just like car dealers – sometimes take lesser work in part-exchange when selling a work. Just as car dealers recondition vehicles for resale, art dealers might do the same with lower value paintings. This means that the picture restorer soon finds that he or she becomes skilled at reproducing the style of multiple artists. And this can be a valuable skill…..

Sometimes a restorer will be given an old canvas with a truly dreadful painting on it and be asked by the dealer to either make the existing painting saleable or create a new one on the old canvas in the style of a certain artist. And again, there is nothing illegal about creating  painting ‘in the style of’ – students and apprentices have been doing that for hundreds of years.  What is illegal though it to use the artist’s signature, create a provenance for the artwork and pass it off as original.

Eric Hebborn soon realised that the works he was adapting or creating were making a lot of money for his dealer clients. Why not cut out the middleman? Hebborn went to live in Italy with Graham and claimed to have created over thousand fakes. These were sent to London galleries. But in 1978 one of these, the Colnaghi Gallery, became suspicious. Six years later, Hebborn confessed.

Like Tom Keating, he was unrepentant. The art world was notoriously tricky. Art dealers, said Hebborn, were more concerned with making money than verifying a painting’s origins. Art historians and curators, he went on, were more concerned with their career paths or being honoured. He pointed out that most artists make little money in their lifetimes whereas art dealers, scholars and historians invariably do.

The murder of Eric Hebborn

It was reported that he had been to a local bar where he had enjoyed couple of glasses of wine. The owner of the bar said that Hebborn was alone although other witnesses said he had been seen that evening in the company of another man. It was also said that when he was taken to hospital, the staff there assumed that he had passed out drunk and left him alone to sober up,not realising that he had a head injury.

After Hebborn had died, a fellow artist and friend had gone to Hebborn’s home and found that it had been ransacked.

The murder was never solved. There were those who claimed that the police had not investigated the murder or even that they had covered up the details they had because someone well-known, or someone extremely rich,  had been involved. Other say that one of Hebborn’s gay lovers (or ex-lovers or would-be lovers) was the murderer. The fact that his home was ransacked seems suggestive – was this someone looking for details about his forgeries? Or trying to conceal details? We may never know.

Interestingly, several of Hebborn’s paintings were sold at auction in October 2014. The BBC reported: