Who Was Evelyn Nesbit?

Home » Featured » Who Was Evelyn Nesbit?

Who was Evelyn Nesbit? 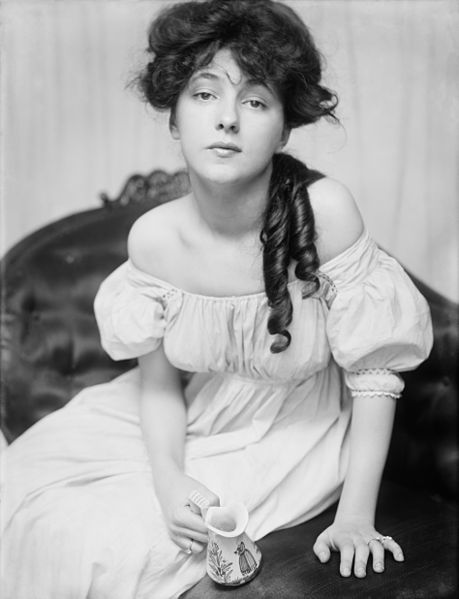 When Evelyn Nesbit died at the ripe old age of eighty two, she had been in obscurity for years. But at one time, her name was well-known on Broadway and in the theatres of Europe.

She became even more well known in 1906 when,openly and in public, her husband shot her lover dead in a glittering supper club in Manhattan.

Evelyn was only twenty at the time and had met her much older lover, Stanford White, when she was still a teenager.

Although Evelyn had been born into a reasonably affluent family, the family fortunes changed when she was just eleven years old and her father died.

All that the family possessed had to be sold to pay debts. Her mother struggled to bring up Evelyn and her younger brother.

When they moved to Philadelphia however, their fortunes began to change when the noe fourteen years old girl was asked by an artist to pose. This led to further modelling work and her career took off even further when the family moved to New York.

There Evelyn was in demand for painters but also from photographers. Photography was just emerging as an advertising medium and Evelyn was often posing for magazine covers and for advertising beauty products.

She has been referred to as ‘the first supermodel’.

Before long, she was asked to appear in a Broadway show and her name was constantly in newspapers and magazines. She moved in a social circle of the wealthy, socialites and the famous.

Thanks to this, she met the architect Stanford White. He was almost thirty years older than Evelyn and at first, his attentions were avuncular. But the pair soon became lovers. This lasted for a year, at which time she met Harry Thaw.

Harry was the heir to a multi million dollar fortune. He was relentless in his pursuit of Evelyn, to the extent of taking her and her mother on a trip to Europe. Eventually he was successful in his quest and Evelyn married him. But he was obsessed by the knowledge of her previous relationship with Stanford White.

On June 25th 1906, Thaw and Evelyn attended a theatre performance at the rooftop club in Madison Square Garden. When the show was almost over, Stanford White arrived. Harry Thaw approached him and shot him at almost point blank range. White died instantly.

This led to what was known as ‘the trial of the century’.

In 1906, times were still Victorian in many ways. Because this trial was so closely related to the morals of White and Evelyn, the jury were sequestered. Evelyn’s mother was accused of being the instigator of the relationship and prostituting her daughter to Stanford White. Thaw meanwhile, was advised to plead temporary insanity.

Thaw’s family did indeed have a streak of insanity. But his mother wanted to play this down. It’s thought that she paid Evelyn handsomely to ‘perform’ in the witness box, where she portrayed White as an evil despoiler of young girls. Tee court believed the temporary insanity plea.

This meant that he was found not guilty of the murder but confined to an asylum.

In a curious side note, early editions of an evening newspaper reported in 1922 that Evelyn Nesbit’s body had been found in the Potomac River.  Curiously, it was encased in ice. A policeman and several of the newspaper reported who rushed to the scene recognised and identified her. They were wrong. 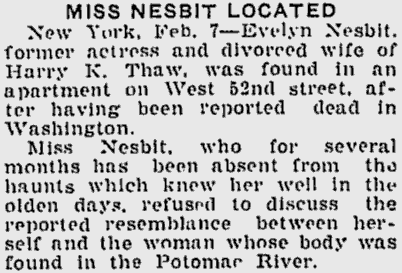 There’s more to this than meets the eye.

You can tell how old the film is – that’s Joan Collins playing Evelyn, but the popularity of this story means that it’s still available. See below.