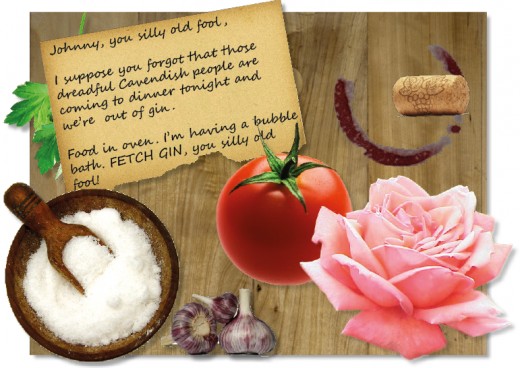 Fanny Cradock was known as the first TV celebrity chef.

She appeared on her show along with her ‘husband’, Johnny.

Although he was her real-life partner, they were not married – a fact that could have scandalised some viewers when their show started in 1955.

In fact, Fanny had first been married at the age of seventeen – to an RAF pilot.

Accounts vary regarding the exact time but he was killed shortly afterwards and Fanny was left a widow.

She soon embarked upon a new relationship with an engineer named Arthur Chapman. The discovery that she was pregnant brought about another marriage.

Within a year, Fanny knew that he was not the man for her and she was not cut out to be his wife but Arthur had, by this time. converted to Catholicism and refuse to even think about the idea of divorce. Fanny packed her bags and left him anyway.

She moved on to a wealthy playboy racing driver who was a little younger than she was. His name was Greg Holden-Dye and the couple decided to marry – despite the fact that Fanny was still married elsewhere. She used the rather inexact and haphazard way of trying to discover her marital status by advertising her engagement in several newspapers. Because Arthur didn’t respond, she assumed that he was more than likely dead (which was a bit of wishful thinking, no doubt) and she married her playboy just after the outbreak of  the Second World War.

She was disabused of her supposed widowhood shortly afterwards when she came across Arthur, her ‘late’ husband, as large as life in London. However, by this time she was unconcerned because she had already tired of her playboy (maybe he didn’t have as much money as she had suspected) and decided to move on. She later told the world that this had nothing to do with it and that she’d discovered that her new husband was in fact gay. They had only been married for a few weeks when she announced that she was leaving him for Johnny Cradock.

Johnny was,you won’t be surprised to hear, was already married with four children but soon dispensed with them to move in with Fanny. Having discovered that her previous husband Arthur was alive after all, she legally changed her name (in 1942) to Cradock and this time didn’t attempt another bigamous marriage. But the relationship was to last this time.

After more than thirty years of unwedded bliss, Fanny read a newspaper report about the death of her second husband, Arthur. Now she was free to marry. At sixty eight years old (but claiming on the marriage certificate that she was a mere fifty five) she married Johnny.

Except this was another bigamous marriage. Arthur Chapman isn’t an uncommon name and the obituary she had read had been that of another man.

READ MORE ABOUT FANNY CRADOCK – AND THE FAMOUS DOUGHNUTS 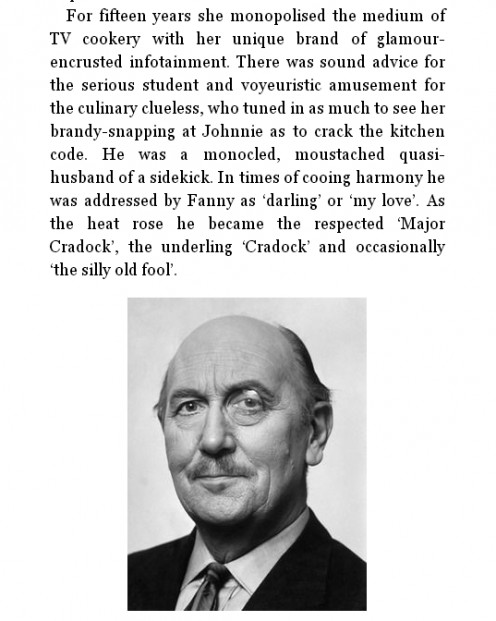