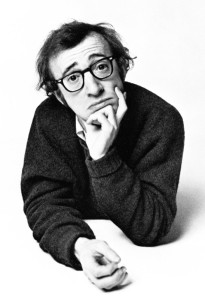 “Like Preston Sturges and Billy Wilder before him, Woody Allen is a writer-director with a distinctive voice and a satirical thrust. I appreciate his tone, which is bitter-sweet and self-conscious. At their best his films reflect on the process of cinematic storytelling” David Evanier : PBS Interview

Woody Allen emerged into moviemaking just after American Jews – who had pretty much build the American movie industry – emerged from half a century of invisibility on the silver screen. Jewish protagonists in movies like Blazing Saddles, Death of a Salesman and The Graduate were under the radar. But things were at last about to change. Woody Allen, in the words of his biographer David Evanier, “would be the very brash recipient of the new freedom.”

What was refreshing about Allen’s comedy is that he appeared to be the real deal. He didn’t look superior to the audience as a stand-up. He was wrinkled and self-deprecating. There was instantly an assumption that he was telling you something personal and autobiographical.

Sure, there were big Jewish comedy stars who didn’t put their ethnicity front and center – Groucho Marx, Jack Benny, George Burns and Eddie Cantor come to mind. And there were the Borscht Belt comedians who had been entertaining the New York community for years. Woody turned up after a new wave of Jewish New York comics led by Lenny Bruce. His was a free-form stream of consciousness. Ironic, insolent black humor and social satire.

“Individuality was now valued over sameness, rebelliousness over conformity. The exotic, what was different, was now appealing and desirable… The saccharine view of America was tossed aside in favor of reality and authenticity. Ironically Woody himself was drawn to the old vision of America but was the embodiment of the new.” David Evanier – Woody, the Biography

The movie Radio Days is a beautifully nostalgic look at Woody Allen’s childhood in the suberb of Flatbush, New York. Set in the homes and streets of South Brooklyn and Long Beach Radio Days is an portrayal of 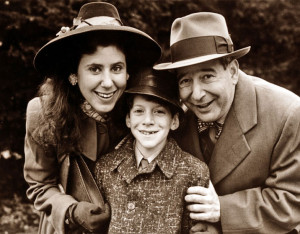 family life in the era when radio ruled. Most of the movie is seen from a kid’s point of view and adult issues (the imminence of war, the spectre of Nazi Germany) are only obliquely touched upon.

Woody Allen had started the film with the idea of recreating the songs and the radio plays of his childhood, and he does this quite brilliantly. His family appear chaotic and vulgar at times, but the overall feeling is nostalgic, rose-tinted and at times hilarious.  It is set, not in Coney Island where Woody grew up, but a little further east in the Rockaways, near the old (soon to be demolished) Playland amusement park. 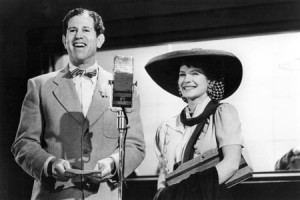 The impending clouds of World War Two are a part of the story too. Kids collected scrap iron for the war effort, and cinema newsreels keep everyone on tenterhooks. There’s a scene when the kids go down to nearby Coney Island beach – just a nickel on the trolley car – to watch out for Nazi submarines. This wasn’t fanciful – there really were Nazis out there, as witnessed by the capture of four German spies on nearby Atlantic Beach, on a mission to sabotage power plants and railroad passes. Their plan was exposed when one of the four encountered a coastguardsman along the dunes, and a man-hunt swiftly followed.

The movie has its critics. Jonathan Rosanbaum notes that the movie does a lot of cribbing from other sources (from Fellini and Trufault to Monty Python) and basic things like character aging are ignored. He also laments the lack of a radio vantage point or conceptual base, and reckons that Allen simply offers a few period touchstones and some pop tunes of the era rather than delve into deeper themes. 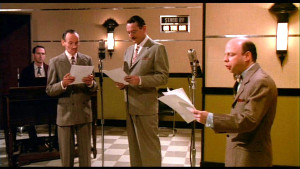 Woody Allen’s love of escapist movies informs the warm nostalgia that lights up the movie. Old school friends did make a note of how much Allen mythologises his childhood losing a grittiness and authenticity in the process. Woody had visited the movie house around the corner almost daily as a kid, so the romanticism was second nature and you see this not only in Radio Days but The Purple Rose of Cairo, Alice and Play It Again, Sam.

“You would leave your poor house behind and all your problems with school and family and you would go into the cinema and they would have penthouses and white telephones and the women were lovely and the men always had an appropriate witticism to say and things were funny, but they always turned out well and the heroes were genuine heroes.” Woody Allen 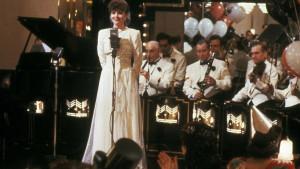 Allen also expressed the thought that those early experiences in the movie houses had a crushing experience in him and his buddies well into their lives. “When you sat in those movie theaters,” he said “you thought it was real.”

My own parents also grew up in a poor neighborhood and lived for the glamour of the movies, but  I’m not sure that they would concur. In times of trouble escapism thrives, and movie goers are fully aware of the distinction between fantasy and reality. 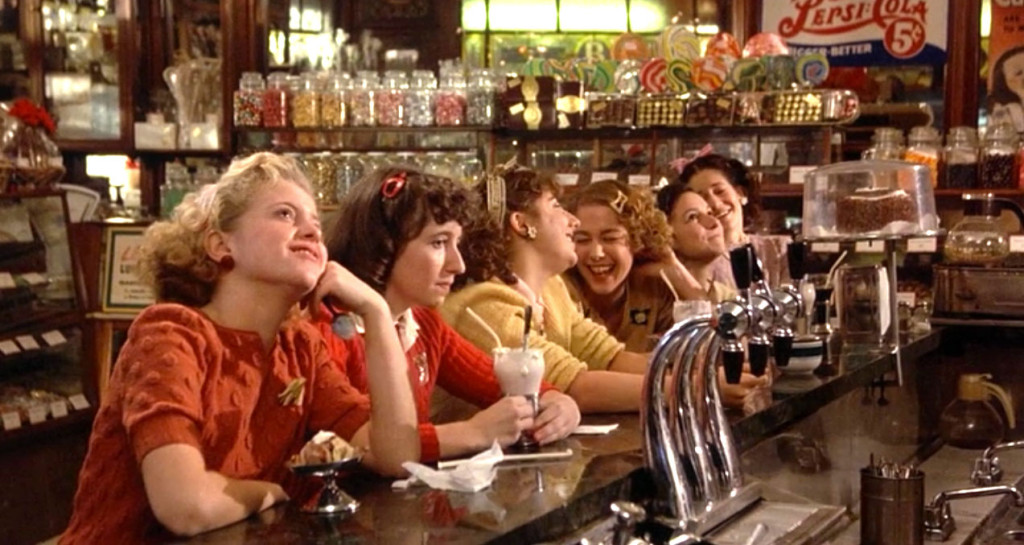 Allen’s experiences of the radio days comes partly from his early professional life in New York City. His first proper job was as a comedy writer for an ad agency, moving quickly on to NBC as a staff writer for the Colgate Comedy Hour, the channels first TV variety showcase. This meant working around Times Square back when it really was a world of showbix innocence, a vibrant showbiz world that he portrays in the rooftop scenes of the Radio Days movie.

Allen in later days has been asked about his incredible luck for making people laugh. He said “I’ve parlayed that gift into an entire career. If I hadn’t had that I’d be waiting tables or selling insurance.” “I think of ‘Radio Days’ basically as a cartoon,” Allen said. “If you look at my mother, my Uncle Abe, my schoolteacher, my grandparents, they were supposed to be cartoon exaggerations of what my real-life people were like.”

Narrator (Final scene) “I never forgot that New Year’s Eve when Aunt Bea awakened me to watch 1944 come in. I’ve never forgotten any of those people or any of the voices we would hear on the radio. Though the truth is, with the passing of each New Year’s Eve, those voices do seem to grow dimmer and dimmer.” 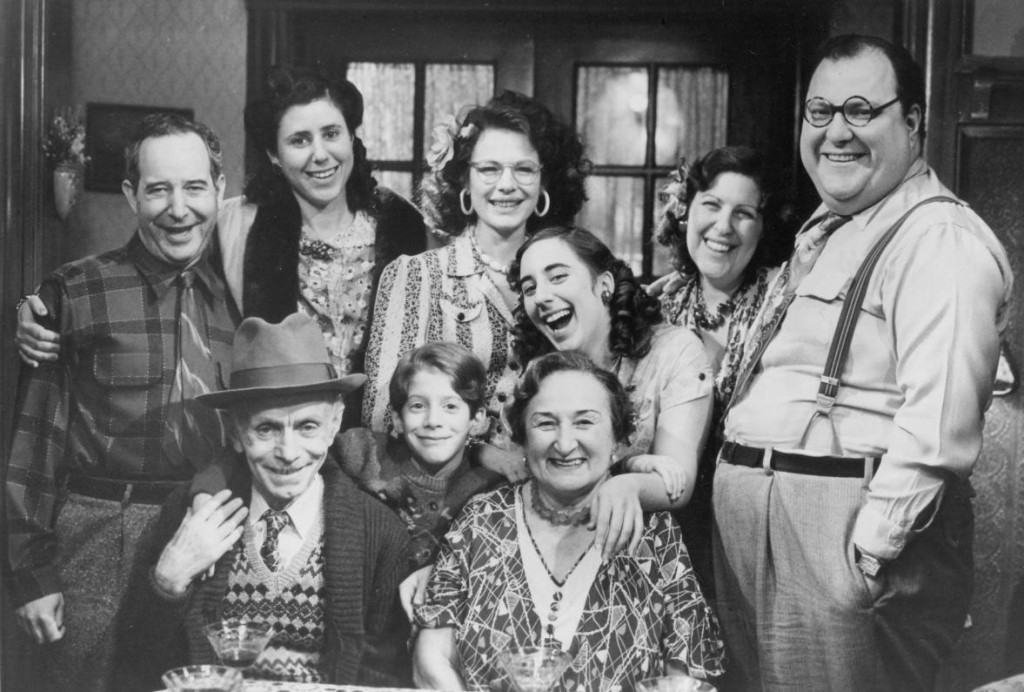 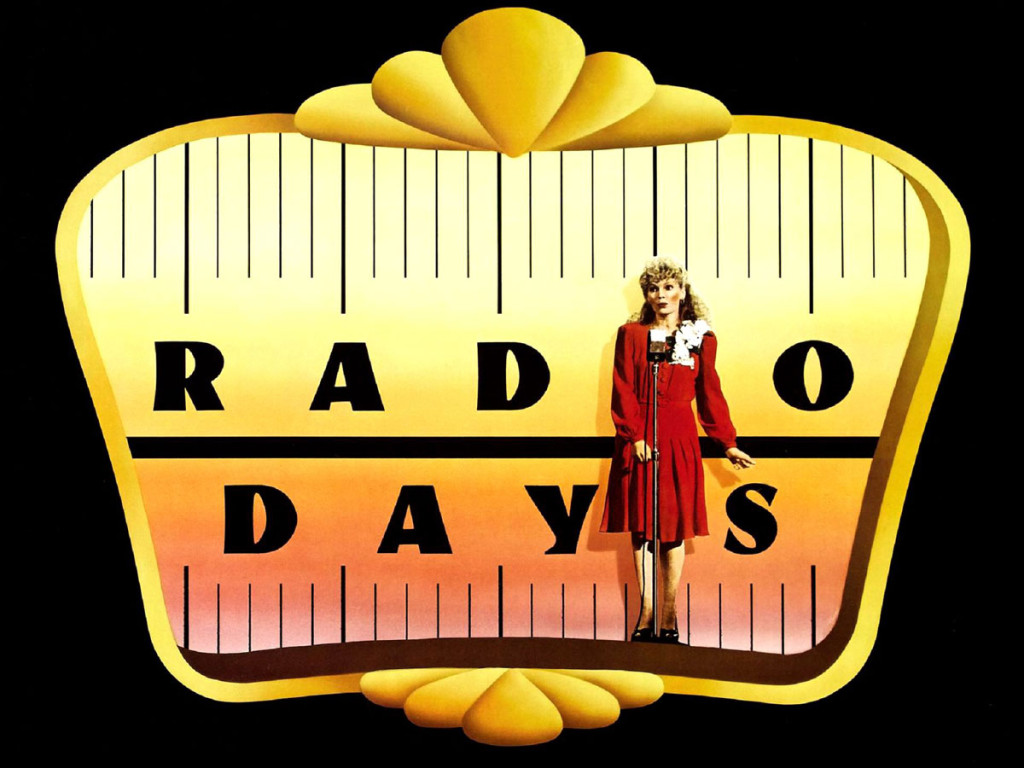