It’s a sign of how seriously I took popular music as a teenager that I would get so annoyed by a silly love song.

A case in point was David Bowie’s smash hit in 1983 China Girl, which followed his Lets Dance song up the pop charts across the globe. Quite why I got so hot under the collar about it is because it was a song that – in my mind at least – had real depth and meaning, and Bowie had the temerity to turn it into a [shock] hit single!

So what was wrong with it.

Not only did David Bowie write the song, he also played and produced most of the instruments when he originally recorded it; on Iggy Pop’s dark masterpiece The Idiot. Bowie therefore had a stake in the song, its meaning and its nuances. So if he wanted to dust it off, polish it to within an inch of its life and re-invent it as an ode to his relationship with model Neeling Ng, perfectly fine and dandy. Go right ahead, fella, knock yourself out…

And boy he did.

All of Let’s Dance is co-produced with one of my heroes, Nile Rodgers, who was largely responsible for the lush and shiny sound of Bowie’s commercial breakthrough album. On this track Bowie also enlisted blues legend Stevie Ray Vaughan for the guitar solo and created a magnificently MTV-friendly video directed by David Mallet, who later worked with the cream of video royalty including Madonna, U2, Tina Turner and Queen. 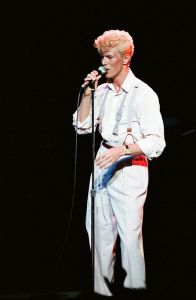 From the start, it’s a bit of a musical irritant. A clichéd musical plinky-plonk  told you – if you didn’t know by now – that this song had a Chinese theme to it. It’s called ‘China Girl’. Geddit?  But just to reinforce it there’s that “oh my God not AGAIN” musical trope, that stereotypical oriental riff (it would be pushing it to call it a leitmotif) that’s been around as long as the blues.

That alone is enough to condemn it to the musical trash can.

You’d think that an endless parade of proto-cliche like Carl Douglas’ Kung Fu Fighting, Walt Disney’s We are Siamese and Everybody Wants to be a Cat, would have worn the riff out. From kids TV cartoons like hong Kong Phooey back to Hollywood’s pan-faced Chinee villains you’d think it would have been consigned to culural history. It’s not that it’s especially racist or anything. It’s just so old and overdone.

So really, what was wrong with it?

To me China Girl was just like another song that Bowie co-wrote, and then later caramelized –  Tonight. I’d read so much more meaning into the song due to Iggy Pop’s abrasive take on it half a decade earlier I was genuinely offended by Bowie’s trite take on it all. This was a meaningful expression of substance dependence and self-medication that Bowie turned into a pop song about shagging. 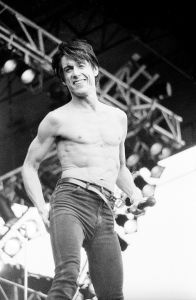 Surely Iggy’s lyrics were about addiction and the seductive force of the drug heroin. Surely China Girl was one of the great metaphorical songs about narcotic dependence.

Iggy’s talking to the drug, and the drug is talking to him. Like The Stranglers Golden Brown, Jesus and Mary Chain’s Just Like Honey, Fleetwood Mac’s Gold Dust Woman or Lou Reed’s Perfect Day there’s hidden references. Right?  China Girl is a euphemism for smack addiction not an ode to some pretty Chinese girl. Right?

Writer Paul Trynka, who has published in depth biographies of both Iggy Pop and David Bowie says that it refers to a passionate affair Iggy had with a Vietnames-born woman during the recording of The Idiot. She was indeed beautiful and seductive. And just like Bowie’s version and that superficially sexy video – Bowie and his beau romping in the waves like Deborah Kerr and Burt Lancaster in some 50s movie – is indeed just a love song.

I was just some over-thinking teen putting way more meaning into a song that was ever meant by the artist.