Home » All entertainment » Forty Years Young – Anarchy in the UK 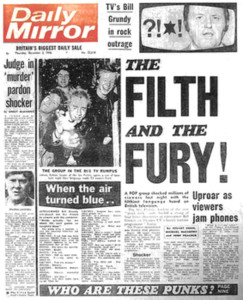 It was forty years ago this month that the Sex Pistols, a wild-eyed punk rock band from London, made the news headlines.

Seriously, folks, it must have been a slow news day.

I was fifteen years old, delivering newspapers in a small mining village in South Yorkshire, and there they were on the front page. The Sex Pistols. Fidel Castro took over as Cuban leader in that day, but, no, we were told to be outraged at the naughty words of a British punk band on some local (London) TV show.

There it all was, splashed across every paper I delivered.

Unusually for a school kid in rural South Yorkshire I did know who these people were. I’d been reading about the Sex Pistols since the late summer, as the music magazines I read avidly had been reviewing their shows for months. I also was the kind of kid with a transistor radio stuck to my lug’ole and had heard their debut single ‘Anarchy In The UK’ on the pirate station, Radio Luxembourg so I knew that inviting these boys onto a live chat show and plying them with free adult beverages might not have been a sensible move.

Nothing about the Sex Pistols was in the least bit sensible. Looking back they were a bunch of teenage gobshites who happened to have formed a rock band, mashing up the visuals of glam rock and comic books while they were still working out which way was up. 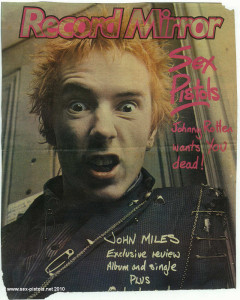 The music was exciting – riffs nicked from Iggy Pop and Alice Cooper, and the stagecraft from eccentric pub rockers like Ian Dury and Eddie and the Hot Rods. And their lyrics were hilarious! It was the Beano’s Bash Street Kids picking up punchlines from the tabloid newspapers. Nothing to be taken seriously. And yet there they were on the front page, pushing the real news about.

Anarchy In The UK released on 26th November 1976, was just larking around. Good old British sarky. Nothing that the Sex Pistols wrote about was in the least bit specific – leave that to The Clash – and that was probably the reason that they caught the mood so well. Maybe it was because bands were supposed to write about giant hogweeds and bohemian rhapsodies, not bring touchy subjects as the MPLA (Movimento Popular de Libertação de Angola) and the Northern Irish Troubles onto our radiograms. 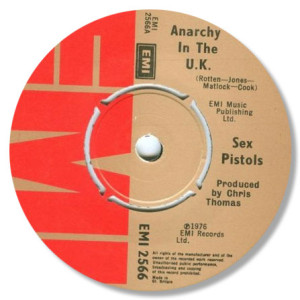 Suddenly at school I knew what I was talking about. I could scoff at the Pistols antics, and talk about Patti Smith and The Ramones, and rave about The Damned’s New Rose, which had been released, oh, a whole two weeks ago. I’d already developed the habit of staying up late with a cheap cassette recorder to tape the late night radio shows, so I could play Anarchy In The UK again and again.

I couldn’t actually buy it as their record label, EMI, had developed a case of corporate cold feet and withdrawn the record from sale. Even as a fifteen year old I couldn’t understand this decision, as the publicity was enormous. Front page news.

Today Lydon denies all intent but he was deliberately using inflammatory imagery. The word Antichrist, even in 1976, the word carried a clear threat of apocalypse… The ringing phrases of Anarchy In The UK were powerful enough to insert the idea of anarchy, like a homeopathic remedy, into a society that was already becoming polarized. Jon Savage, England’s Dreaming

“We can’t play” was the mantra, but of course they bloody could. Other punk bands of the day, like  The Ramones, had set the tone by playing at breakneck speed. The first bone-fide British punk release, New Rose by The Damned, was equally tumultuous. Yet The Sex Pistols music was considered and full of tension. Writer Jon Savage noted that Lydon was in full control of his stage persona. “Righteous, bitter, accusatory yet mocking. His occasional hoarseness only adds to the song’s urgency.”

Anarchy In The UK became a musical milestone, as it was taken seriously, not just by a music business hogtied by its accomplished artistes, but the mainstream news media too. To them Anarchy was advocating the bringing down of British society in a three minute pop single.

This of course was ridiculous, but EMI not only dropped the single, they actually released the band from their contract. The single became one of the most collected rarities in pop history – latest price? Click here –  and the band were free to negotiate not one but two lucrative deals with mainstream record labels. 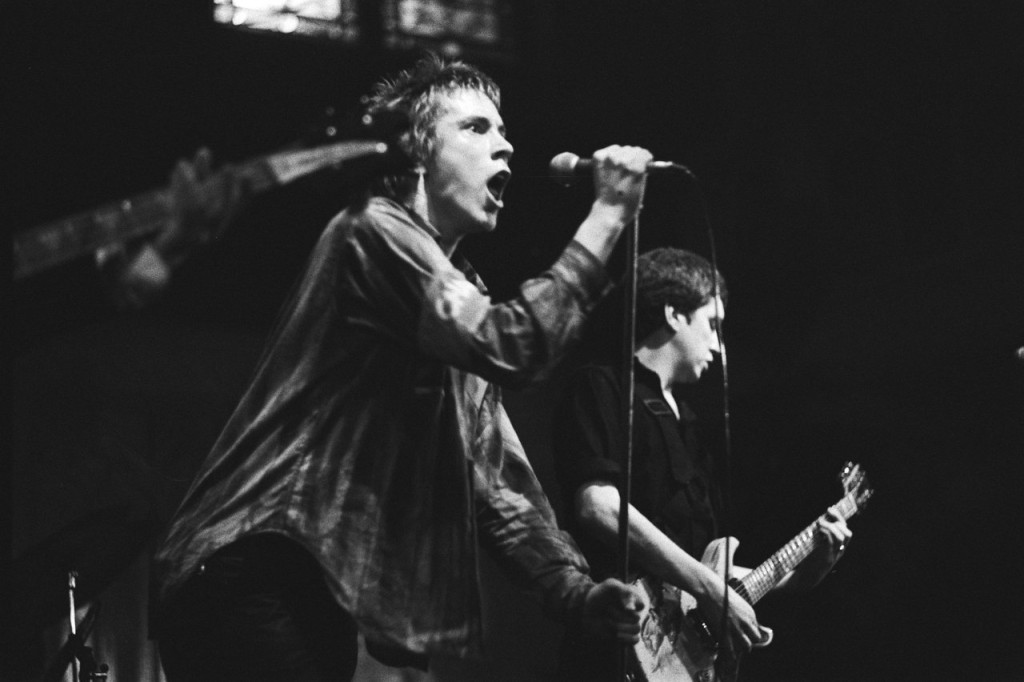