Freaks: The movie with so many questions

Home » All entertainment » Freaks: The movie with so many questions

Freaks: The film that asks so many questions

Freaks is a movie made in 1932.  Could such a film be made today? Probably not. When the film was first issued, it was banned in the UK for over thirty years.There are reports of cinemagoers fainting, screaming or running from the theatres. And this wasn’t because of any chilling special effects.

Yet the version that was released had been extensively cut – with the worst parts taken out. What audiences were seeing was the sanitised version but still people fled in horror.

Many years later , the film became a cult classic and I went to watch it. After all this time, I still don’t know what to make of the rights and wrongs. The plot is nothing special. It’s a relatively simple story of love and betrayal set in circus. Of course the circus had – as was common in those days – a sideshow, a freak show.

What horrified viewers was the fact that the performers in the freak show were not actors who were made up to have deformities – they were genuine. 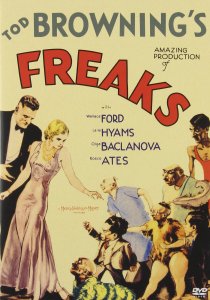 The majority of the critics were scathing. The director’s career was ruined. The film featured co-joined twins, people who had been born without limbs, microcephalics (known as ‘pinheads’) and various other more ‘normal’ sideshow attractions such as midgets, human skeletons and bearded ladies.

People in the 1930s were more accustomed to seeing ‘freaks’ as entertainment than we are today and yet still they were horrified.

A freakshow was a profitable attraction.

Should this film have ever been made? Did the actors value having legitimate work? The medical conditions that some of them suffered caused them to be  of low intelligence – is this exploitation?

I’m still not sure.