What is fugo fish? 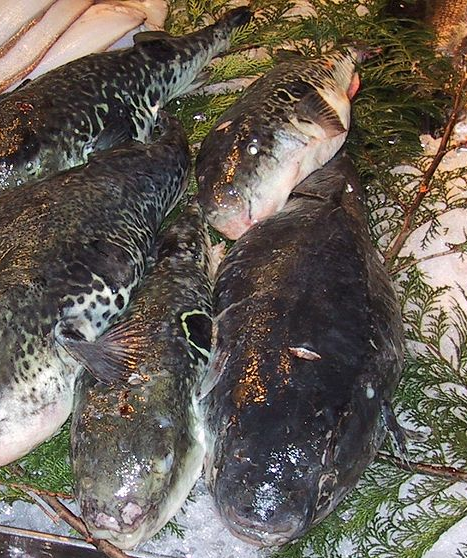 Most cities in Japan have at least one restaurant that serves fugo fish almost exclusively. The problem is that, unless it’s prepared extremely accurately and professionally, this fish is poisonous.

The most poisonous part of the fish – which incidentally is a type of puffer fish- is the liver.

But other organs can contain the toxin too. For this reason, the fish is not for sale to the general public and only accessible to experienced chefs.

To be honest,I think that’s just a little crazy. Well, a lot crazy.

There are so many fabulous foods to eat – probably more than anyone could eat in an average lifetime – so why do people want to eat something that could kill them?

Do these fish really taste better than chocolate? Really, really?

When I’m not being a proper vegetarian, I like fish. But I still don’t think that I’d eat a fish that could be fatally poisonous.I’d rather have a four cheese pizza, thank you.

And it’s not just a mild poison that will make you a bit poorly- the toxin in this fish is more than a thousand times deadlier than cyanide and there is no known antidote.

This splendidly-named gentleman is a case in point. Born in Japan in 1909, he was a child actor who also found acting fame as an adult. In January 1975, he went to a restaurant in Kyoto with friends. Fugo was on the menu. He ordered four portions of fugo liver. This was banned at the time but nevertheless, he was convinced that he would not be affected by the poison.

A few hours later, during which time he suffered convulsions and any number of unpleasant symptoms, he died. Evidently there are several deaths a year because of people eating this fish.

Available in the USA

Since 1989,this fish has been imported from Japan. However, all the toxic parts must be removed first. It is banned in Europe

Japanese scientists are searching for an antidote

Is it really so good to eat? Is it truly delicious?  Scientists are trying – and have been for many years – to find an antidote to this poison. They have not been successful. Breeder claim to have  created a non-poisonous version of the fish but diners reject it for not having the exact same taste. Is this fish truly so tasty that it warrants what must be  huge amount of money being spent on research?