They were an unlikely couple but it’s hardly surprising that they got together. In October 1947, the liner Durban Castle was making its way on a voyage between Cape Town and Southampton. Eileen Gibson (known as Gay) was a twenty one year old actress and a first class passenger aboard the ship. 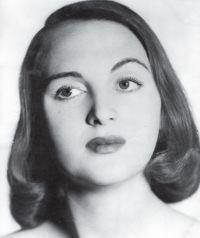 James Camb was also on board but the thirty one year old was an employee; he was a steward aboard the ship. And although it’s more than likely that the shipping line had rules forbidding liaisons between passengers and crew, Gay and James soon embarked upon on – presumably of a sexual nature.

And why not? They were both young, single and attractive. The atmosphere aboard an ocean liner was conducive to fleeting pleasures. Both were adult and, it is to be presumed, experienced with members of the opposite sex – James Camb particularly so.

In fact, he was a known womaniser. He was well known, and probably secretly admired by members of the crew, for having relationships on a regular basis with passengers – women he would never see again once the voyage was over.

And after his hour of pleasure with Gay Gibson, he didn’t see her again. No-one did because in the early hours of October 18th, 1947, James Camb stuffed Gay out of her cabin’s porthole into the shark-infested ocean.  We don’t know to this day whether she was dead or alive but the fact is that her body was never found.

The disappearance of Gay Gibson

The last time she had been seen alive was at about 1am. She was up on deck smoking a cigarette ans told a crew member that it was too hot to go to her cabin. But just before three in the morning a steward, Fred Steer, went to her cabin because her bell had rung. This was the bell that passengers used to summon a steward or stewardess.

He later testified that he had found the door unbolted and James Camb inside who said that everything was fine. Fred Steer assumed that he’d simply meant that he had been taking care of whatever problem Gay Gibson had that had caused her to ring for a steward.

But the next morning Gay failed to appear and the ship was searched. She was nowhere to be found. The captain immediately assumed that she had fallen overboard and turned the ship round to conduct a search. Nothing was found. The captain was informed that Camb had been seen in Miss Gibson’s cabin at the time she disappeared…..

At first, he denied that he had been in the cabin but the evidence make his denial impossible. It was then discovered that he had scratches on his arm – had they been caused by Gay trying to resist being murdered? Camb said that he’d make the marks himself by scratching at a rash.

Nevertheless, when the ship arrived in England the police arrested him for the murder  Gay Gibson.

He admitted that he’d lied when he said that he hadn’t been to her cabin that night. Indeed, he told the police that they had had sex. He insisted that this had not been rape but that she had encouraged him, not that the ship’s Lothario needed much in the way of encouragement.

He told police – and later the court – that they had been making love when she had had a seizure and died. In a panic, knowing that liaisons were against the company rules, he had disposed of her body through the cabin porthole.

At his trial he appeared to be quite confident when his questioning began but soon realised that he was believed to be a murderer. He admitted that he’d changed his story several times. He could not explain why he hadn’t called for help.

It seemed that the jury was divided

But as the trial proceeded the prosecution submitted material evidence – bloodstained sheets from Gay Gibson’s cabin bed. Experts testified that in addition to blood-stained saliva, urine was on the sheet and an eminent doctor testified that this was because Camb had strangled the woman.

He was sentenced to be hanged

But at that time, the British government was starting to question the morality of capital punishment so until the laws were more clear Cambs was sent to Wakefield jail.

But could he be hanged when no body had been found?

In seventeenth century England, three men had been hanged for murder and yet some time afterwards, the ‘victim’ turned up safe and sound. So after than, the legal maxim was ‘no body, no murder’. This rule was not abolished in the UK until 1954 so Cambs was saved from the hangman.

He was released twelve years later due to his exemplary behaviour. But shortly eight years he was convicted again, this time for sexual offences involving schoolgirls. to the public, these offences make it even more likely that he had murdered Gay Gibson.

He was released from jail in 1978 but died shortly afterwards due to a heart failure.

James Camb maintained his innocence until the day he died.