In 1999, Beatle George Harrison was attacked in his own home. 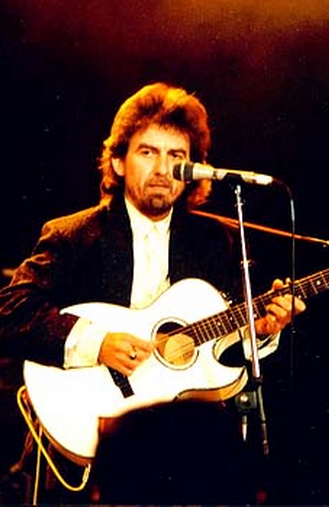 We like to think that we are safe in our own homes but in the early hours of December 31st, 1999, George Harrison and his wife Olivia were brutally attacked by a man wielding a knife in the Friar Park home. George said later that he was sure that he would die.

George and Olivia had been watching television that night and had gone to bed at about 2am. Their son Dhani was staying  in a lodge on the property with a friend and Olivia’s mother was also staying with the couple but in a different part of the huge house.

About an hour after George and Olivia had gone to bed, a man called Michael Abram managed to enter the grounds due to the perimeter fencing not being in good shape. He had a history of drug addiction and had recently become obsessed with the Beatles for reasons known only to himself. The only connection was that he was from their own home town, Liverpool.

Although the house had been fitted with a burglar alarm, it failed to operate. But Olivia heard a noise downstairs and woke George, who immediately went to investigate. When he got to the top of the stairs he was Abram in the hallway below. He also saw that the intruder had a spear in one hand and a knife in the other. George tried to get back into the bedroom but he found that the door was jammed. He had no option but to confront Abram.

But Abram had heard him and rushed up the stairs towards him, screaming. He knocked George to he ground and began to attack him. Meanwhile Olivia  was calling the police but there home was out in the country and she knew that it would be quite some time before help arrived.

Olivia, having completed the call, went out to see what was happening. She saw George on the floor with Abram attacking him. She grabbed  heavy brass poker and began to hit the attacker for all she was worth but this meant only that Abram turned his attention to her.

George had been stabbed several times

Blood was pouring out of his wounds but he tried to defend Olivia but again, Abram stabbed him – this being the deepest and worst of the wounds he had so far received.  He later said that he was sure that he was being murdered. Olivia saw him being attacked and cracked a heavy table lamp over Abram’s head but the man seemed to be possessed. As George fell to the ground, the attacker grabbed Olivia. There seemed to be no way for the couple to escape from this madman and just as Olivia was giving up hope, the police arrived and quickly overpowered the intruder.

George Harrison: Behind the Locked Door

Their son Dhani had been alerted by the sounds of the police sirens and he had rushed to the house to see his father covered in blood, struggling to breathe and losing consciousness. The paramedics were the next to arrive and they immediately started to work on George but Dhani said later that he was sure that his father was dying. The paramedics continued to work for twenty minutes, trying to staunch the flow of blood and putting him onto a drip.  They then transported him and Olivia, who was less badly hurt, to the Royal Berkshire Hospital.

As it turned out, George had been extremely lucky. The worst of his wounds was just half n inch from a major artery between the heart and the head. Had it been severed, he would have died before medical help arrived.

George had always suspected that there would be a payback time for the success and wealth he had achieved as a member of the Beatles. During his time with the group, there had been death threats and many dangers but they had never been hurt. Finally, he felt, they had caught up with him. Olivia later said that the fact that George had almost been killed in his own home left him ‘shell-shocked’ for the rest of his life. His close friends agreed.

Less than a year later, George Harrison died of cancer at the age of fifty eight.