The kidnapping of Giovanna Amati.

If you were a Formula One fan in the early nineteen nineties then you’ll remember Giovanna as a driver for the doomed Brabham team. The team, which started in the nineteen sixties, had been successful but by the time Giovanna (only the fifth female driver in Formula One) was recruited Brabham was in trouble.

It’s thought that Giovanna was signed up by the team not only because she was successful in junior formulae, also because she was a woman. Brabham needed money from sponsors if it was to survive the season and signed up an attractive young woman must have been an interesting ploy to attract sponsorship money. 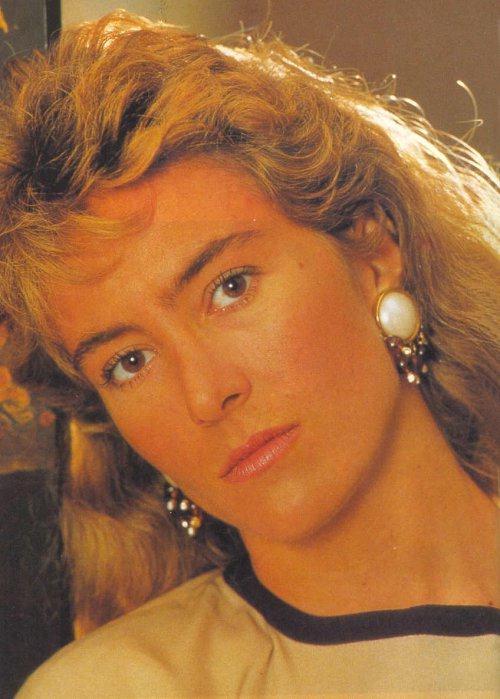 But the car simply wasn’t up to scratch and although Giovanna entered three times, she failed to qualify. Brabham changed tactics and ditched her in favour of Graham Hill’s son, Damon. Maybe a famous name was more attractive to sponsors? Although Damon was to achieve success later, he could not save the team. For the next eight races, he only qualified twice.

Giovanna, born in Italy, was brought up in a wealthy household. Her father, was a film director and owned a large chain of movie theatres; his much younger wife was a volatile actress. But when Giovanna was eighteen, something happened to her that seemed to be more like a plot from a movie shown at her father’s theatres than reality.

Giovanna was sitting in a parked car near her home when she was grabbed by a gang led by young Jean Daniel Nieto. Nieto was a known French gangster or ‘gentleman bandit’ as he styled himself. The gang whisked her away to an apartment where she was kept in a wooden crate. For seventy five days.

The kidnappers demanded 800 million lira for her return. (That was nearly a million dollars in 1978).

But while the police were investigating, Giovanna was being badly treated by her kidnappers — except one. Jean Daniel Nieto was sympathetic to her plight and protected her from suffering more at the hands of the gang. She said afterwards that he had comforted her and looked after her during her ordeal.

Kidnappings were rife in Italy at the time and the authorities were trying hard to put a stop to the epidemic. A judge froze Giovanna’s parents’ bank accounts to prevent then paying the ransom. But her mother sold her valuable jewellery collection and, legend has it, her father took the box office takings from hos movie-theater chain – notably from the success of Star Wars. The ransom was paid.

The relationship between Giovanna Amati and Jean Daniel Nieto

Today, Giovanna says “All the stories that you have read in the newspaper were wrong, completely wrong. When I went out I just wanted to come back to my family and to get all the group arrested. These are stories that the media put out.”

What were those stories? It was widely reported that the rather glamorous Nieto and pretty young Giovanna had fallen in love during the time she was kept in the wooden crate. Many newspapers at the time reported this relationship. Neito denied it too in the media of the day. 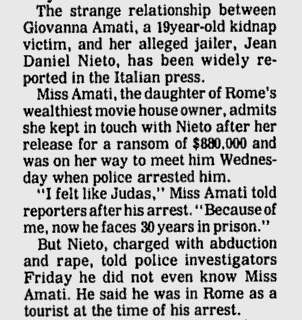 But he didn’t get 30 years in prison, his sentence was for eighteen years. After eight of those years he escaped from jail. He committed another kidnapping, was arrested and return to jail. But he managed to escape again.

Fast forward more than twenty years. He might have remained on the run had it not been for an eagle-eyed ticket inspector on a train. Nieto drooped his ticket and when he bent over to pick it up, he accidentally revealed that he had a green tattoo of a gecko on his neck. It had five dots along its back.

These five dots, as the ticket collector knew, were marks of an ex-con. Or in this case, an escaped con.  The man alerted the authorities and Nieto was arrested. For twenty years he had been living quietly in France, and was now a grandfather. He did not resist arrest. He said:

“It took you twenty years to find me. Here I am, here I am, quiet. Now I have become old. At one time it would have been different.”