Who was Helene Stanley? 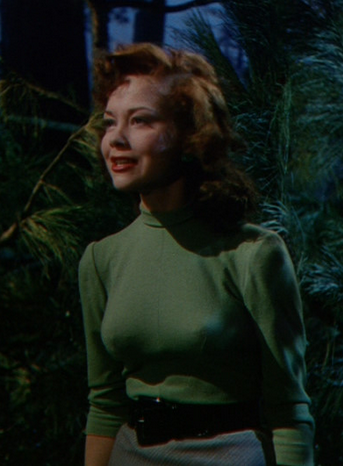 There are many people who left  an important legacy to the world of Hollywood movies but I imagine that if most of us were asked to list them, the name of Helene Stanley wouldn’t feature.

But she left a lasting legacy to the Golden Era of Hollywood and it will probably surprise you. She certainly made a handful of movies but her lasting legacy was to make two films that have never been seen by the public but that are still enjoyed today. What a conundrum!

In the early Walt Disney days, the animators who created such classics as Snow White and the animations mentioned above, worked carefully from specially made full length films with real people playing the parts which they then painstakingly copied.

When I discovered that Helene Stanley had been the ‘live model’ for Sleeping Beauty and Cinderella, I imagined that this meant that she was drawn by Disney artists and that they used the drawing as a basis for the character. But in fact, the entire films were made using real actors to be copied.

You can see Helene in the very short video below.

She found that the work was more difficult and exacting than regular filming work. She said ‘Everything had to be picture perfect; every movement had to be just right.’ She was still in her teens when she worked for Walt Disney but says that the studio was like a big happy family. Although she admits that the eighteen months that it took to create the base film for Sleeping Beauty was hard work.

The animators would work from her live performances when she was being filmed and then from giant blow ups of each frame of the film. There was no tracing involved – everything was drawn freehand. Helene was also the live model for Anita in 101 Dalmatians.

Sleeping Beauty and the Mobster 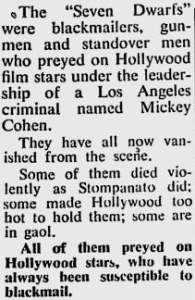 Curiously, Helene’s first husband was was small-time mobster, Johnny Stompanato, who was murdered just three years after the couple divorced. Equally curiously, he was part of a mob that were named after an earlier Disney movie – the gang was known as the Seven Dwarfs. See the newspaper extract on the right.

The cutting is correct when it states that the Seven Dwarfs preyed on Hollywood stars. Although the reason Helene divorced Stompanato in 1955 was recorded as ‘cruelty’ it’s widely thought that that a great part of the reason was that Stompanato was having a torrid affair with Hollywood star Lana Turner.

As it says in the newspaper extract, Stompanato met a violent end – he was stabbed in Lana Turner’s apartment, apparently by the actress’ fourteen year old daughter. You can read more about that here. Or, as her final companion revealed, maybe it was Lana herself who murdered him?

Whatever the truth – and we may never know – it’s a stranger story than anything that came out of the Disney studios.

Although this video is about the making of the earlier Snow White, it’s still fascinating to see how those early Disney films were made.