Who Lost His Address Book from a Helicopter Over the Greek Islands?

Home » All entertainment » Who Lost His Address Book from a Helicopter Over the Greek Islands?

It’s no secret that I am obssessed with watching old episodes of What’s My Line on You Tube. I mean, the old versions from the late fifties and early sixties. They are simply brilliant. And one of my favourite panellists was Dorothy Kilgallen.

She was very astute. especially when it came to guessing the identity of the mystery guest. If you’re unfamiliar with the show, the mystery guest was a famous person, usually from the world of entertainment,  and the panel were blindfolded. By asking questions (that could be answered with either ‘yes’ or ‘no’) the panel’s task was to determine who the guest was.

Miss Kilgallen – the show was terribly formal in those days – was a journalist and radio show host so knew ‘everyone who was anyone’ and sometimes asked questions such as ‘did you and I have dinner together two weeks ago?’ if she had a hunch.

One of these – and she asked it several times – was ‘did you ever lose your address book from a helicopter over the Greek Islands?’ It conjures up a marvellous mental image of Dorothy and an unidentified male celebrity in the aforementioned helicopter and his address book suddenly flying out of the door. I mean, how? I was intrigued. 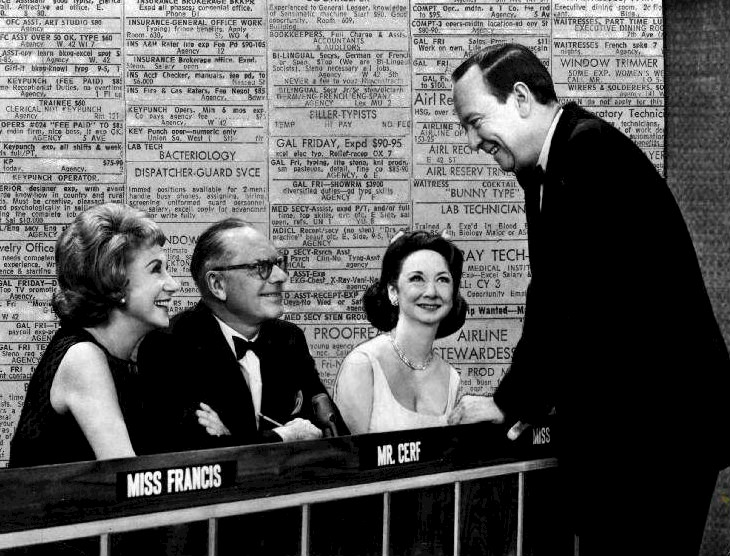 So who lost his address book?

Well, it was clearly a man because she only asked this question to male celebrities. The first was Bob Hope on the November 19 episode in 1961. He replied in the negative. She asked the same question to actor Jack Pallance in July 1964 and then the next month, to Bob Cummings. In December the question was put to Gene Kelly.

She also asked Sean Connery when he appeared on the show. All replied in the negative.

It may be that we will never know for certain but the likelihood is that she meant Tony Perkins of Psycho fame. In 1962 he had a film released called Phaedra. This was filmed in Greece, presumably the year before. (Note that Dorothy first asked the ‘address book question’ in November 1961.)

But what’s the rest of the story? Was Dorothy there in the helicopter too? Or, in her role as journalist, columnist and radio host, had Perkins merely related the story to her? Some commentators on You Tube claim that she was in the helicopter but no official evidence exists.

Or was it someone else?

However, in the episode when Dorothy asked Sean Connery if he had lost his address book, there were two mystery guests. Connery was on first, then the next was Henry Fonda. Other panellists guessed pretty quickly and Dorothy remarked:

“I was thinking about you the first time round.”

Does this mean that when she asked Sean Connery the famous question it was because she thought it was Henry Fonda and hence asked about the address book? Fonda had visited the Greek Islands in 1959 – just two years before Dorothy first asked the question.

Although the internet seems to think that Tony Perkins was the one, we have to remember that Phaedra was released in 1962 – the year after Dorothy first asked the question.

Here’s the episode with Sean Connery and Henry Fonda:

Just for fun – one of the best (non-celebrity) guests:

Do you know more about this story? Let me know in the comments section below!