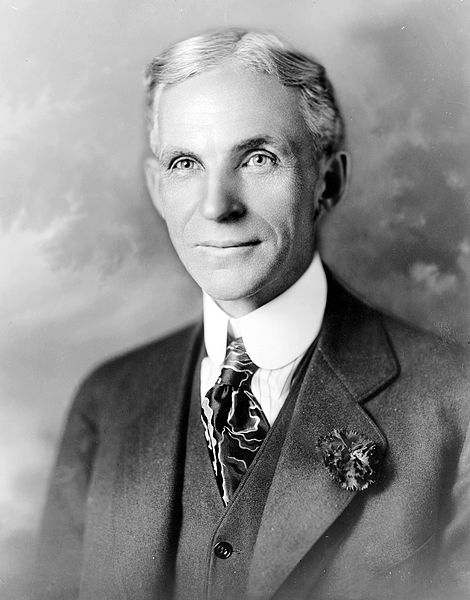 Henry Ford could be called the father of the modern motor vehicle. He was also a huge patriot.

But he did have some weird ideas.

His anti-Semitism is often mentioned but even that took a rather strange form. It seems that personally, he had no objections to Jews.

One of his closest friends was Rabbi Leo Franklin and Ford’s factory designer was Albert Kahn, a Russian Jew; the two were friends for many years.

No, his convictions weren’t against individuals at all – he believe that there was a secret group of Jews who were trying to take over the world.

Yet he was what we would call today an ‘equal-opportunities’ employer. In addition to Jews, he employed large numbers of disabled people, black people (all unusual in those days) and he paid top wages.

It was Ford who introduced the forty-hour working week.

Butto promote his own personal beliefs he bought – through an intermediary -a failing local newspaper called the Dearborn Independent.

He transformed it into a magazine in which to spread his views. He insisted that Ford dealers sell the magazine in their showrooms.

Amusingly, he tried to apply his production line methods to journalism. He experimented with the idea of ‘mass production’ articles. Individuals weren’t assigned topics or stories, as is the normal practise. Instead,  he thought it was an admirable idea to have one writer supply the facts, another to inject humour into the article, another to wrap the article up at the end and so on.

Needless to say, this didn’t work. But he insisted on this idea being put into practise for long enough to make sure that everyone was completely turned off the magazine and its articles. Ford lost a huge amount of money. It contained serious errors as well as rants against Ford’s dislikes such as jazz, Hollywood, short skirts and whatever else took his fancy to decrie.  In 1921 the magazine published an article about -how Jews degrade baseball’ specifically mentioning Harry Frazee, the owner of the Red Sox. Except the problem was, Frazee wasn’t Jewish.

Ford has the somewhat dubious distinction of being the only American who received a favourable mention in Hitler’s Mein Kampf. Hitler kept a framed photograph of Ford in his office and said that he had modelled the production methods of the Volkswagen on Ford’s factories. In the thirties, Ford was awarded Nazi’ Germany’s highest civilian award, the Grand Cross. Ford accepted.

It seemed that there was no stopping Henry Ford and his magazine, despite its almost non existent readership. But it went too far. THe magazine referred to a lawyer, Aaron Sapiro, as being part of an illicit group of Jews who had formed a conspiracy to ruin American farmers and take control of the wheat market. Sapiro sued for $1 million in damages.

Ford was scheduled to appear in court but the day before the appearance, had a strange car accident. Driving home, his car was forced off the road by two men in another vehicle. The car went down a steep embankment until it fortunately hit a tree which stopped its descent.  Some said that Ford had caused the accident himself in order to avoid the court case but this seems unlikely because his injuries were genuine. Nevertheless, the court case could not go ahead.

Although anew trial was scheduled, Ford decided to settle out of court. He sent a letter of apology to Sapiro enclosing a large cheque.He claimed in the letter to have no knowledge about any of the anti-Semitic activities of his own magazine. A Ford official who helped in drafting the letter said that Henry Ford had never even read ‘his’ letter of apology. But it worked.

However, the Independent stopped its activities.  Ford closed the magazine in 1927.

In the eight years it had been operating, it had cost him almost $5 million.